On Friday I sat down with Stuart Schrader (virtually) to discuss his new book, “Badges Without Borders: How Global Counterinsurgency Transformed American Policing,” published by the University of California Press in 2019. Stuart Schrader is the associate director of the Racism, Immigration, and Citizenship (RIC) Program at Johns Hopkins University, where he also holds an appointment as a lecturer and is an assistant research scientist in sociology. “Badges Without Borders” shows how the U.S. has provided foreign assistance to police forces around the world to facilitate U.S. capital accumulation and the expansion of U.S. empire. He also shows how this process of global counterinsurgency boomerangs back home and shapes and intensifies the militarization of domestic policing. 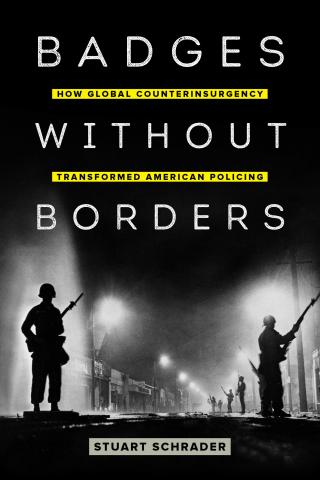 He has also recently written a review article titled “Rank and File Antiracism: Historicizing Punk and Rock Against Racism,” which appears in the Radical History Review Issue 138. This piece has a companion playlist, from which we draw a couple of tracks for this show. Professor Schrader’s writing has been published in a variety of academic journals and has also appeared in the Baffler, Boston Review, The Nation, Jacobin, and more. He also has edited a music magazine, shit-fi.

In the show we discuss Rock Against Racism and how to link the movement with specific moments and crises of capitalism and reactions to fascism, which gives a fresh and fruitful approach to studies in political economy. We then dive into a discussion of “Badges Without Borders.” We discuss counterinsurgency, or countersubversion, during the cold war, as well as how programs of police assistance come back home and shape the war on crime and the rise of the carceral state. We also talk about the transfer of surplus military material to police forces, the business of repressive technologies and the supply and demand side pressures to adopt or push this war-making tech in civilian policing. Professor Schrader also covers prospects and the future of the left, as well as ways to tackle the expansion and proliferation of new police forces, which have been bestowed with additional powers and military capacities, since the war on terror. And this is all accompanied by some great anti-fascist and anti-cop tunes.

The show aired Monday, Nov. 2 @ 10 p.m. central. You can listen to the full interview here.