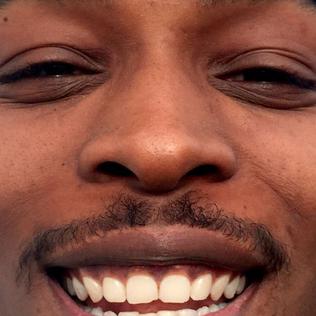 If there’s one thing Jme wants to make sure you know, it’s that his name is not stylized “JME”. The brother of grime star Skepta and co-founder of record label Boy Better Know, Jme has held his own in the grime scene with a large Spotify presence in the UK, grime’s birthplace. He released Integrity> in 2015. Having never heard any songs from the grime genre, I was unsure what Jme would bring to the table.

I was drawn in from the start. Ear-to-ear synth rolls started off Pulse 8, the first track, which gave way to a kicking, persistent bass. In the opener, Jme discusses his veganism and incorporates a lot of contemporary references (Charlie Bit Me, Words with Friends, Clash of Clans, etc.) The lack of a hook exemplifies the energy of this album; he barely allows any time to process between bars, whether it’s after a 32-bar verse or a lyrical onslaught a la “96 Fuckeries.”

Jme clearly uses this album as a means of showcasing his lyrical abilities. He makes sure the listener hears every line with sharp annunciation. The bars themselves range from corny (“If you don’t like G-R-I-M-E, then you’ve got no taste like vegan cheese” on Taking Over), to accusatory (“Well well well, you man keep hating / I come back, same flow, I ain’t changing” on Same Thing.)

I have to give Jme credit for his willingness to switch it up when it comes to production, though. While “Game” fittingly featured a beat that carried a lot of similarity to Super Mario Bros. game music, the beat for “No You Ain’t” had a braggadocious tone to it, reminiscent of Trophies by Drake. It’s the most hungry we see Jme on the album.

Jme brings in several collaborators on the album but at the end of the day, this album is about his journey; he keeps 10 out of 16 songs for himself. Oddly enough, “Amen”, the track with the most features, is the album’s shortest. Jme and fellow Boy Better Know artists Skepta, Frisco, Shorty and Jammer, manage to cram in a total of nine 8-bar verses into a mere 2:05. It’s fast-paced and perhaps most exemplifies the overall energy of the album.

One of my favorite moments of the album was Jme’s line on Test Me: “Man must think that I’m a celeb / Cause the whip cost an arm and a leg / But no, I make grime on the regs / And I saved for a year to buy one of them.” It’s a refreshing moment of honesty and emphasizes the role of hard work in getting to where he is now. On Test Me, I also was grateful that Jme lets the instrumental breathe at the 2:16 and 3:39 marks. And a good instrumental it is.

The final track, Integrity, serves as the climax of the prevalent anti-establishment rhetoric on this album. He delivers the inflammatory bar: “Any one of you cocaine snorting label executives that thinks you can take my integrity for a couple bags, think twice” to hammer this point home.

Jme may not be touring in Chicago or headed for the Billboard Hot 100 any time soon. Nevertheless, I have a lot of respect for his self-made brand. I recommend Integrity> for anyone looking to figure out if they like grime music or not. One thing’s for sure, though. Regardless of whether or not you take a listen, Jme won’t compromise his Integrity.

TRACK TO LISTEN TO RIGHT NOW: Test Me