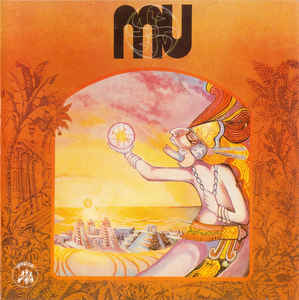 We’ve all heard of the legend of the lost continent of Atlantis, which supposedly sunk beneath the ocean before humans could get to it. There are more lost continents. One of them is called Mu. In 1971, surf rocker Merrell Fankhauser and Captain Beefheart’s Magic Band guitarist Jeff Cotton took that name, started a band and released an album. They called it, in an inspired moment, Mu, but it’s since been re-released under the name, which also must have come from a moment of genius, The First Album.

The First Album is definitely a psychedelic rock record, but the influences on the record are taken from all over. The sarcastically-titled opening track, “Ain’t No Blues,” is, in fact, very bluesy. You can hear bongos and Zamrock-esque rhythms on “Mumbella Baye Tu La” and the album’s nine-minute-long centerpiece, “Eternal Thirst.” “Ballad of Brother Lew” is folksy. There are jazzy bass clarinet solos across the album, but my favorite is definitely on “Nobody Wants to Shine.” The short closer, “Children of the Rainbow,” sounds like a Beatles B-side. Fankhauser’s shimmery surf guitar and Cotton’s smoother slide guitar are audible and enjoyable throughout the album.

It’s these wide influences that make The First Album such a satisfying listen. You never really know what you’re gonna get. You could hear shouty, spoken vocals that feel almost like they’re from a sermon (“Ain’t No Blues”), or you could get a meditative “om” (“Eternal Thirst”) that perfectly compliments the track’s quiet, off-kilter yet driving rhythm, or you could find super satisfying harmonies on “Nobody Wants to Shine.” Also, let’s be serious for a second, what other rock album do you know that has bass clarinet solos?

With all of its influences, Mu’s first album works, and it works really well. While I suppose you could listen to this album track by track, I’d really recommend listening to it all the way through in one sitting. It’s a great experience. If there’s one problem I have with this album, it’s that “Children of the Rainbow” isn’t long enough.