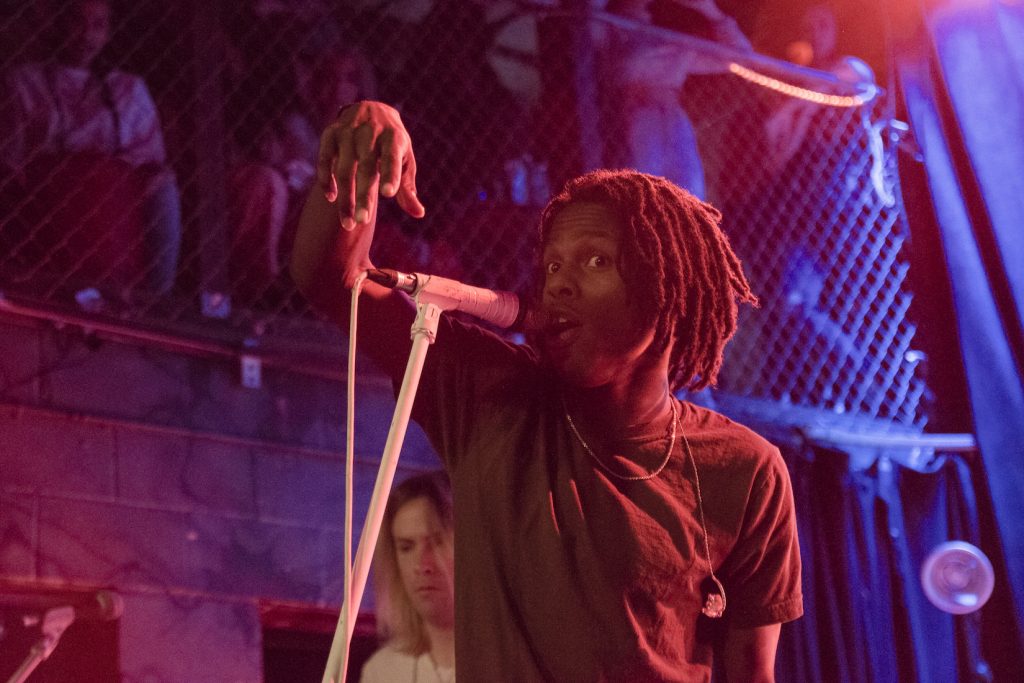 Daniel Caesar with SiR and Cherrie at Reggies Rock Club

On Monday, Nov. 20, rising star Daniel Caesar brought his growing catalog of gospel-infused soul ballads to Reggies Rock Club in Chicago’s South Loop. The sold-out show was part of Red Bull Sound Select’s 30 Days in Chicago, an ongoing concert series that has hosted a roster of artists in high demand this November.

Caesar has had a breakout year, dropping his debut studio album Freudian in August and getting pegged as one of Apple Music’s Up Next artists. Hailing from Toronto, Caesar has started to build worldwide appeal by fulfilling a largely unoccupied niche for crooning RnB with inflections of gospel music. Freudian possesses universal appeal; it could be a hit on your local top 40 radio station, be a slow jam for your date night or be the soundtrack to your long drive home. 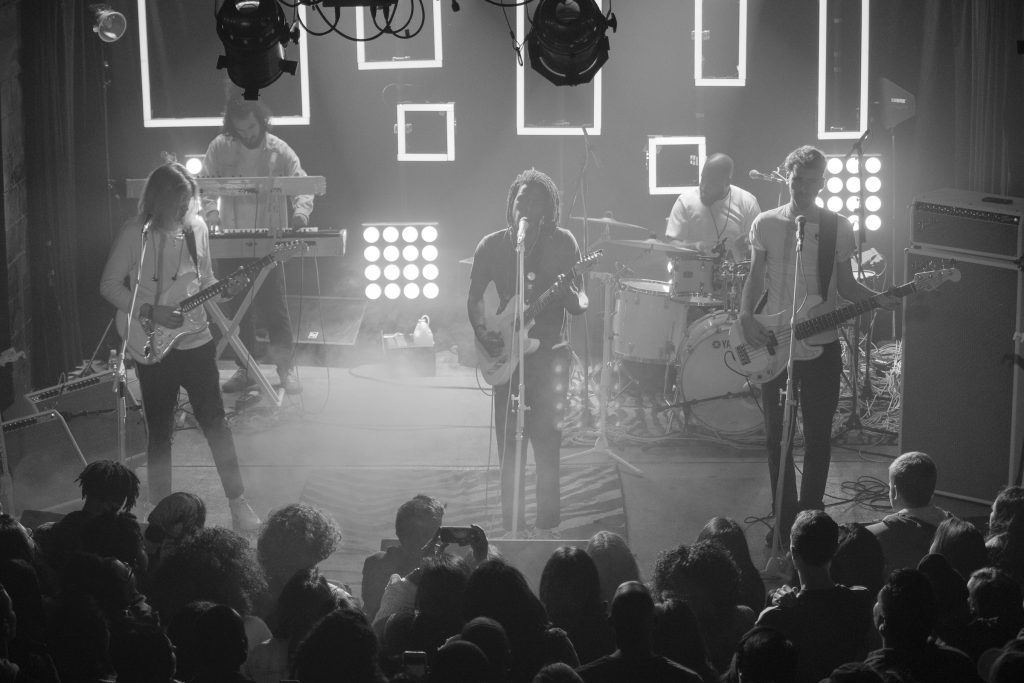 I get off at the Chinatown red-line stop, a short walk away from Reggies. It’s cold. Like really cold outside. When I arrive at the venue, I’m surprised to find only 6 other people in front of me waiting. I almost second guess if I’m at the right location until I see the glowing neon-blue sign that Red Bull has put up in front of the entrance to Reggies.

It’s 6:30 and the doors are supposed to open at 7. Where is everyone? A representative from Red Bull pokes her head out of the entryway and announces that doors are actually opening at 8. Did I mention it’s cold? There’s a shared groan of disappointment from everyone in line, dreading another hour outside in the 30-degree weather and the continual brisk, face-slapping gusts of wind.
As the line grows to around 30 people and the clock nears closer to 8, it becomes hard to ignore the fact that nearly everyone here is with a significant other. Confined to the outer walls of Reggies and snaking down a small stretch of sidewalk on State street, couples brace the winter chill together, sharing headphones, faces illuminated by phone screens to pass the time. 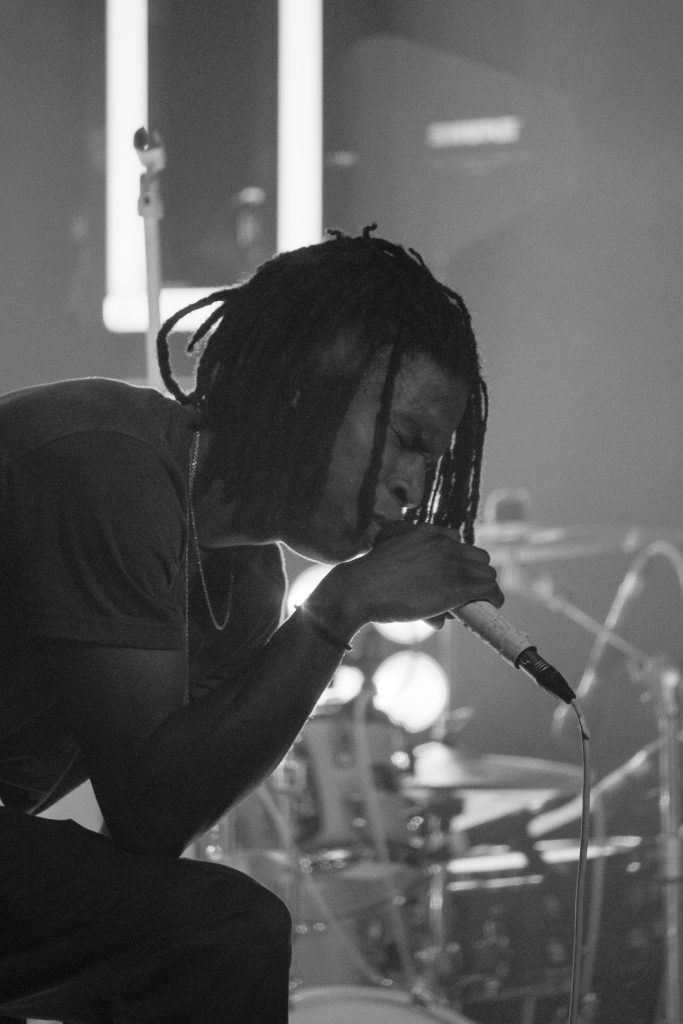 It only seems right that you go see Daniel Caesar with your boo. Freudian basks in the light of new love, providing a joyous depiction of the peaks of being in a romantic relationship. At the same time, Caesar also explores the pitfalls of heartbreak with striking honesty and self-reflection. The result is a vulnerable, emotional journey that listeners can connect with, while Caesar weaves in elements of his personal experiences.

A communal sigh of relief fills the air as doors open and people rush straight to the stage. Within 15 minutes, the tight 400-person space is nearly packed and the crowd starts to overflow onto the balcony. 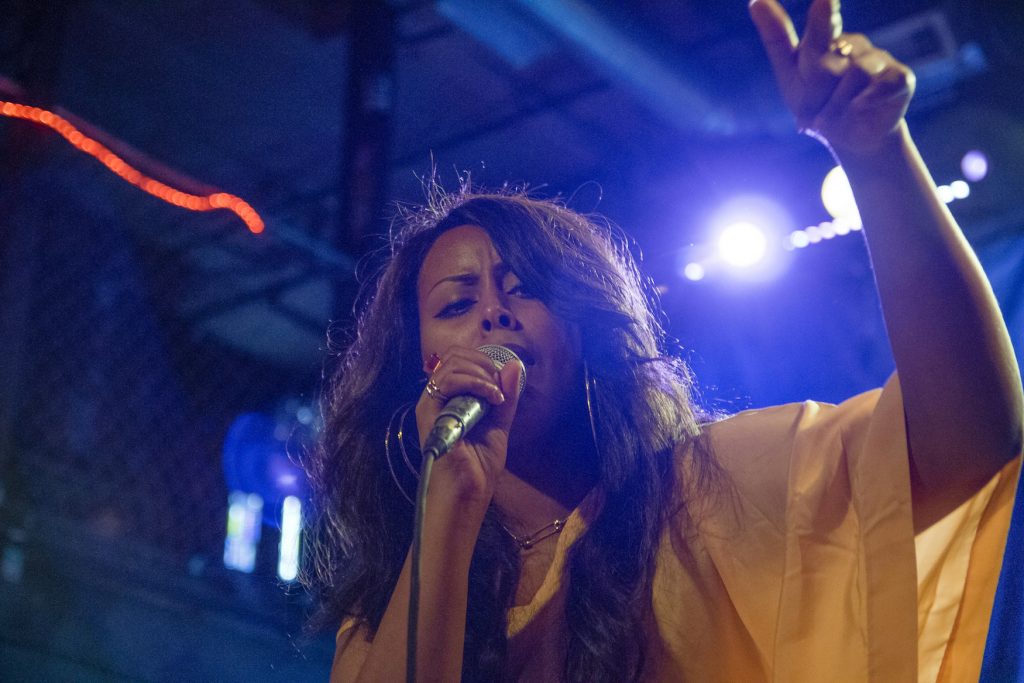 The first opener, Cherrie (pronounced like “sherry”,) hits the stage shortly after. Hailing from Sweden and singing in Swedish, she’s an unfamiliar artist for most of the audience. However, by the end of her short set, she leaves a noteworthy first impression. Multiple times throughout the performance, she explains how she’s surprised that the Chicago audience still shows her love despite the fact that the vast majority of the room has no idea what she’s saying. Language barrier aside, Cherrie’s mix of electronic production and seductive pop melodies raise the hype level in the room significantly. 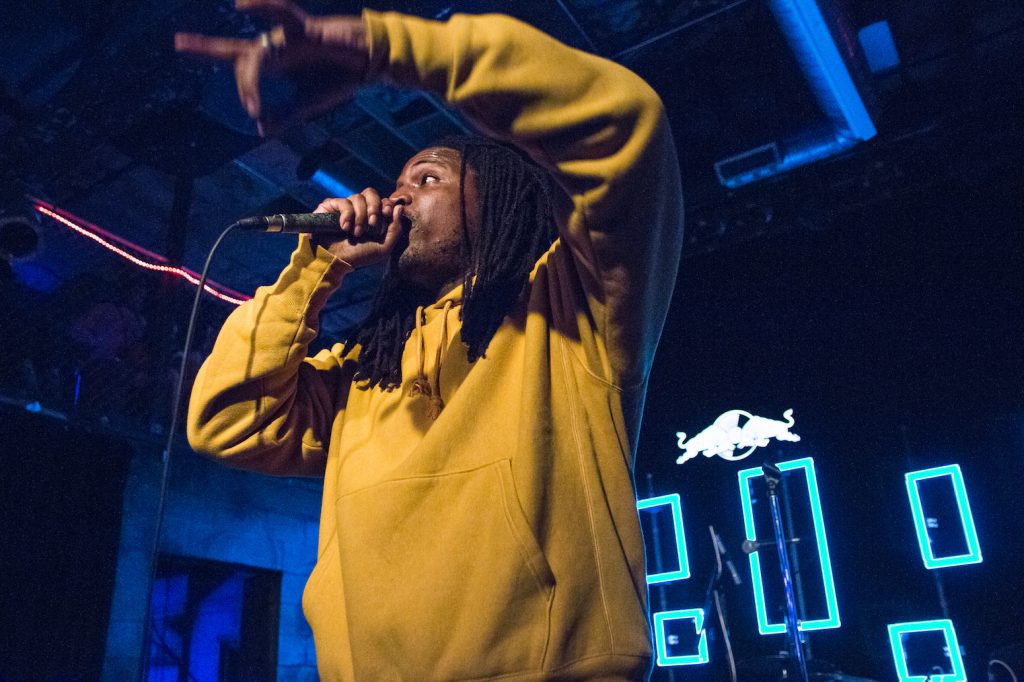 Burgeoning soul singer SiR takes the stage next. He starts things off with a set of downtempo, sensual love songs. It’s a somewhat unexpected change of pace from Cherrie, but the California native connects with listeners nonetheless. At times it gets hard to focus on his performance as everything gets drowned out in an overblown wave of bass. SiR’s silky vocals still come through in the end and hold the crowd’s interest, leaving everyone asking for more.

A four-person crew promptly gets the staged ready for Daniel Caesar, moving a DJ set off the stage and putting a white drum set in its place. A full band of instruments of the same pearly hue also gets brought on stage, with an electric Fender positioned front and center–Caesar’s guitar. When the crew finishes, the lights dim and it’s show time. 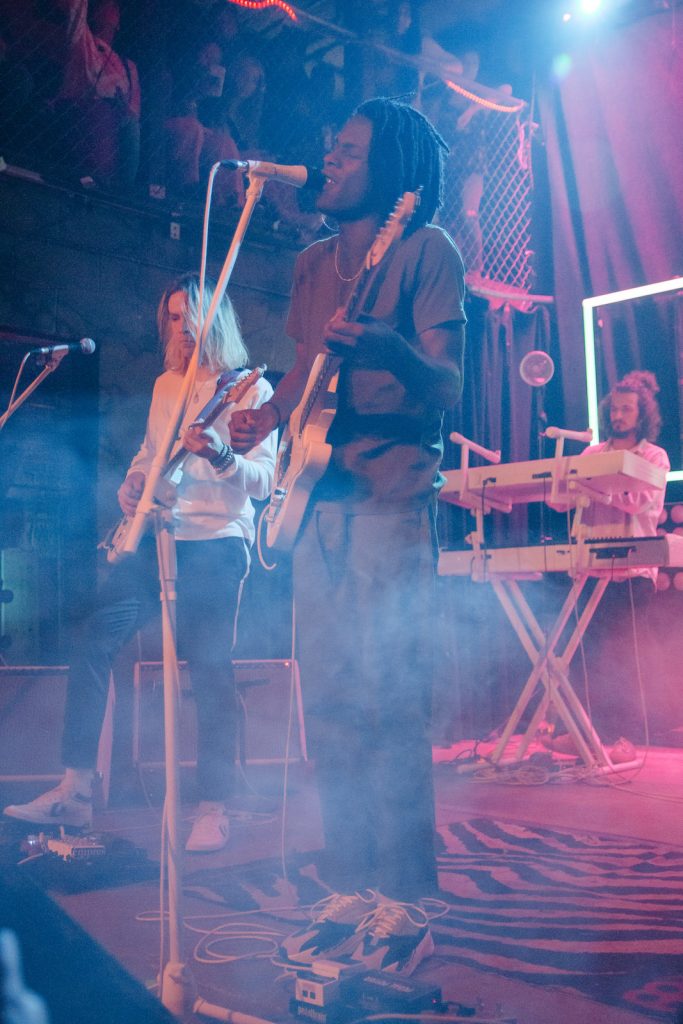 Caesar’s band gets behind their respective weapons of choice as a choir-sung interlude builds in the background. The steady first drum taps play, followed by the opening chords of “Japanese Denim.” Caesar graces the mic just in time to sing the first seductive notes, and the floor of the stage gets clouded in a layer of smoke. He grins through the first verse as bouts of applause and screams ensue.

The most powerful qualities of Caesar’s music get accentuated in his live set. The smoothness of his voice is more noticeable when he has free reign to hold out notes as long as he pleases, unconfined by a recording booth. Performing with a full band, the simple instrumentation gets elevated, each guitar strum more poignant and each kick drum more punchy. When Caesar straps on his own guitar and plays it interchangeably throughout the night, he navigates each song with confidence, nodding his head in approval of his own abilities. Caesar comes off like a seasoned veteran on stage, commanding the audience with relaxed finesse. 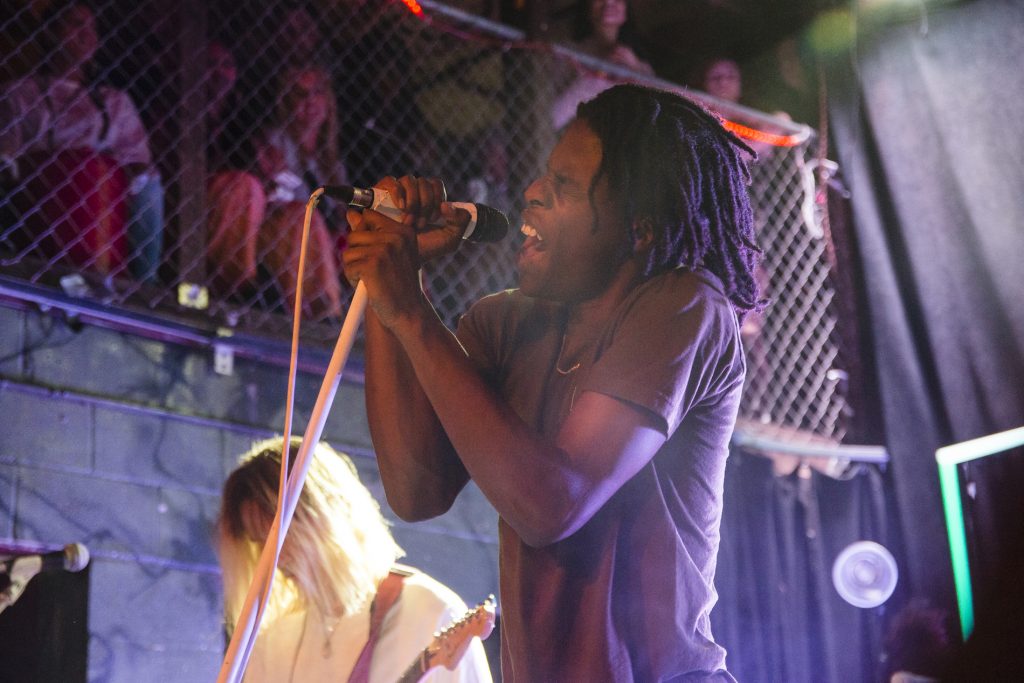 As the night winds down, everyone knows it’s not quite time to go home yet. Not until Caesar plays his biggest song to date, “Get You,” will the night feel complete. The song’s muddled bassline emanates and Caesar fulfills everyone’s anticipation. When he gets to the first chorus, the whole room joins in. He tilts the mic toward the crowd, bringing everyone together for the finale. Arms wave, faces glow and Caesar gives one last thank you as his band plays him out.

The lights come back on and clusters of people make their way outside, calling Uber’s and hustling to train stations. I hitch a ride with a couple of Loyola students, and we wait around the corner to be picked up. It might be even colder now than it was waiting for the show to start, but I don’t really notice. My mind is still inside Reggies, encapsulated in the wake of Caesar’s soothing melodies. The warmth resonates with me all the way home. 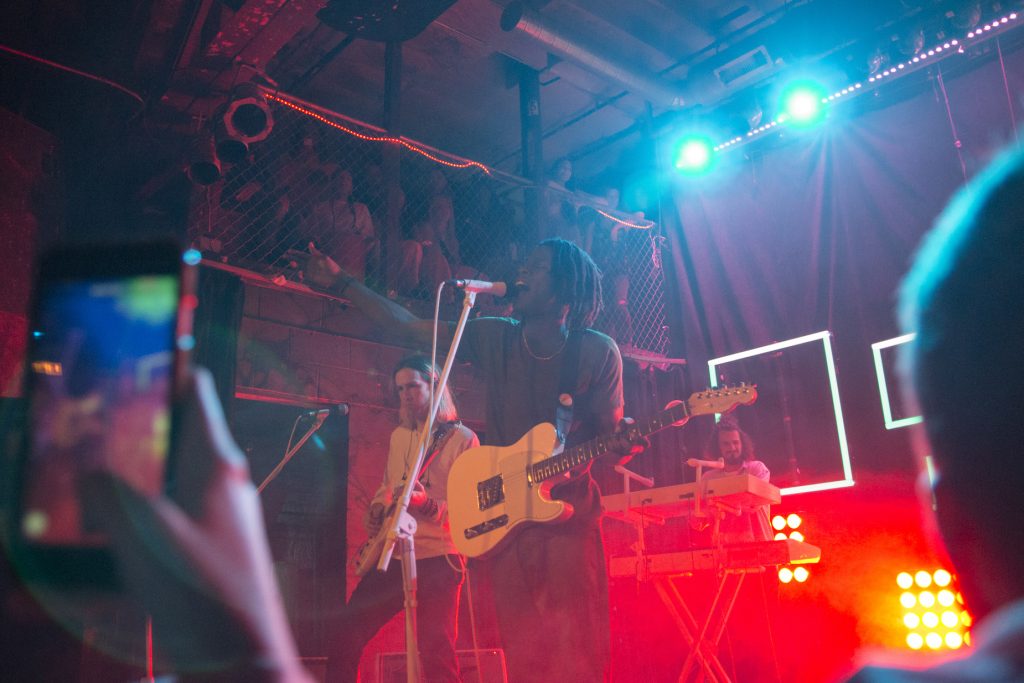