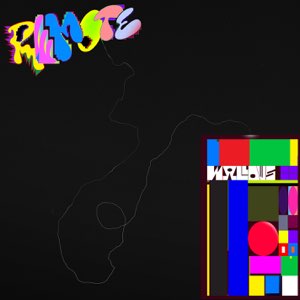 Fans of Wallows know and love their introspective alt-rock music. After almost a decade of working together, the trio decided to try something new when they released their Remote EP Oct. 23.

A stark contrast from their mellow breakout album Nothing Happens, Wallows’ Remote EP is six tracks bursting with energy and good vibes. After the release of their hit album in 2019, the LA-based trio was set to take the stage at festivals across the country, but the COVID-19 pandemic put much of their growth and exposure on pause. Rather than continue working on their next album, the group decided to spend their quarantine time coming out with a project to lift fans’ spirits.

Remote opens with “Virtual Aerobics,” a retro-themed track released at the beginning of October with an accompanying jazzercise lyric video. Vocalist/guitarist Dylan Minnette, vocalist/lead guitarist Braeden Lemasters and drummer Cole Preston show off their 1980’s-inspired moves while dancing to lyrics of overwearing Nike’s, grapevines and side-kicks.

“Dig What You Dug” is one of two songs Lemasters sings on the EP. When contrasted with Minnette’s calm, low voice in the post-chorus, Lemasters’ uplifting, higher voice gives a shoulder-swaying groove to the song. Together, they sing “Wondering when they’re gonna give a shrug / You’re scared that they’re gonna dig what you dug” for a satisfying combination of styles.

Out of the six songs on the album, “Coastlines” is probably the most similar to past Wallows tracks. Even though it fits with the rest of the Remote sound, “Coastlines” evokes the same melancholic feeling found in last year’s hit song “Are You Bored Yet?” and “These Days.” Minette manages to effortlessly combine passion and monotony while singing “I don’t wanna think about it / If I’m really wastin’ all of your time / I don’t wanna think about it / When we’re on different coastlines.” An angst-filled three minutes with short upbeat breaks after the chorus, “Coastlines” brings back the new indie sound the group is known for.

The powering down effect in the final seconds of “Coastlines” blends seamlessly into the penultimate song of the EP, “Talk Like That.”Ironically enough, the fastest song on the EP is sandwiched between the two slowest songs. A fun number about the power of words in a relationship, “Talk Like That” brings out a dance-like-nobody’s-watching type of energy. The fast-paced song opens with Minnette spewing “Cut my heart it half, give it back, when you talk like that / Probably all in all, if they call, get a heart attack / Feels more like your death, lost my breath, can you give me more? / Do it all again, by the end, tell me I’ll be yours.” Although only a second shorter than “Virtual Aerobics,” “Talk Like That” is the shortest song from Remote, clocking in at two minutes and one second. The jump-around feeling is short-lived but completely worth it.

Remote concludes on a sentimental note with “Wish Me Luck,” and the transition to it is once again flawless and more explicit than the previous one. “Coastlines” ends with a spoken outro: “Hey John, that one was pretty good, but uh, how do you change the station on this thing?” This could be the beginning of Wallows starting a story line in future works, or it could tie into the third and final video in the Schaefer’s House Party trilogy. No matter the context, “Wish Me Luck” is a song that truly showcases the growth of this on-the-rise trio. The beat is mesmerizing, the echoes and synths are perfectly executed and the lyrics are catchy. Wallows tried something new with Remote and hit it out of the park. A cohesive yet diverse Extended Play, Remote can provide a much-needed sense of joy for indie fans out there.