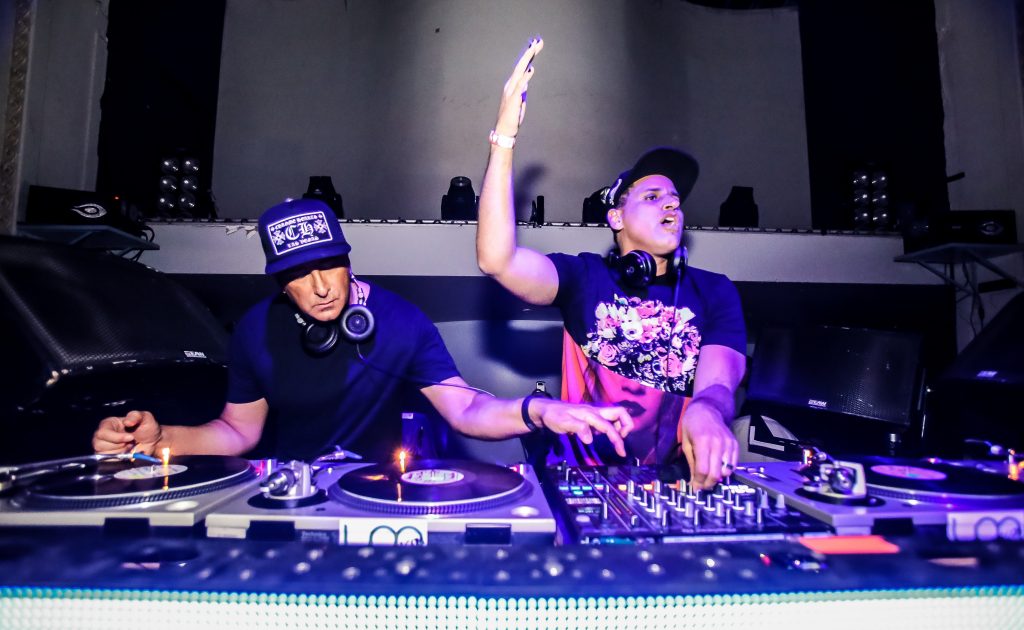 Q: What is your goal with the all vinyl tour?

Richard: You know there’s definitely a couple aspects of why we’re doing it. One of them is just to bring back the art form again because we felt like the art form was being lost, and its no disrespect against people who play on CDJs, we play on them and I’m sure we’ll go back to play on them. But there was just an art form that we felt was missing from DJing and kids that haven’t seen it. We also wanted to challenge ourselves again, mixing on turntables is no joke. The first day we decided to do this tour I hadn’t mixed on turntables in 12 years. I couldn’t even find my turntables. When I got on them, I was train wrecking, I couldn’t believe it and I thought what did we get ourselves into, this is hard! It took me at least a week to really get into the groove, because there’s a skill to that.

Bill: Exactly the same reasons, it’s the art, its exposing to a new generation, that’s really for me, it didn’t exist, the kids now days don’t have any clue about it. (Vinyl)

Q: What has been the hardest thing you’ve had to deal with in a set?

B:The hardest thing we’ve dealt with was in Atlanta last Friday, somehow between sound check between us, and doing the performance, there is a setting on the Pioneer mixer that compresses the output of the booth monitors. So were blasting the monitors, and we literally cant mix on beat when there’s compression, so were like what the hell is going on. So we had to DJ this whole set with compression in the booth monitors, that was the toughest thing at least that I’ve had to deal with.

R:Tough night for us, I mean we know when we play a good set, were our hardest critics. We record the set for ourselves, nobody else gets to listen to it, we listen back and say, alright we need to tighten that up, that could be a little bit better, come on Bill (haha).

Q: So you guys are like constantly practicing and listening in just to make sure?

R: Yaya and tweaking anything and trying out different things, lets try this lets try that.

Q: And you guys have been working together for over two decades? How did you guys meet?

B: I had booked up his group, he had a group called the movement, I used to throw parties as well and I booked them, then he actually booked me up for his club in LA, then after we performed he was like “yo do you wanna jump on?” And I ended up DJing at this club, and I’d never seen a club like this before it was called the Dome. It was a Saturday nightclub in LA with like 2000 people, Go-go dancers. We didn’t have anything like that in Chicago, so I was actually a little nervous like this is insane I’ve never seen anything like this. So they let me play for like 30 minutes or whatever, and we went back and fourth, where he’d bring me out or whatever and we’d start changing and exchanging records.

Q: When did you guys start actually getting together for gigs?

R: We did a CD we came up with an idea of House Connection, saying what if we both played at the same time on four turntables. At that time it was groundbreaking, because there were a lot of guys who would do a mix CD with one guy doing one CD and the other guy doing the other, so we thought what if we do the whole CD because our styles work. Certain things he compliments me on and certain things I compliment him on. There was something better with us doing it together, and that’s how House Connection 1 and House Connection 2 began and we started touring.

Q: How do you think your styles differ?

R: I think Bill is definitely into a funkier groove. I’ll try off the wall things sometimes, that may or may not work, but we both like the funky stuff. We also both like the excitement of playing a record that changes the energy of the room.

B: Ya what I think is that I’m a little more technical where he’s a little more creative. He wants to keep it musical or vocal, and I don’t care about that. So its good that we balance each other out like that, he’ll know if I’m getting to monotonous, or getting to hip-hoppy with vocals. He’s always interjecting and making sure we stay musical. So I think that’s a good balance. I always feel like it has to sound perfect and he’s like nah let it go! And sometimes he’s right sometimes it is better not perfect, its good to have that balance, and we think differently so its cool.

Q: What’s the best story or thing that has happened during a show?

R: I think every night has its great elements. I think the first few nights it was nerve wracking because we didn’t play on vinyl in front of the crowd with the monitors. I think about three or four shows in we started to get very comfortable and I think that was probably the best element. Like all right yo, we got this. It sounded great on paper but you don’t know until you actually go do it. In Houston a guy had a CO2 blast and I see him with one of the guns, he doesn’t think about it, and Bill has this record with a great drop. And he shoots the CO2 blast, hits the needle, and silence… I grab the mike and say “this is why we do it live for moments like this”. Crowd screams and Bill scratches it back in. But its shit like that, good or bad, that makes it real.

B: To top it off it was about 110 degrees, and during sound check our records were literally warping. We ended up putting a tent up so the records wouldn’t warp.

Q: Last question, what music do you recommend, where should new listeners start with House?

R: Bill has a really cool house label called Moody, I have a cool label called Soulmatic. There are labels like Infected, Dirtybird, Perfect Driver, there’s a lot of DJs that are pulling out some really cool sounds, Nick Rockwell is doing some crazy stuff. There’s a lot of really good house music out there right now. I think the most interesting stuff is house music right now. The most inventive people right now are people doing house and people doing bass music, those two things.