I kicked off my Riot Fest with an impressive early set by Aussie pop-punkers Yours Truly.

This was the foursome’s first ever Chicago show. “Who came ere to fucking pahty??” they implored before playing through their April EP release, entitled Afterglow. 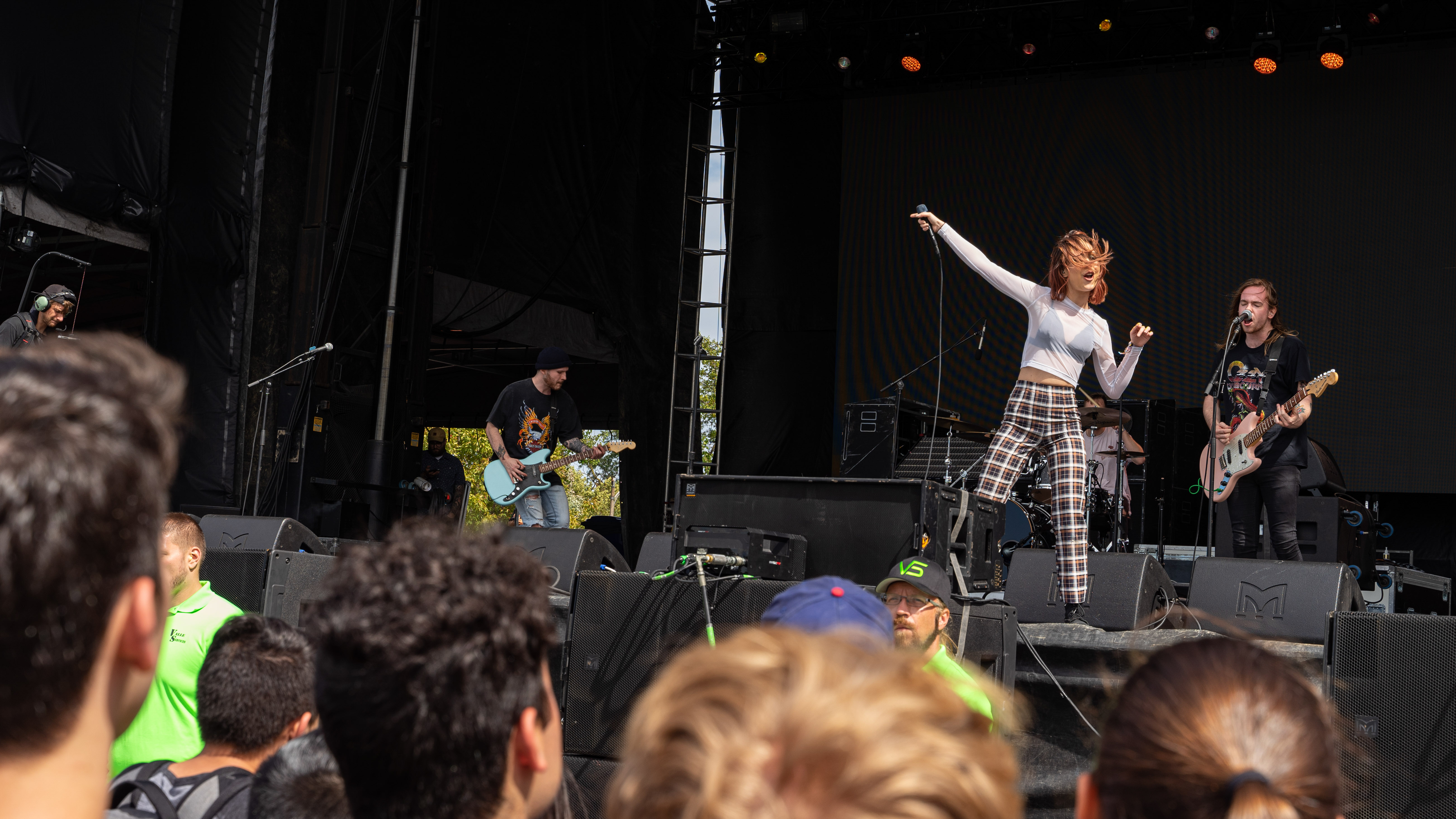 “High Hopes” and “Circles” seemed to be crowd favorites. Both songs have upbeat instrumentals and optimistic lyrics. They were super dancey and the emo crowd ate up the guitar players doing the patented Emo-Guitar-Spin-Thing as Delgado repeatedly wailed the line “we just go in circles.”

Yours Truly definitely set the bar high for an energetic first day.

I Don’t Know How But They Found Me (iDKHOW)

We shuffled over to the adjacent stage as creepy nostalgic sounding intro music, or omniscient narration rather, began to play. Think Alan Watts YouTube video meets semi-conscious animatronics from a B horror movie. After “the two cheapest bastards in Salt Lake” took the stage and the initial wave of applause faded, drummer Ryan Seaman took his seat and bassist/vocalist Dallon Weekes spake thus:

“We’re all about consent in this band… with that being said I’d like to organize a chorus singalong. So if you know the song, sing along as loud as you… feel like.”

They opened the set with their third single and most-streamed song on Spotify, “Choke”, and most of the crowd seemed to know it by heart.

A few songs later, they pulled a massive power move. A music festival bat flip if you will. These two guys covered “Debra” by Beck (a personal favorite of mine) and Weekes absolutely nailed the vocals. He laughed at the end of the song, “Thank you for letting us do that, you young ones under 27 can uncover your ears and stop thinking about church.” 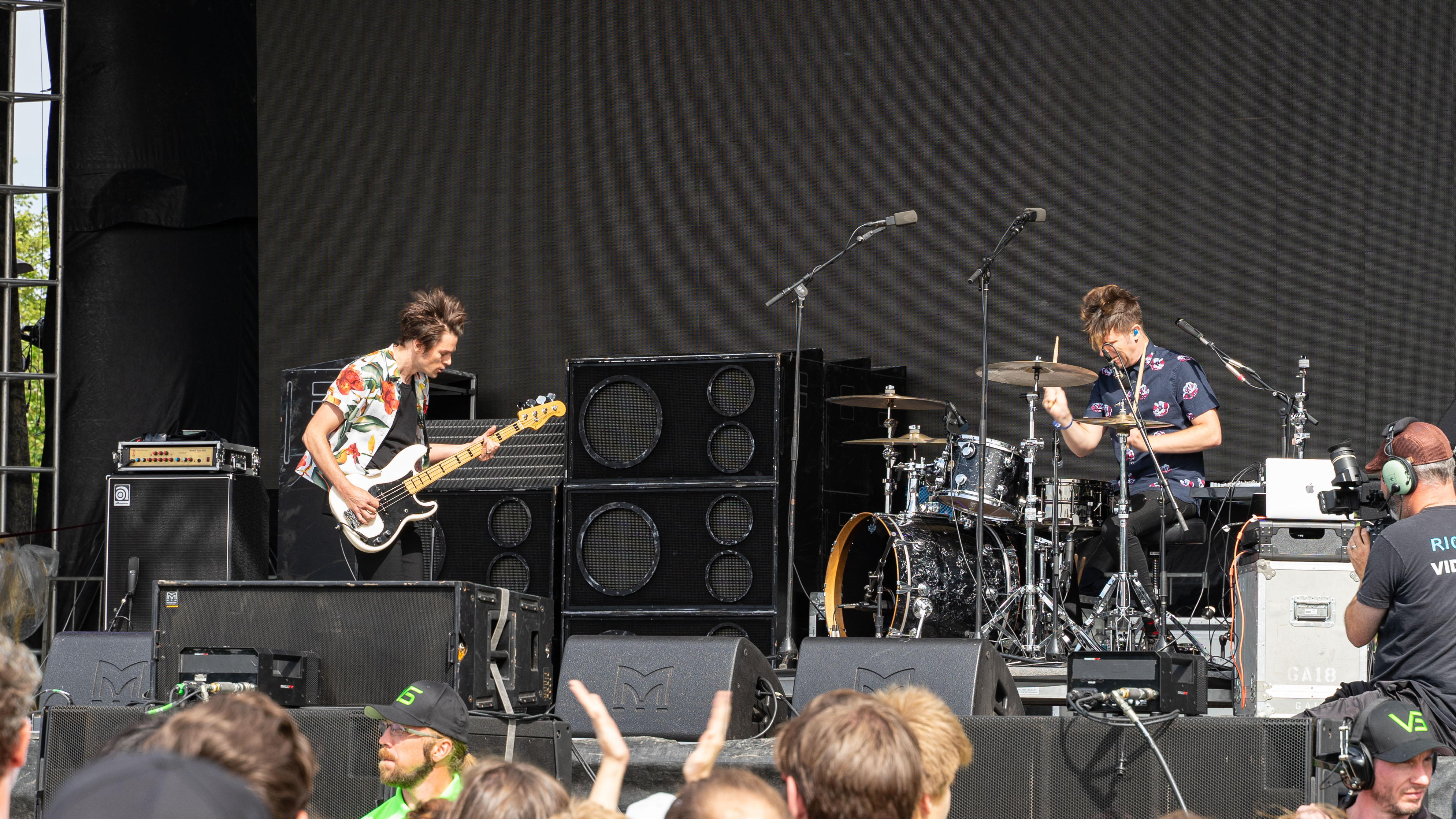 Next, they played an unreleased song that I believe was said to be entitled “Lights Go Down,” but could neither confirm nor disconfirm. The song was great. A really fun, dancey 80s synth track. Definitely keep your eyes peeled for when that one comes out!

This San Diego based group has a great, instant-classic sound that lends them respectability to the older garage and punk fans, while still being upbeat and moshy, attracting the younger kids. If I had to put them in a box, I’d call their sound post-hardcore surf punk. You indie kids think Surfers Blood or Cloud Nothings with a bit more teeth. Pair this dynamic sound with their Sub Pop label, and it’s no surprise their set was the most crowded yet. This didn’t stop guitarist John “The Swami” Reis from saying, “This is a real festival moment right now… strangle yourselves!! No seriously, everybody shut the fuck up and listen.”

With the humongous crowd almost entirely silent, the band let us sit in tense silence for a few seconds before crashing into “Six Wave Hold-Down”, their best-known tune with a definitively surfy, engine-churning vibe. The crowd went ape shit. 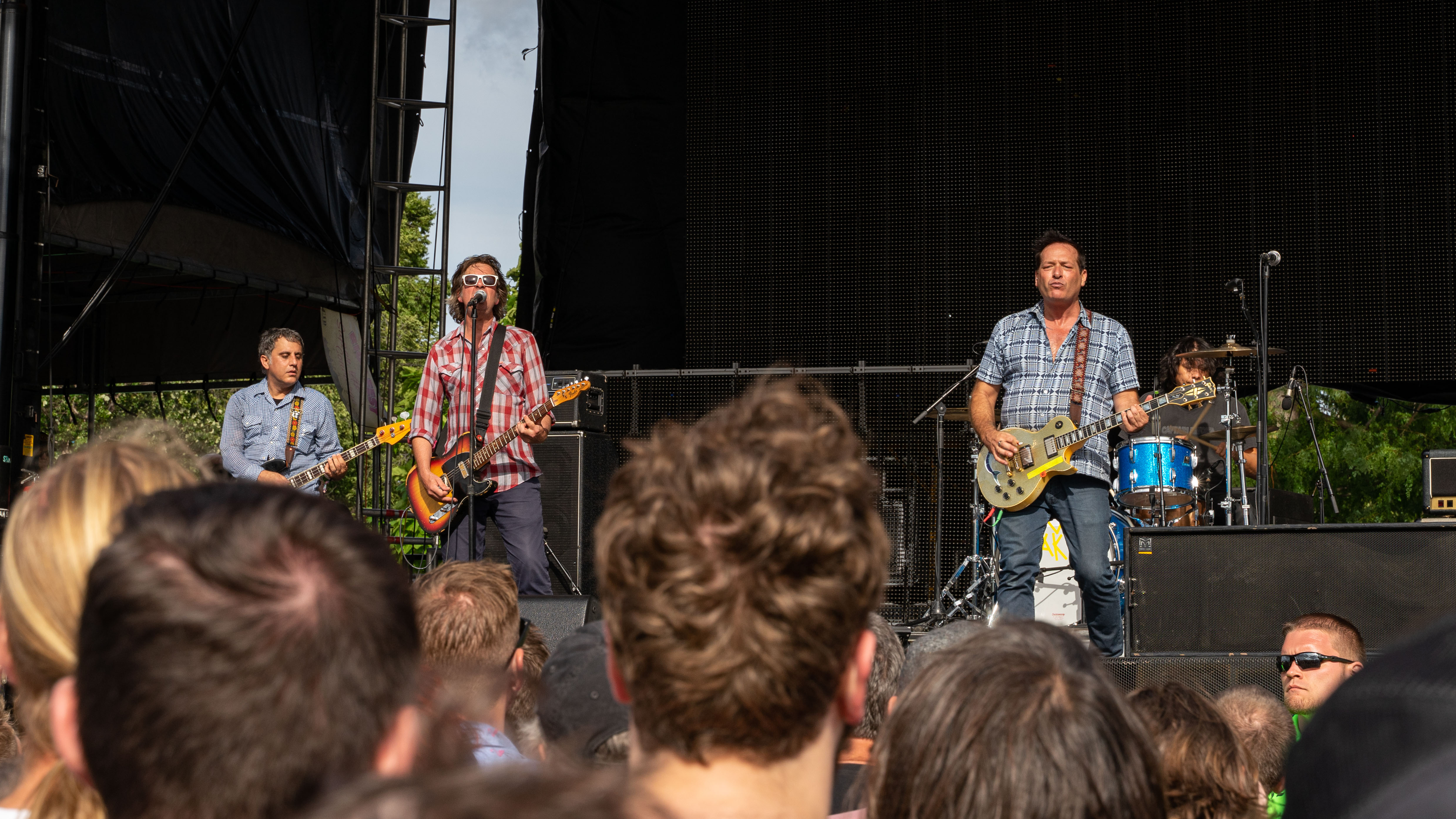 They really jammed out their songs, diving into big breakdowns for the moshers. How generous! These forty-minute sets that Riot orchestrated don’t usually lend themselves to 7+ minute jams, but these guys pulled it off! More power to them.

Neck Deep, one of the biggest British pop punk bands on the scene right now, took a break from their tour with Blink-182 and Lil Wayne and blessed Riot Fest audiences with an immaculate set. They played their late June single, “She’s a God” and it was okay. They played their Songs That Saved My Life (a Hopeless Records collaboration album for charity) cover of “Torn” by Natalie Imbruglia.

They treated me to a beautiful rendition of my favorite song of theirs, “December.” 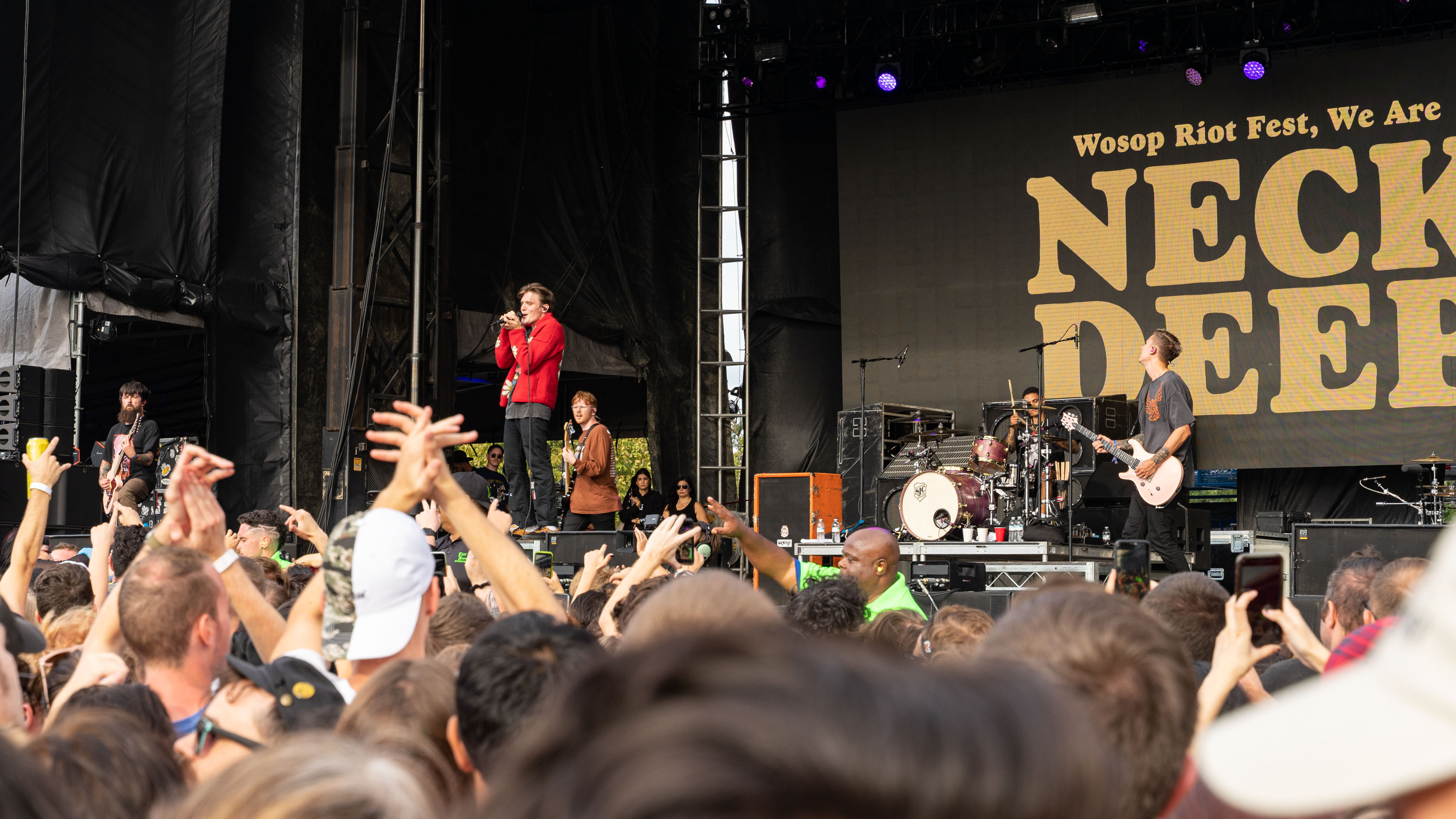 They closed their set with “Emblem” and the mad dash to secure spots at Roots Stage ensued.

Still can’t believe that I saw this with my own eyes. They’re way bigger than any band that WNUR would normally cover, but hey, I was there, and I got some cool shots so why not?

They played a full album set and played YoshimI all the way through. Their elaborate stage setup included an inflatable pink robot, a human-sized hamster ball for crowd surfing, an aurora-borealis-like laser light show, and more confetti than I’ve ever seen in one place. 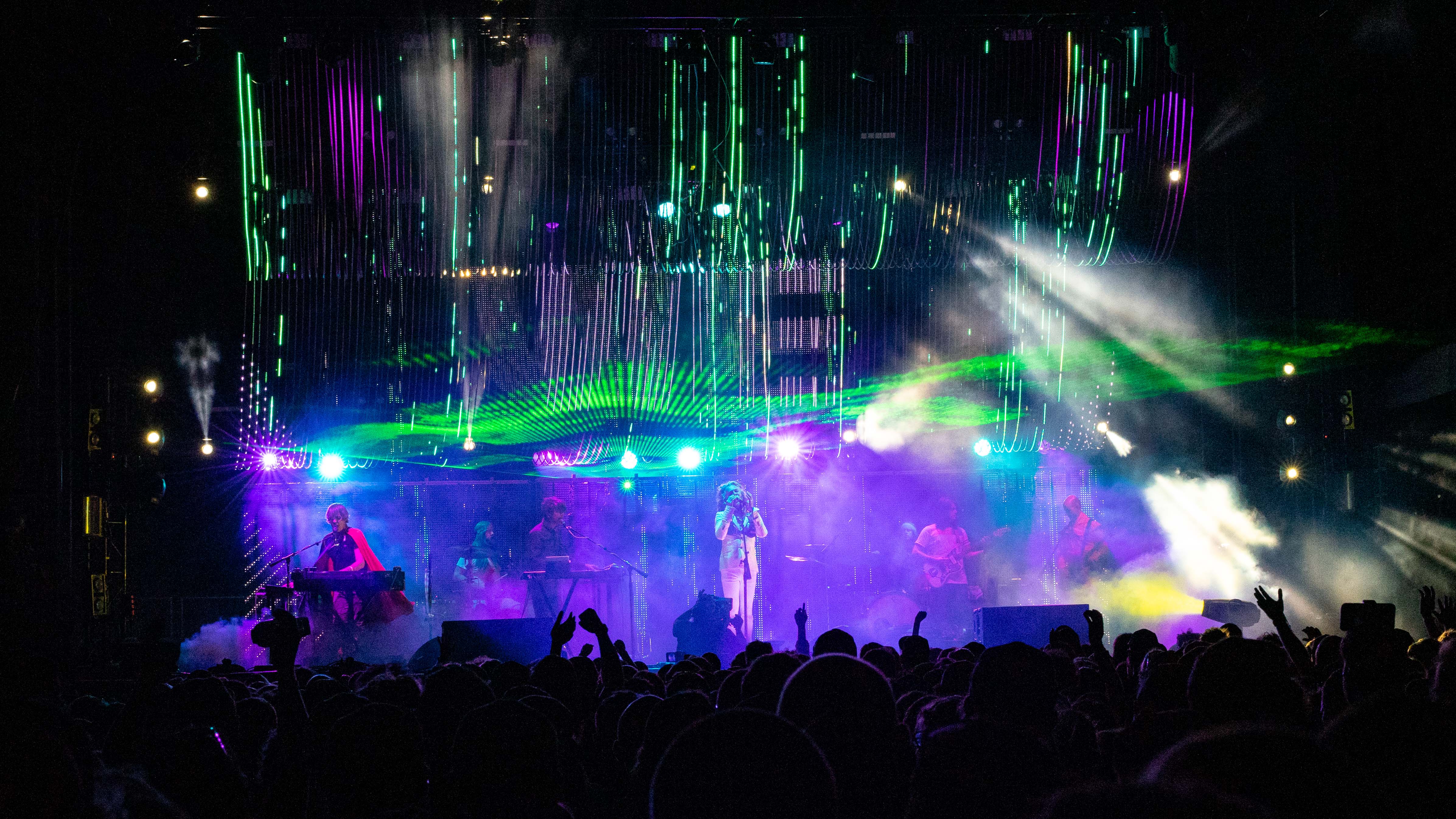 I skipped out on the Blink-182 set to catch Jawbreaker instead. It had been a long day and I couldn’t bring myself to stomach a Blink crowd. Jawbreaker played their third Riot Fest in a row, after a 20-year hiatus as a band. So now I can say I saw Jawbreaker play “Accident Prone” on Friday the 13th under a full moon, which is kind of nice I guess. Jawbreaker was one of the most influential emo/punk bands of the 90’s scene, although they were never hugely commercially successful. Critics called them “the thinking man’s Green Day.” Can’t make this stuff up. You’ll also recognize frontman Blake Schwarzenbach from his Jawbreaker successor project, Jets to Brazil. 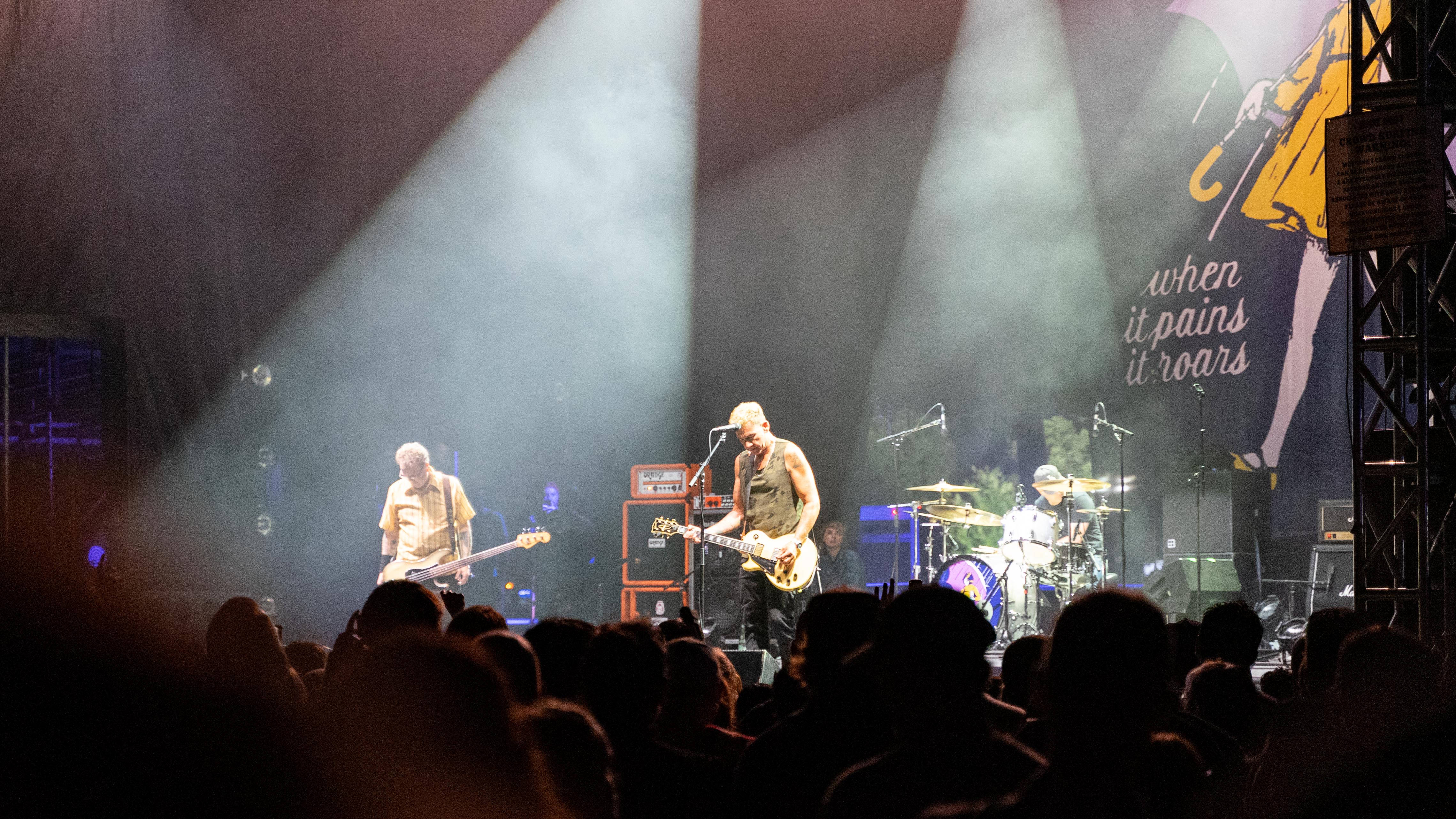 cleopatrick is a Canadian two-piece I’ve had my eyes on for a while. They toured with Highly Suspect (one of my all-time favorite bands) in 2018, so naturally they made their way into my radar. The duo’s sound is honestly just genuine hard rock. They’re like Black Pistol Fire with a little bit less Dan Auerbach and a little more Holy White Hounds.

They played an unreleased song (I didn’t catch its name) and the crowd loved it. 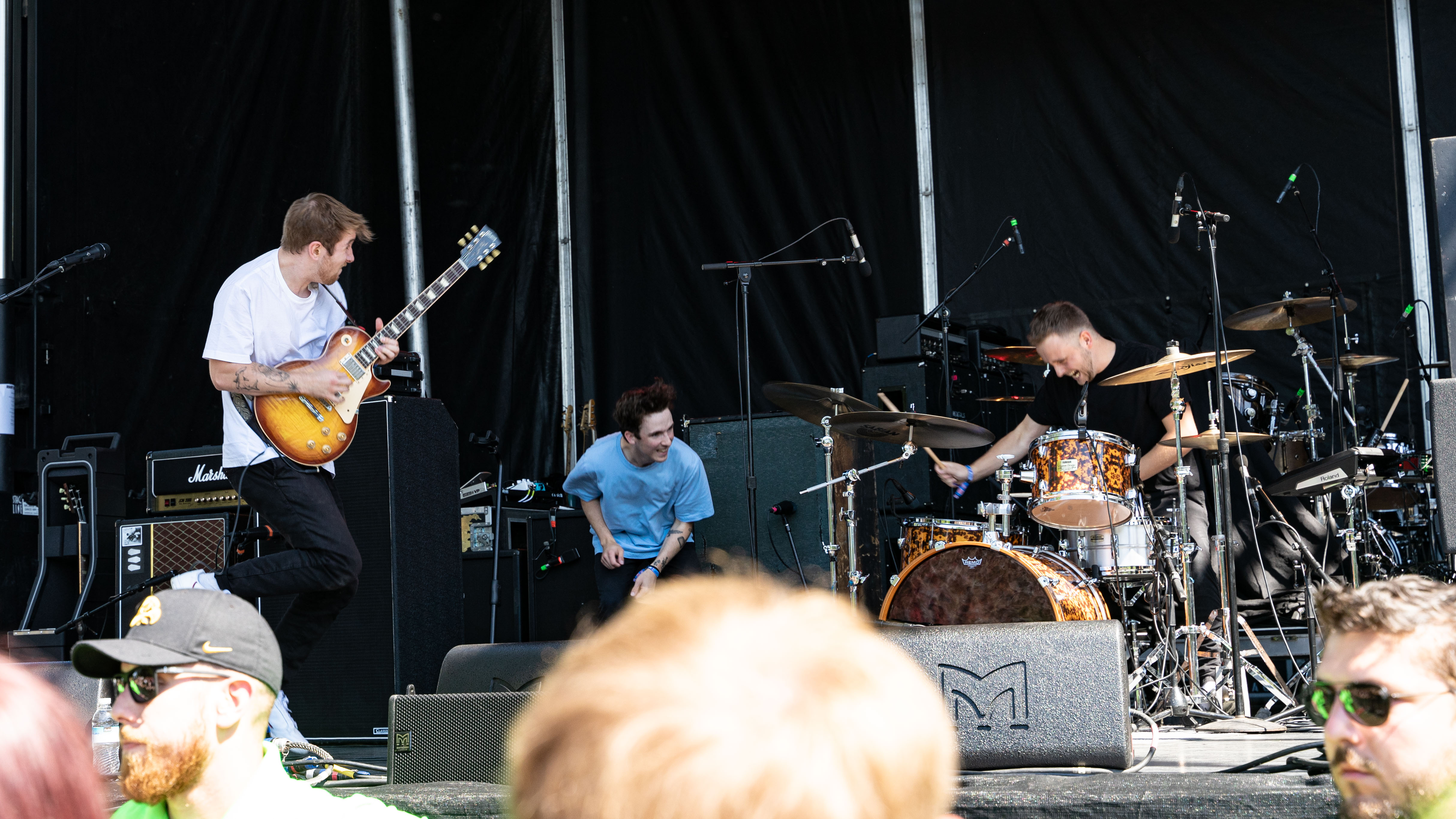 They also played their latest release, sanjake, and had their friend Sam take over the drum kit while the original drummer crowd surfed. They were hot piss and vinegar—a great way to start day two.

Turnstile is the band I was most excited to see at Riot this year. The Baltimore based hardcore punk quintet has been one of my favorite heavy bands since the release of 2016’s Nonstop Feeling. These guys threw down, diving into huge, chunky breakdowns while Brendan Yates screamed his frustration-laced lyrics over top.

This was the biggest, most energetic mosh pit I saw at the entire festival. It also marked the emergence of a disabled crowd surfer, who took to the skies with his walker in tow. I would see him do the same at three or four more sets throughout the rest of the festival. Top notch indeed.

This year’s Riot Fest was a great counterpoint to anyone who insists upon the violence of the hardcore/post-hardcore moshing scene. Sure there were some beefy biker guys in the pit, but there were also people on crutches, walkers, and yes, even some sub-90 pounders who were having just as much fun grooving out. Inclusivity!

I arrived at Surfer Blood just as they took the stage, and noticed I was part of a relatively thin crowd! Surfer Blood is a West Palm Beach, FL based indie group that’s been kicking it around since 2009. Front man John Paul Pitts was charged with domestic battery in 2012 and he pled no contest. All charges were subsequently dropped. Enough said.

That being said, they were a necessary levity to ween me off of the dark tar that is Turnstile. 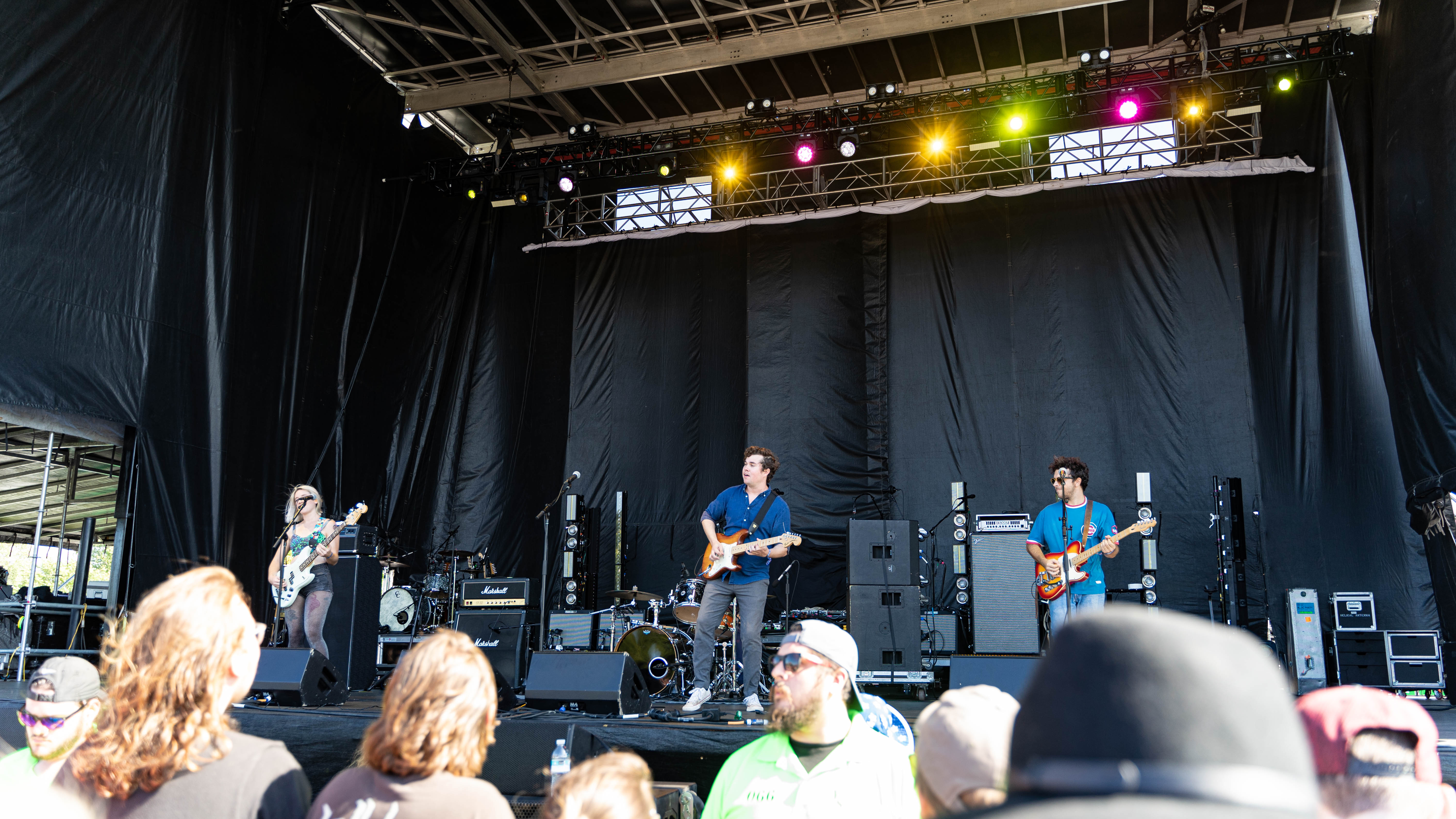 They were not as tight as I’d like them to be and some of their solos kind of sucked, for lack of a better term. Overall, a very meh set from the group. 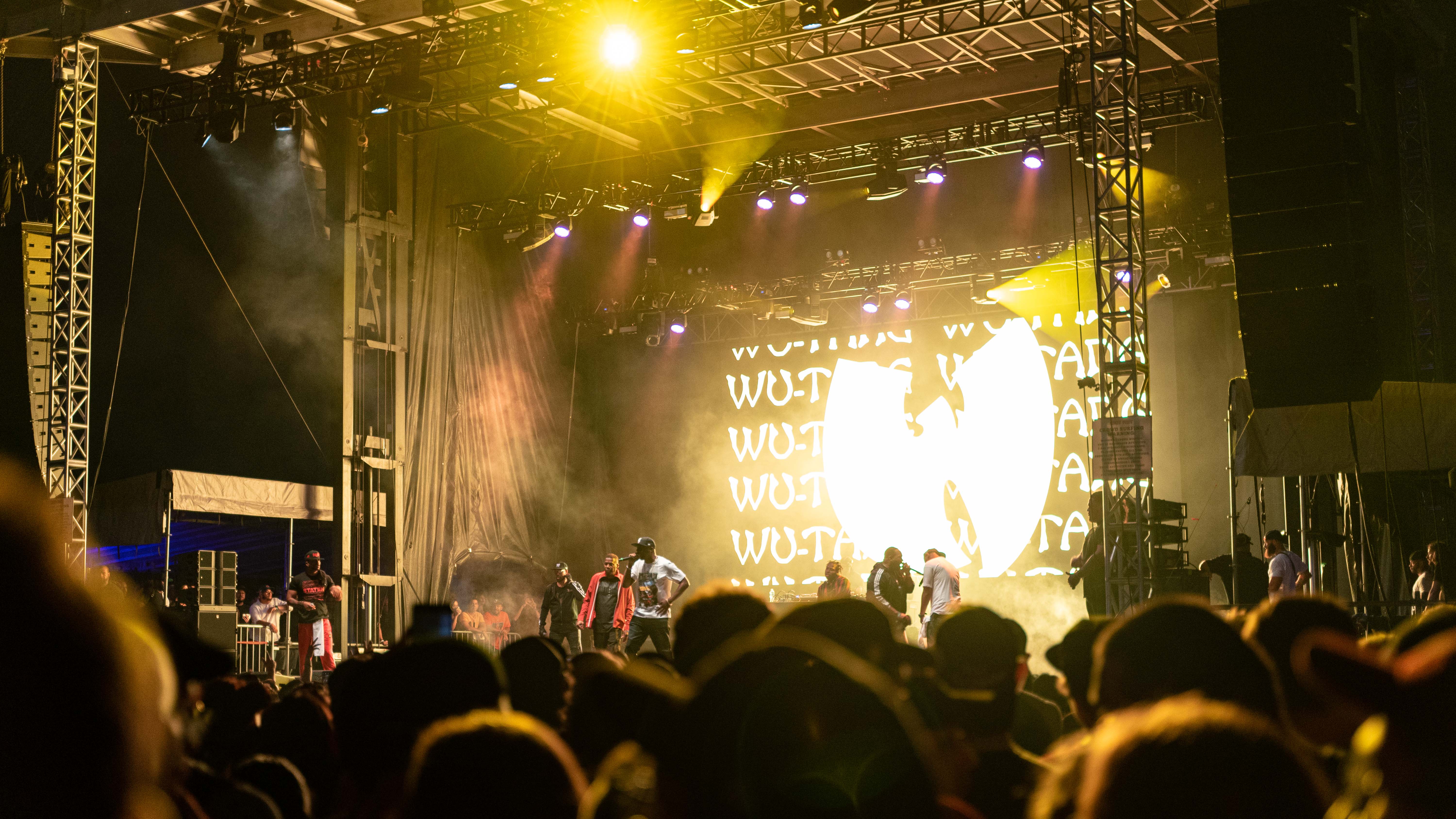 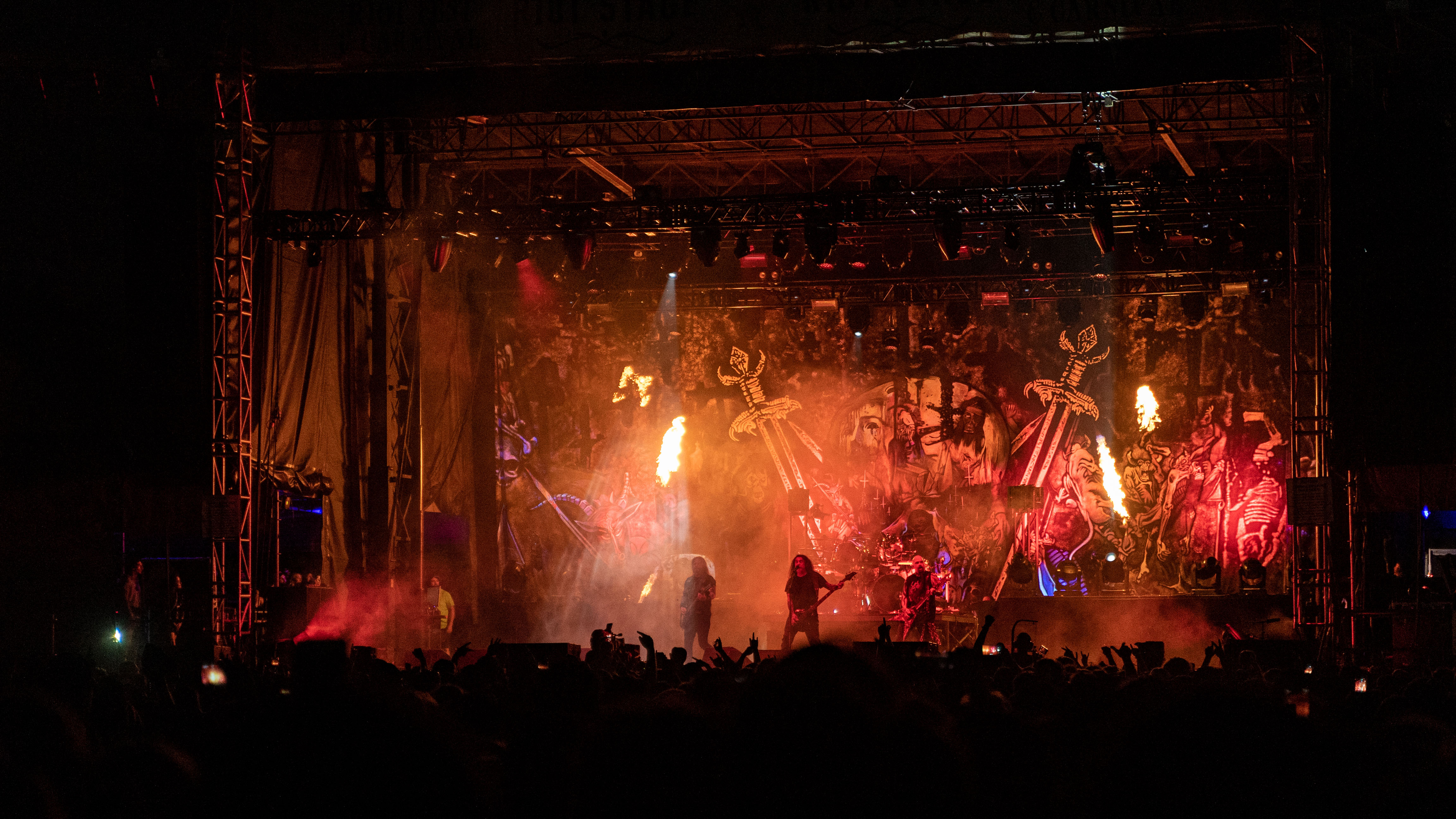 Chicago’s own post-punk foursome, Ganser, cracked it open on Sunday with a bit of a crescendo of a set. They started out tame, with their more contemplative and brooding songs, gradually getting louder, more abstract and dissonant as the set went on.

They played one unreleased track, their latest release, a single entitled, “Bad Form,” and a few tracks from their most recent album, Odd Talk. 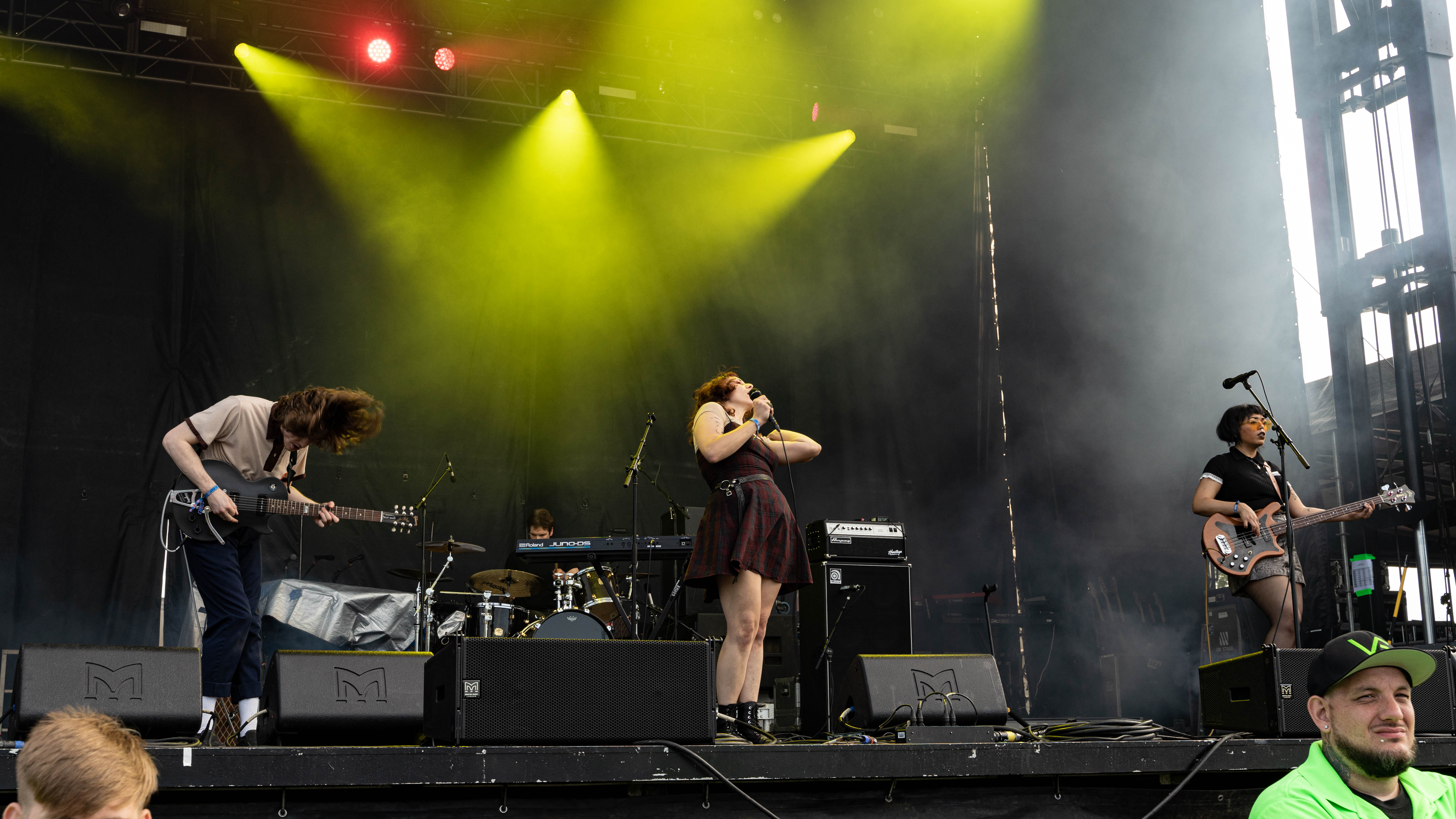 I highly recommend this band.

This OK City alt-rock band formed 10 long years ago, when frontwomen/step-sisters Kelli Mayo and Peyton Bighorse were just 9 and 14 respectively. In the past decade, the ladies tacked on a drummer and produced five studio albums, along with a handful of EP releases and a dozen singles.

They played an energetic set, which included their newest single, “Flyer.” It was very good. They effortlessly blended heavy, lashing guitar riffs with high pitched, girlish vocals, all while flying around stage in cowboy boots in Peyton’s case. 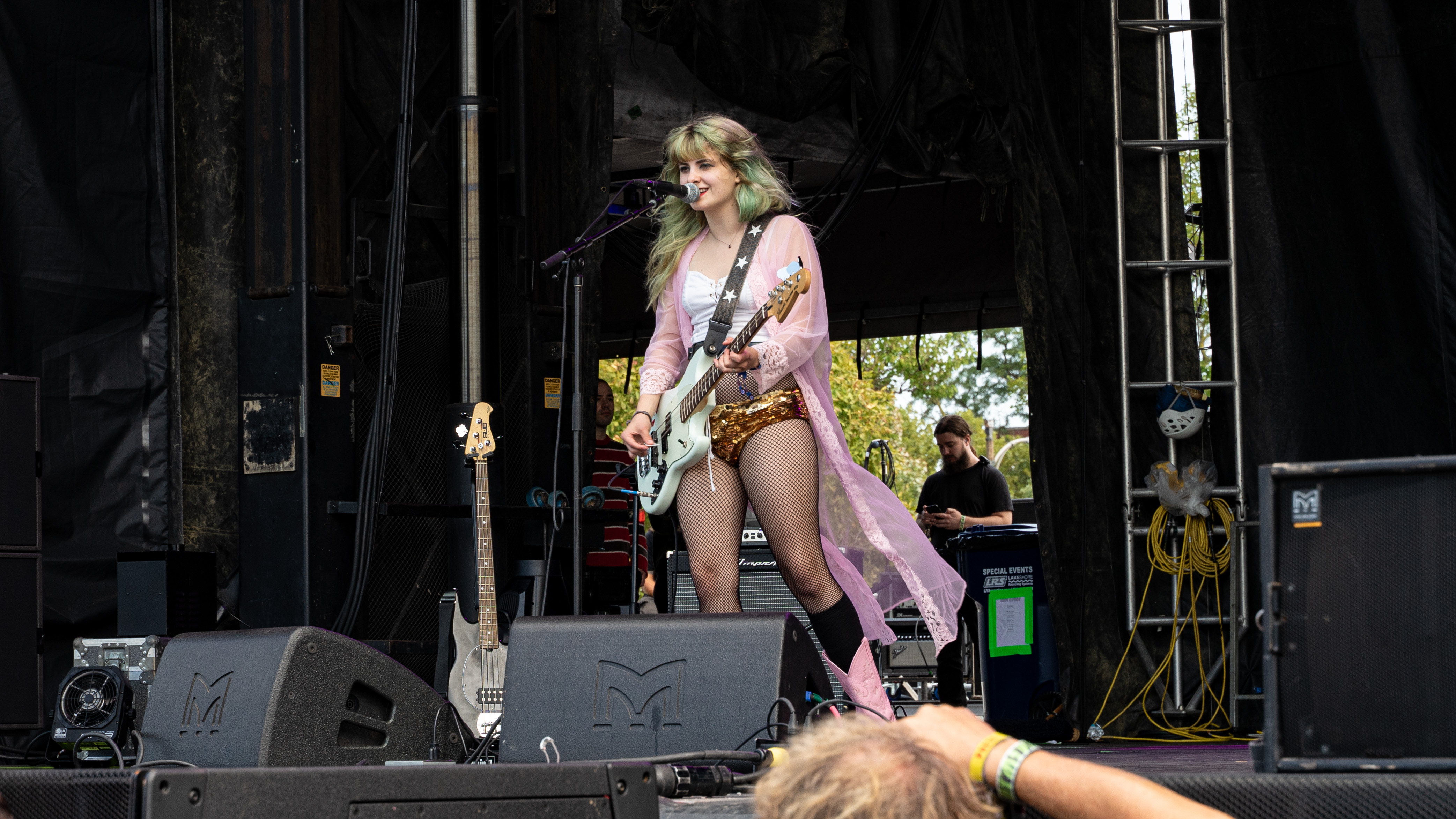 These gals are great for anyone looking for upbeat, dancey rock or anyone who just likes that 2000’s female-fronted sound. 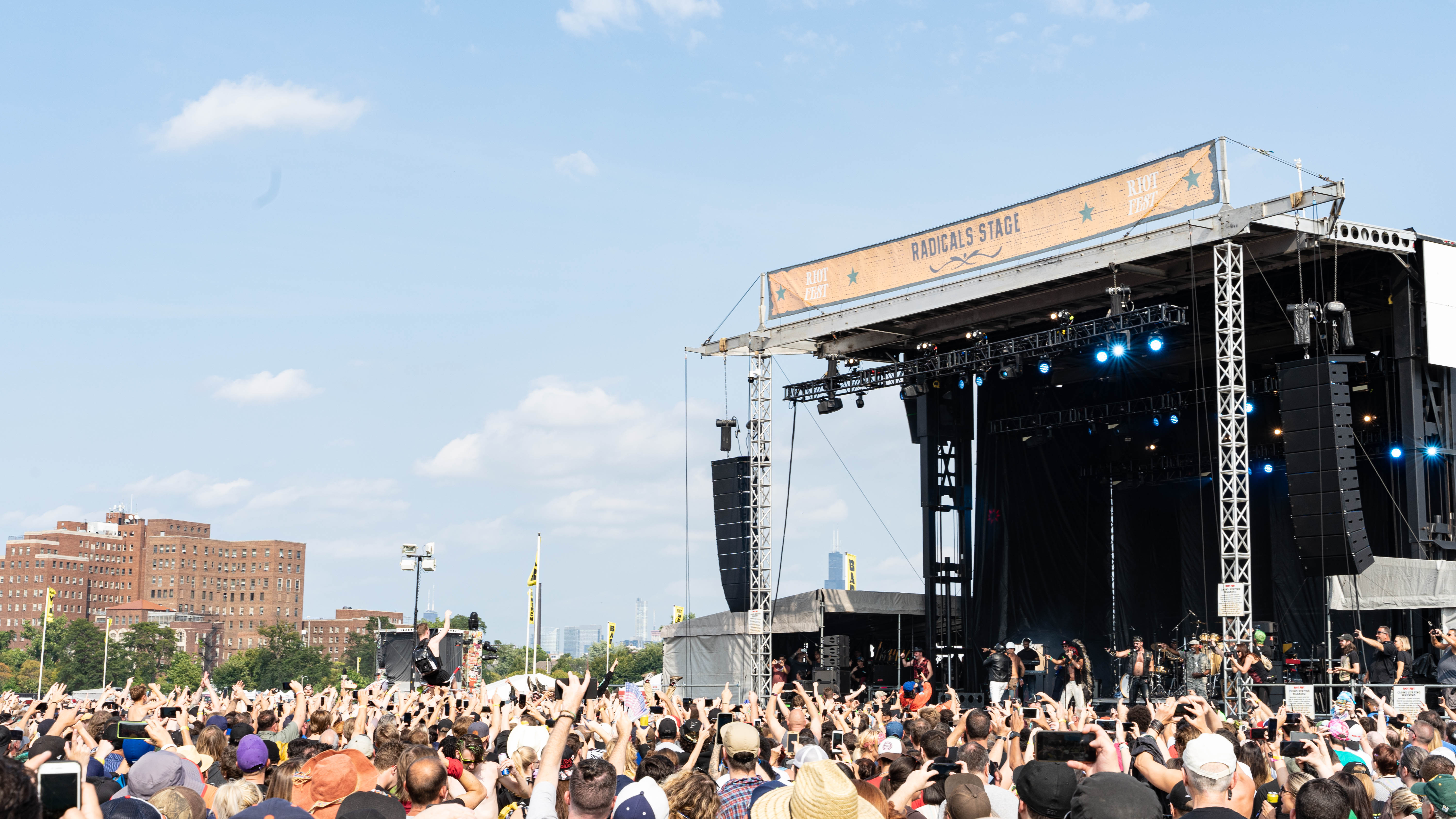 My dad’s all-time favorite band. This Dayton, OH based alt band has been around since ’83 and has experienced multiple personnel changes and over 28 studio albums. Prolific. They’re also known for playing marathon sets of 40-60 songs. The band is currently in its second reunion period.

Their sound is a blend of garage, psych, prog punk, and post-punk and I would argue that they’re what 70-85% of shoegazey, surfy sounding garage bands are trying to emulate. 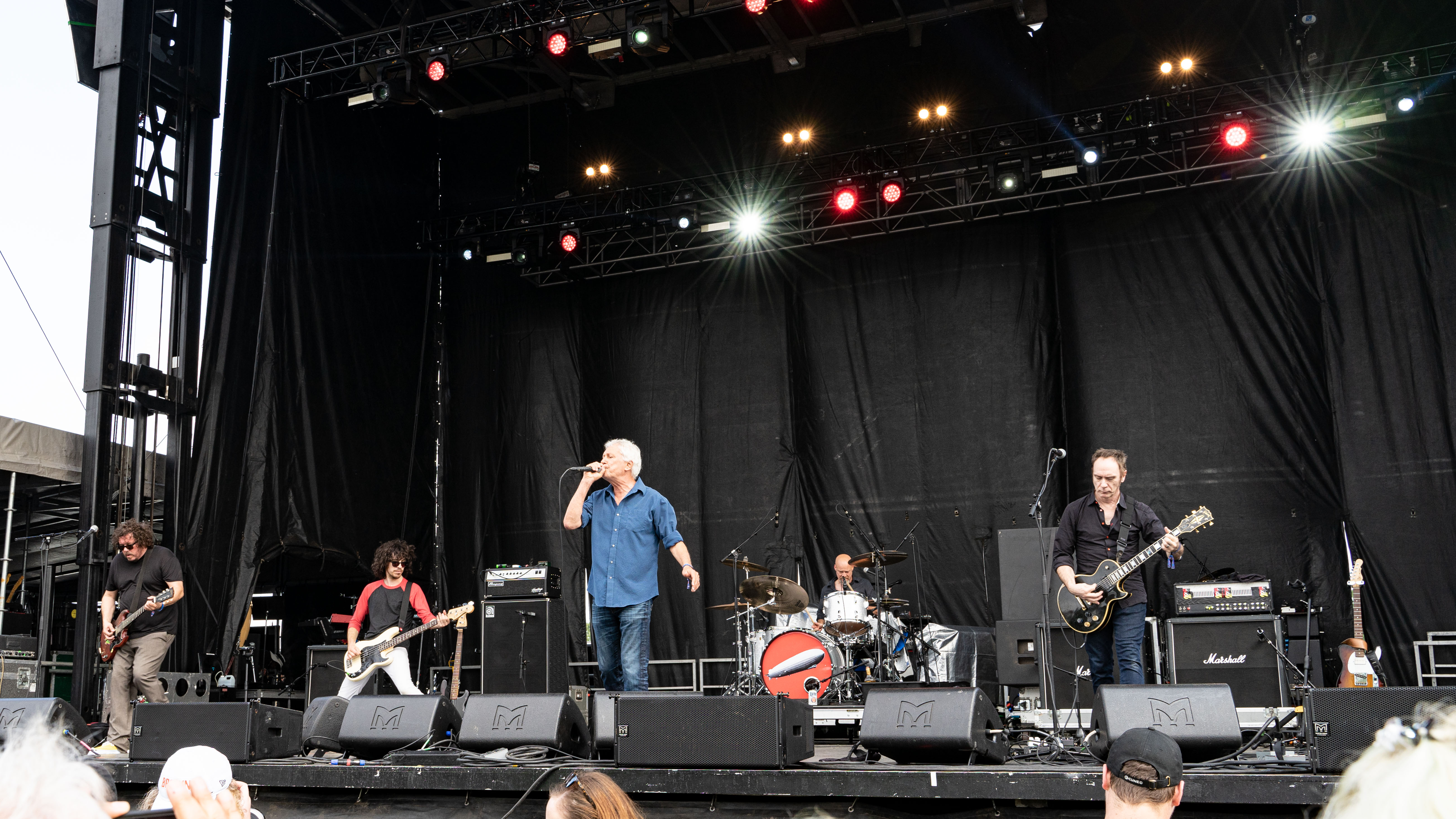 They were great. If you somehow haven’t heard them yet, go check them out now.

“Rock Lobster” happened and I moshed to it.

Played a two-hour set, and hit The Mollusk along with some other hits.