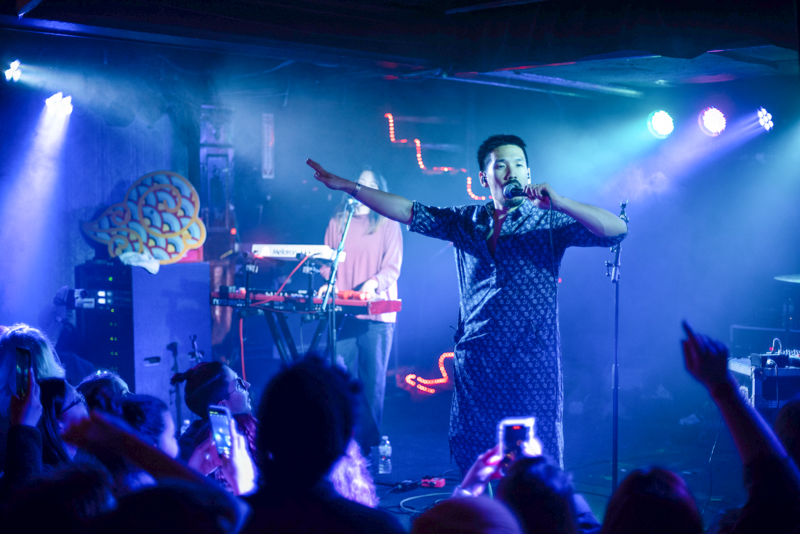 Opening Run River North’s first headlining tour lonely weather, favorite sweater, was New Dialogue. A small indie rock band also from California, they managed to churn out a multitude of very high energy songs within 30 short minutes. Although the songs themselves were nothing out of the box, they brought a lot of power to the venue, dancing in front of coordinated pulsing lights and giving 100% to their music.

Standing in the second row of the audience between sets, the crowd murmured with their excitement for Run River North. My first impression was the lead singer, Alex Hwang, handing out not nearly enough paper yellow pamphlets into the crowd. Folded like a brochure and designed like a church Mass program, the paper had a set list, member biographies, and even some lyric snippets from their bigger songs. This introduction led to a unique set unlike any I had ever experienced before.

Their setlist comprised of a great mix of their slower and more acoustic songs like “Lying Beast” or “Rearview,” which utilized Sally’s unique thin voice, to much brighter (and louder) pop and rock vibes with Alex jamming out on the guitar or crowd surfing in a dress.

Not only did they perform every song with energy, Run River North also took time to interact heavily with the audience, from bringing up a random audience member on stage to make coffee, opening up a pit for Alex in the middle of the floor, and leading multi harmonic singalongs. Feeling like not only part of an adoring crowd, but also connected closely to the musicians, made the concert that much more engaging.

Their music is wholesome and accessible with relatable lyrics like “it’s only lonely weather, it melts with the ice… just give it some time” from the unreleased tour title song, “Lonely Weather.” However, they manage to put a unique twist on each song through mixing their very different three vocals and introducing new instruments such as Daniel’s violin solo on “Monsters Calling Home.”

Run River North brings something to the ear for everyone, and their live concert enhances their individual and their music’s personalities. They are optimistic, genuine, sensitive, and filled with passion, and I look forward to hearing more of their music in the future.