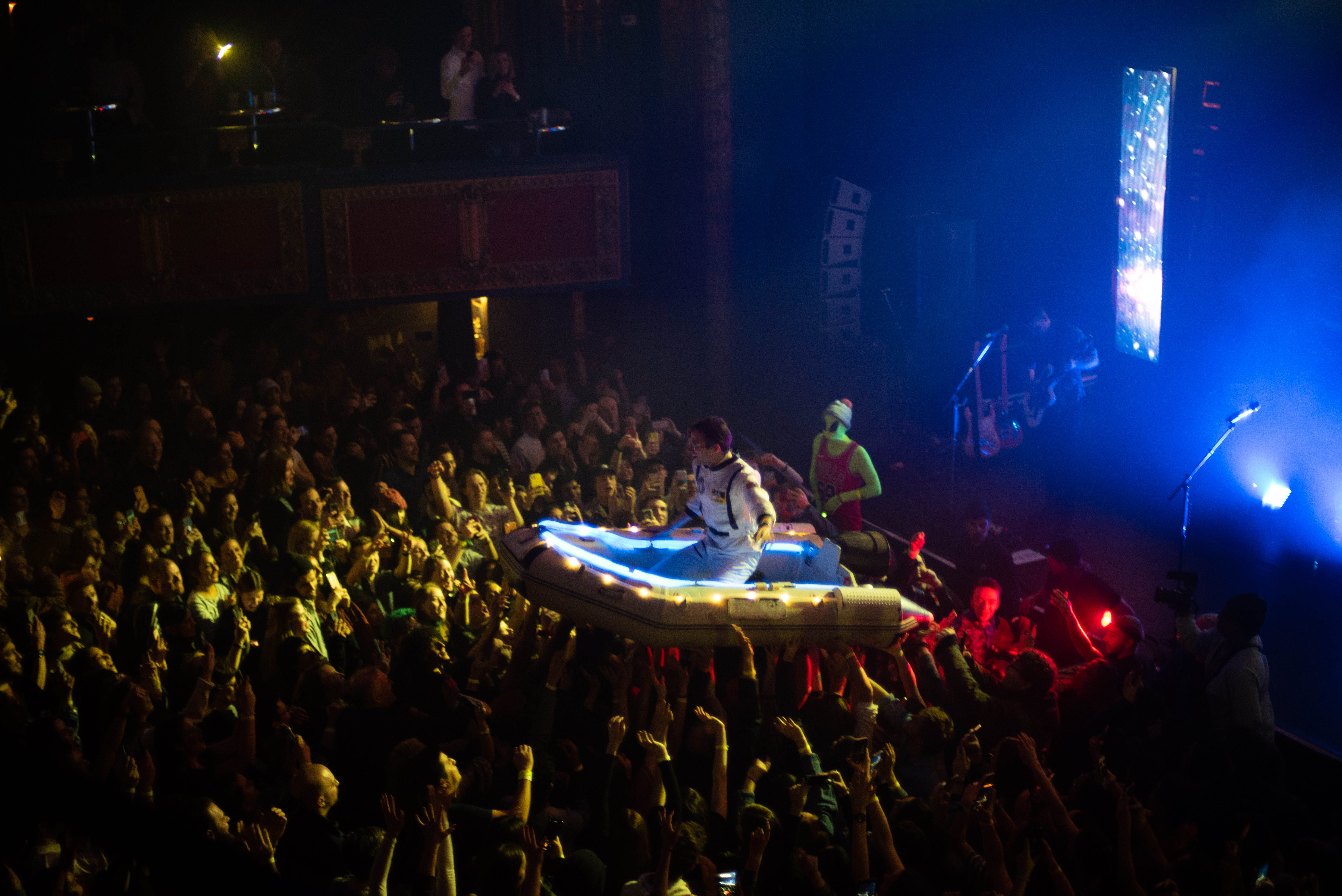 I started listening to Saint Motel when I was only 14 years old, after the release of the My Type EP. My dad and I would listen in the car together on the way to soccer games and school events until eventually we were both obsessed. I saw them for the first time at Gov Ball in June 2017, but I still did not understand what it meant to be at a Saint Motel show until I went to their own show in November of that same year. My dad was so jealous that I had seen them without him that he bought us tickets to go together on the night that my Early Decision application for college was due; I applied to Northwestern, and then went off to Brooklyn to see Saint Motel and celebrate. It felt like a very full circle moment for me to be able to see them as a Northwestern student, and to write about it for a Northwestern radio station. A Saint Motel show isn’t just a concert, it’s an immersive experience featuring TV and movie clips, props, and copious costume changes. They tell a story with their shows just as they tell a story with their music. This time, the story began with Kolars.

Kolars, the glam rock/grunge/indie duo — composed of married couple Rob and Lauren Kolars — took the stage in matching silver sequins and eyeliner. Lauren began the set with reverberating drum beats, and it soon became evident that not only was she drumming, but she was tap dancing at the same time. Lauren was completely in her own world, moving her mouth as if she were biting something and flipping her hair to the rhythm of her own beats. At one point, the girl standing next to me yelled to her friend “I just wanna be her! She’s so cool!” While Lauren drummed and tap danced, Rob sang and played the electric guitar. With a raspy voice, hypnotic melodies, and high energy, the entire crowd was soon jamming. A set highlight was the third song they played, “Touch the Lightning,” in which Rob crowd surfed while playing a guitar solo. Another hit was the high energy “Here Comes the Night,” where they got the entire audience to participate in a call and response. I was very impressed with their set and am excited to listen to them more; they’re coming back to Chicago this year for their own show so be sure to keep a look out for that!

Saint Motel split their set into 4 parts: Everest, Military March, Space, and Band Biopic. The aptly named “Motion Picture Show” began with a voice narrating a man climbing Mt. Everest, and seemingly dying, while videos of Everest were projected on the many onstage screens. As the narrator said: “But wait — could it be? He’s alive!” frontman AJ Jackson ascended from the barricade wearing a winter jacket and carrying a lantern, immediately launching into the fitting “Cold, Cold, Man.” In the Everest section, they oscillated between playing old hits like “For Elise” and “Sweet Talk” and songs from The Original Motion Picture Soundtrack: Part 1 like “Diane Mozart” and “Sisters.” The Original Motion Picture Soundtrack: Part 1 is the first part of a soon to be three-part album, which will hopefully be released over the next few months. As they were playing, images of snow and nature were projected on the screens behind them. A highlight of the Everest set was definitely “Sweet Talk”; the audience was really into the call and response and could not stop dancing.

After Everest, Saint Motel transitioned into Military March, where they returned to some of their older hits. After a brief narrator monologue about revolution, AJ reentered the stage to their 2009 song “Dear Dictator” — dressed up as an evil dictator compete with a flaming torch. They then launched into Destroyer, which included a phenomenal saxophone solo. During the next song, “Puzzle Pieces,” there was another fantastic instrumental solo, this time on trumpet. The impeccable instrumental performances throughout the night are part of what make Saint Motel so special.

In the Space portion of the set, AJ donned a full-on space suit and crowd surfed on a giant inflatable spaceship. He then slowed down the set with newer songs “Old Soul” and “Save Me,” which really showcased his talent and vocal range. He brought out KOLARS for a cover of “Chicago” by Sufjan Stevens, and then took the time to thank every single member of the crew by name and asked the crowd to buy them shots. They ended their main set with “Born Again,” as AJ held out a seemingly impossibly long and high note while standing on the barricade and grabbing audience members’ hands.

Their encore, Band Biopic, featured an overview of the creation of Saint Motel: the four original members skipping class to rehearse their music. They sang one of their first songs, “Butch,” along with new song “Van Horn” and the absurdly catchy “My Type.” When the show ended, I just wanted to keep singing and dancing. I felt like I had been taken on the rollercoaster ride of my life. Saint Motel has always been one of my favorite bands, and their performances make me love them infinitely more. Their charisma, energy, and sheer talent is truly unparalleled, and they get better and better every time I see them. I could never get sick of going to their shows.