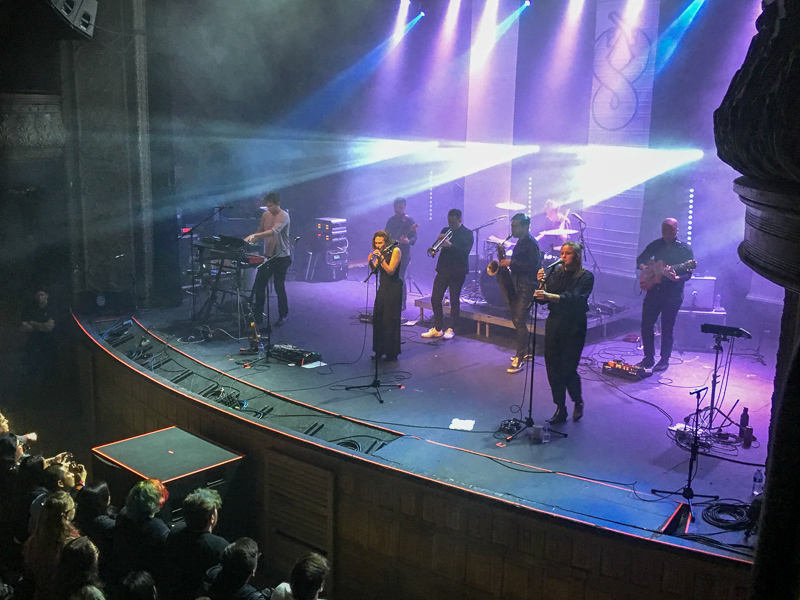 Three hours before the headliners walked onstage, fans had begun to line up in front of the doors of Thalia Hall. Once inside, they were greeted by a crowd of people packed in front of the dimly lit stage; one could just make out the band’s title on the bass drum through the smoky haze. Anticipation filled the air; the mostly middle-aged crowd was eager to hear from San Fermin, the Brooklyn-based indie rock collective.

But first, the band Bad Bad Hats opened the show to a loud smattering of cheers from the crowd. Hailing from Minneapolis, Minnesota, lead singer Kerry Alexander graciously accepted the welcome, noting this was over the tenth show they had performed in Chicago. The group raced rapidly through their five song setlist that included jaunty hits like “Midway” and “Psychic Reader.”

Soon after, the lights dimmed, and San Fermin took the stage. A large portion of their 19 song set list came from the group’s latest album, The Cormorant I. Released only a few weeks ago on October 4, the album capitalized on minimalism, combining simplistic accompaniments that created a serene and enchanting performance. The blending of vocalists Claire Wellin, Karlie Bruce and Allen Tate’s voices in “Summer by the Void” and “The Living” created a beautiful, mesmerizing performance that captivated the crowd. Seven out of the eight tracks on the album were performed, save for “Hickman Creek,” a 54 second instrumental.

Of course, a title like The Cormorant I implies the prospect of a sequel, a topic that the group addressed. Wellin hinted at the release of another album at some point in the near future, advising the crowd to “pay attention and keep checking Spotify.” The band proceeded to perform two songs from the unreleased album: “Swamp Song” and “Rescuers,” both of whose melodies had similarities to songs in The Cormorant I.

The members of San Fermin were visibly comfortable and unafraid of mixing things up. On the soft and melodious “Cerulean Gardens,” keyboardist Ellis Ludwig-Leone decided to switch instruments with drummer Michael Hanf, while saxophonist Stephen Chen and trumpeter John Brando leaped off the stage during the energetic hit “Sonsick” to perform solos in the crowd. Each member of the group got their own time to shine; a majority of the songs featured solos from an assortment of different instruments, from the doleful sound of violin in “Parasites” to a brash, fevered drum solo to finish out “Swamp Song.”

At first glance, it might have appeared that the crowd was not quite into the performance. Throughout the night, many members of the audience bobbed their heads along to the songs while the rest watched motionless. There wasn’t any frenzied dancing, yelling along to the lyrics or anything of that manner. But that’s not why the crowd showed up an hour before the doors even opened, three hours before the band even got on stage. The audience wanted to appreciate some truly enchanting music, and San Fermin gave them the exact kind of show they were hoping for.