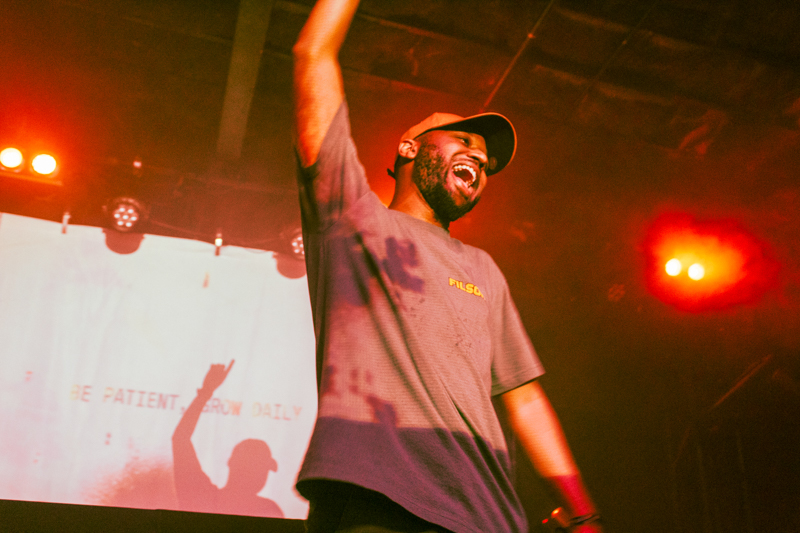 In a monstrous two-hour DJ set, Seattle-born, Grand Rapids-raised producer Sango managed to not overstay his welcome. This should tell you all you need to know, but feel free to keep reading. While Sango has not made an enormous solo name for himself, his career is clearly in the takeoff phase. 2019 was kind to him, as he secured writing credits on Frank Ocean’s “In My Room,” the most popular song he has worked on to date. Tuesday night, he brought two members of his Grand Rapids music collective AGO, Waldo and Savon, along with him to Chicago to continue his Quiet Storm Sessions tour.

The Bottom Lounge is a strange place to be when empty and fully lit. Thirty minutes before doors opened, the notoriously rowdy venue felt naked. In due time, though, people began to file in, returning the venue to its glory. Visuals of Baby Yoda chilling played on the projector as the in-house DJ shuffled through a mostly Tierra Whack playlist.

Waldo took the stage and emphasized bars and beginnings. Waldo paid tribute to his adolescence through background visuals — the projector behind him displayed grainy shots of the Big House and the historic Crisler Arena as well as footage of Michigan highway exits and even a quick callback to what looked like Windows 2000. While Sango and Savon, who was in the DJ booth behind him, receive a lot of credit for their production on Waldo’s songs, Waldo showed the Bottom Lounge crowd that his lyrical abilities were not to be trifled with, leaving the crowd gasping for air with barrages of bars. One has to look no further than his lyrical content to see how Waldo has matured as an artist over time. While old projects like 2013’s NSDE/OUTSDE had a few groaners: “I’m Waldo / So it took some time for y’all to find me / Now these labels want to sign me,” (Purple Heart), the tracks he played from 2019’s Grove showed a more focused, hungry Waldo, such as the absolute ether line “From Grand Rapids to the Grand Canyon / I make a difference, it don’t matter where the man standing / A Black life matter only to a Black Panther,” (No Stress). He capped his set off as fired up as when he started with the bass-heavy “Ashes 2 Ashes,” priming the crowd for the heat Sango was about to unleash on the Bottom Lounge.

Fellow AGO crewmate Savon had a brief DJ set before the man of the hour took the stage. His production style was a bit scattered, ranging from deep house funk grooves to more high-speed chaise lounge beats packed with staticky synths. His love for Drake’s OVO collective shone through, as he played “Passionfruit” and PARTYNEXTDOOR’s “Break from Toronto.” With Toronto located just a five-hour drive from Grand Rapids, one can imagine that the Toronto music scene had a strong influence on a young Savon. Much like Sango, Savon knew his Chicago audience well; the crowd sang the whole chorus to his pitched-up version of Common’s “The Light,” and his transition of the “F.U.N.” song from SpongeBob into “Faneto” by Chief Keef was far and away the most hype part of his set. While his set seemed to go on a bit long, he segued nicely into fellow producer Sango.

It is hard to realize just how extensive Sango’s discography is until one hears him live. As lights of every color oscillated around the stage, he seemingly took the crowd from New York City to Brazilian nightclubs to New Orleans streets all in one evening. All of this is to say, his set was all over the place. Rocking a Detroit Tigers baseball cap even in light of their 47-114 season in 2019, he began the night with his sugary Smino collaboration “Khlorine.” He then took the crowd through his Brazilian funk albums, sultry tracks from his joint album with Xavier Omär, and the first verse of Bas’s “Boca Raton,” which samples his song “Para a Luz.”

Sango made sure to weave in some indisputable hits into a set that largely chronicled his production accomplishments over the past decade. Tracks such as “International Players Anthem” and kick-drum-heavy New Orleans bounce classic, “Get the Gat” were met with high enthusiasm. He even brought out the whole AGO crew to go crazy and jump around the stage with him on Future’s “March Madness.” Perhaps this song carries special significance for the crew, as Future’s line “switching lanes into Grand Rapids,” gives the city some representation that they rarely find in rap music.

Although Sango has already finished several of his own projects, in English and Portuguese alike, he clearly has more in the works. During one track, he casually mentioned that the audience was listening to “unreleased Smino right here, produced by Sango.”

Continuing the theme of paying homage to Chicago, Sango brought out a special guest toward the end of his set. Chicago rapper and Zero Fatigue signee Jay2 came out from backstage to perform a few songs over some quintessential metallic Monte Booker beats.

After everything Sango took the Bottom Lounge crew through on Tuesday, the simple affirmation that flashed along the background screen stuck with me the most. The screen read “Be Patient, Grow Daily,” and seems to be Sango’s mantra, or at minimum a clever tagline for merchandise. I’d like to think that deep down, Sango wants us all to slow down in the hectic instant gratification-focused world we live in and take some time to focus on self-improvement. The message didn’t manifest itself in the high-octane Bottom Lounge that evening, but it likely gave more than one audience member something to ponder afterward.