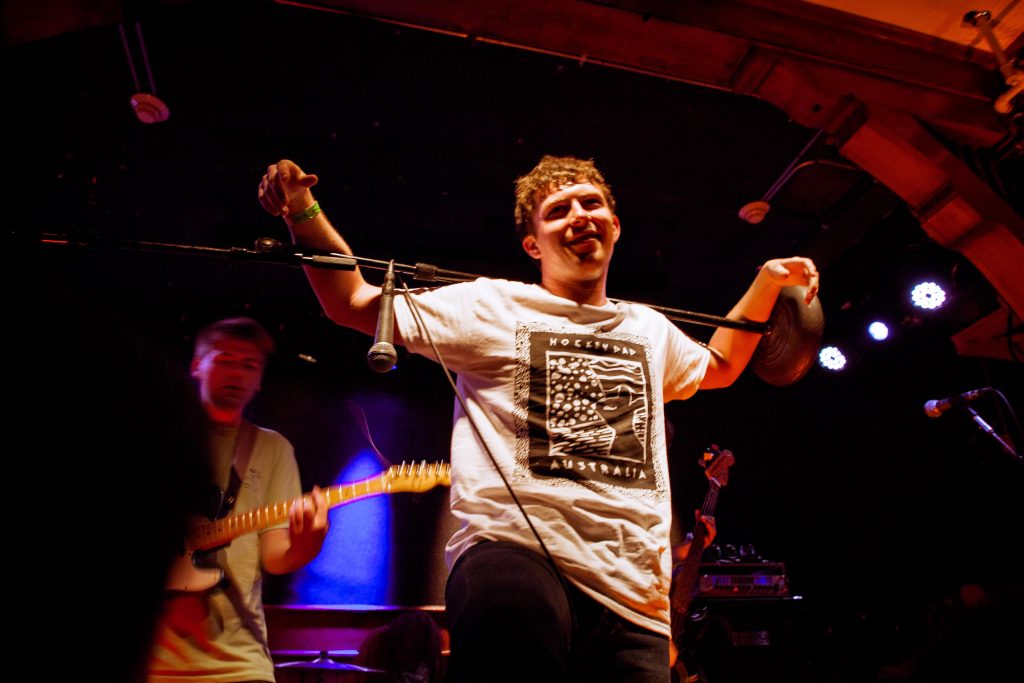 Schubas Tavern on a cold Thursday night became the perfect site for Shame’s Chicago stop on their latest USA tour. Schubas Tavern was giving off a distinctly church-hall atmosphere, with a few colored lights projected above the drum set and red lights illuminating the band. The intricate carved wooden arch, which framed the small stage, completed the venue’s transformation from iconic back-of-a-bar stage to post-punk church. Shame is a five-piece South London indie-rock band made up of: Eddie Green, Charlie Forbes, Josh Finerty, Sean Coyle-Smith and Charlie Steen. The band members are barely out of their teens, but have toured the US multiple times, and come to this show fresh from a set of Australian festival dates. At Schubas Tavern Shame treated us to new album, which takes the name of British Sunday morning staple Songs of Praise. However, instead of choir boys singing heavenly hymns, we were faced with the angsty post-punk of five lad’s lamenting the current state of British society.

The congregation consisted mainly of an older crowd with glasses and beards in tow, but there were also a few younger members of the flock. Warmed up by openers The Gotobeds, Pittsburgh indie-rockers, the crowd was ready to do some serious head-nodding. By the time Shame made their way to the stage the house was full. Responding to a crowd member’s half-hearted cheer, Shame gave a few joking screams of their own, marking the start of the band’s attempt to bring the crowd out of their comfort zone.

The preacher was front man Charlie Steen, who took to the stage, cowboy hat in tow, to ramp up the applause. Shame started the sermon with the first song from their album Dust on Trail, a chord heavy opener with Steen singing in a low monotone, inviting the crowd to “walk with me,” before rising to a more hoarse shouting and climaxing with a guitar solo. The crowd dutifully nodded along.

The second hymn of the evening was “Concerte,” featuring shame’s characteristically catchy guitar riffs. With Steen removing the cowboy hat and reaching forward to the crowd, lightly patting their heads, blessing them in turn. Steen and bassist Josh Finerty started their signature call and response vocal lines, adding a depth and variety to the their performance. With their hit single “One Rizla” we were able, for the first time, to really hear the lyrics. The vocals could generally have done with a higher volume. As Steen’s ironic and gritty lyrics were lost slightly on “Tasteless”, a quick paced dissection of the music industry and mass consumption. 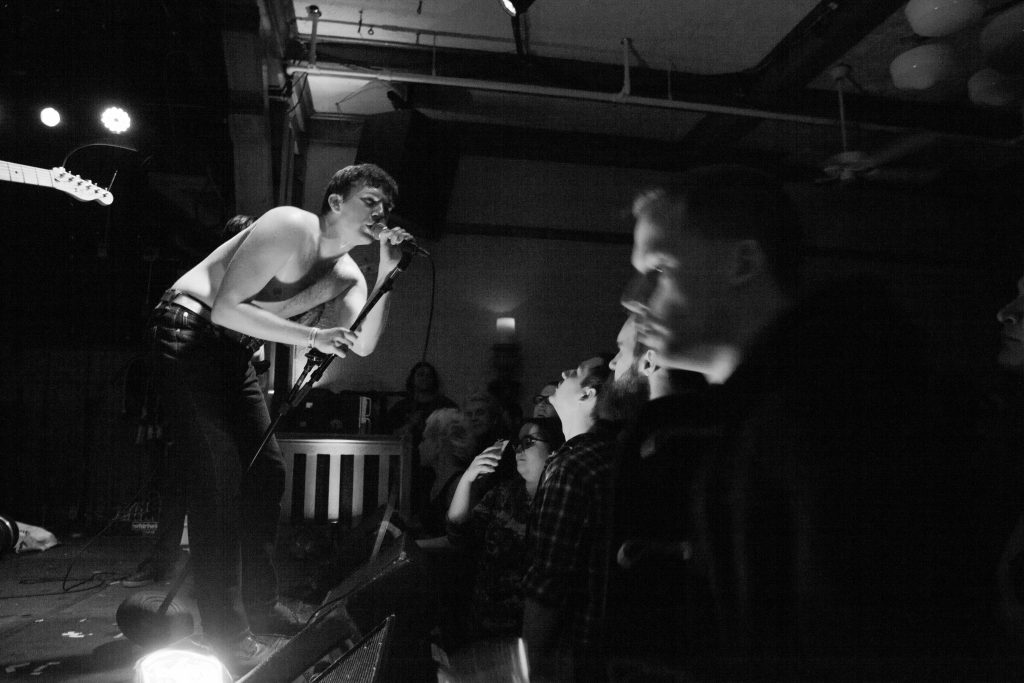 As we headed into the second half of the album, the band started to get more into their groove bring the high energy performance which has come to be expected from a shame show. During the ring guitar chords of “Tasteless” Steen held his arms open to the crowd, welcoming them to come come closer. During “Friction” we saw the resurrection of Christ but a shirtless and nipple rubbing one. Steen started pacing the stage encouraging the crowd to not be afraid.

The band then departed from the album line up, skipping ahead to the end track “Angie,” a slower break from the playful anger of “Tasteless” and “Friction.” “Angie” an ode to a young girls suicide, with distinct Oasis guitar and sing-along chorus vibes. On the penultimate song “Lampoon,” shame ramped up the energy, and the crowd responded by forming a small but dedicated mosh pit. During their final song “Gold Hole,” a tale of lecherous love, Steen attempted to walk on the crowd, while bassist Finerty fully let loose falling on to his back and bouncing back up with surprising agility.

Green kept pace throughout the whole show with constant head thrashing, bent over while playing some fantastic riffs. Smith kept the songs glued together with a driven rhythm guitar. Drummer Forbes never missed a beat, providing the driving force of the sermon. With the album a short and snappy 39 minutes, the set was over in less than an hour. It would have been great to hear a few of shame’s older songs, such as “Visa Vulture,” which has a great ironical croning tone.

Leaving through the sweaty crowd of Schubas to smoke cigarettes and talk more with fans, Shame had successfully converted a crowd of folded-arm head-nodders to a congregation with hands held high in praise. Songs of Praise is certainly an album to be reckoned with, and Shame a band to keep a close eye on.