A community congregates Thursday nights at Elastic Arts. These are the same people you might see any given week here, the same who sit around the island, the same on the couch, the same sitting in the front row taking photos. Concerts at Elastic Arts have always felt like stepping into a family to me, a large disjunct family who all like weird, exploratory, awesome music. And no matter how long I spend outside, there is a sense of homecoming whenever I step throw those doors. 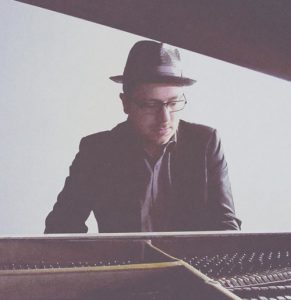 Homecoming, a word I would use to describe Paul Giallorenzo’s entrance to the stage on Thursday night. The newly ‘former’ executive director of Elastic Arts, took his seat at the piano on Thursday night to a crowd of friendly faces that would only grow throughout the night. Paul, along with Dave Rempis and Sam Lewis also in attendance, started Elastic Arts over 15 years ago in a converted church in Humboldt Park. Their location, and importance now as a fixture in the Chicago improvised and creative music scene is an extension of the network of friends and performers feeding energy into the space from the beginning to now. And so this is a homecoming for Giallorenzo, his album release could not conceivably be anywhere else, this is his space, this is his community.

The music starts with a motif common to many of the tracks on FLOW, Giallorenzo’s new record out on Delmark — an interlocked ostinato bass line between piano left hand and bass. There is a grounding in the ostinato, a grounding in Joshua Abrams solid repetitions, never wavering, always holding the music in place and pushing forward. Mikel Avery starts up his drum set and the trio moves as one, full force through the “rolling” lines of Giallorenzo’s coy right hand melodies. So often Thursday nights at Elastic are spacious, are astral moving through zones of free improvisation, and these three musicians are certainly no stranger to musics like this, but October 12th was something different, something more earthy, more grounded. As Abrams starts to walk, I try to remember the last time I heard a walking bass line in this space, and aside from the music played before the show, I honestly can not. The bass can be a grounding instrument, aligned with time. And that walking bass line of tradition itself is too a grounding force, something many struggle at a certain point in their musical lives to separate from (maybe that’s why so many of us have ended up with our heads in the clouds?) Giallorenzo’s is two feet on solid ground music, is rooted music in the tradition of piano trio music, in the sound and stylings of Thelonious Monk and Cecil Taylor. It’s refreshing to move your toes in the earth sometimes, to remember perhaps the jazz you first heard and first fell in love with.

It’s in this remembering these three musicians play, and you can see it on their faces as they smile on at each other, challenged by the music Giallorenzo has written. Writing music is a reduction of possibility, a constraining towards what cannot be, but without constraint what would we need creativity for? Avery smiles at Abrams, and on the second to last tune he breaks his G string, this is reduction too, and Abrams smiles on. There is a joy to operating within the construct within the tradition, there is a challenge to saying something new in a book with already so much written. And the Paul Giallorenzo trio does all of this, subtly, with restraint, all operating within the minimal. My head hangs on every note, every slightly disjunct tinkling piano line, every rattling snare hit responding to or prompting some boom or jab from Abrams. In so much jazz I hear or, tradition or innovation, and I am refreshed to hear and tonight. As I search for a ‘how’ in this supreme and I think of reserve and reduction, the careful attention of writing music, of constraint, of one note references and quiet clustered comping. I come to the word minimalism. In Ben Remsen’s liner notes to FLOW he mentions the minimalism of Giallorenzo’s playing many times. His playing and composing is an economy of speech, saying much with little, moving forward in small steps, and we as the audience are invited along for the ride with the smallest of gestures. And suddenly I know this is FLOW, this is piano trio, this is Paul Giallorenzo, this is Elastic Arts, moving forward with small steps in all directions.

FLOW is out now on Delmark Records.