Eleganza. Basking under fluorescent array of lights, Snoh Aalegra shone like a multi-dimensional jewel within the darkness of Park West Theater. This was quite literally as Aalegra performed her entire set dressed in a skin-tight body suit dripping with thousands of tiny crystals. Every arm stretch, hair twirl, and hip thrust caused a blinding symphony of color which was only subdued by an elusive fog that surrounded the stage.

However, before she could embrace the stage, Aalegra was introduced by two of her openers. Giveon, a young R&B artist, started off the night, projecting the audience into a hail of soulful croons and vocal runs. He was backed up solely by the running scales of a synth piano, allowing the audience to focus on his raw vocals. Giveon held the posture of a musical veteran on stage, with audience members visibly vibing out to his performance. Even with a miniscule discography of only three songs, Giveon effortlessly filled his time on the stage with constant audience interaction and light-hearted jabs at Chicago’s weather. “Chicago’s not as cold as I thought,” he stated jokily with a laugh. After garnering a defensive uproar from the audience, he cheekily responded with, “Damn, it’s actually freezing in here!” Thoroughly leaving an impression, he wrapped up his set and, with one last cheeky act, hastily scribbled his phone number onto a small slip and handed it to a lucky audience member.

After a half-an-hour intermission, the stage was once again filled with band musicians and the final opener: Baby Rose. Already a rising R&B star, Baby Rose has made recent waves in the music industry by receiving co-signs from fellow artists J. Cole, SZA, and Kehlani. Possessing a husky voice with a honey-like thickness, she warbled selections from her acclaimed debut album, To Myself, to which many of the audience members sang word for word. “Sometimes, I’m not in my feels. Sometimes, I want my ex to see what the fuck he’s missing out on,” she proclaimed.

However, it was evident throughout Baby Rose’s performance that she was struggling to project her vocals over the demanding sound of the live instruments. Many songs off of her set unfortunately turned into a battle for dominance between Baby Rose and her band, with her vocals usually being drowned out by the background music. Despite this, she was still able to power through her set and even turned the tides during her last two songs. Ending her set with the song “All To Myself,” Baby Rose reminded the audience why she remained a popular staple in uprising musicians conversations. With introspective lyrics about the desire to call a certain someone when intoxicated, her powerhouse voice was able to pierce through the venue and ultimately display her evident artistry and talent.

After the openers’ spectacular performances, the audience was bubbling with anticipation for the night’s main performer. However, as the night continued with no appearances from Snoh, both tension and alcohol started to simmer between the crowd. From rising arguments to intoxicated spazzes, it seemed dire that the main performance had to begin soon before the entire crowd broke into a drunken rage.

Thankfully, before things could escalate any further, an assemblage of band members finally rolled out their instruments and started off the night with “Here Now (Intro).” Angry quarreling instantaneously turned into excited screams as all attention was now geared towards the lively stage. And when Snoh finally strolled out in that dazzling art piece of a jumpsuit, all of the tension between concert goers had already dissipated.

Starting off with songs from 2017’s Feels, Snoh excitedly announced that tonight was the first stop in her “- Ugh, a mini tour again” tour, to which the audience responded with a boisterous cheer only Chicagoans could produce. Explaining that the tour was to promote her newest album, – Ugh, these feelings again, Snoh immediately jumped into a plethora of tracks from the album. Newer selections such as “Toronto” and “Nothing To Me” were especially popular among the crowd while older hits like “Fool For You” and “I Didn’t Mean To Fall In Love” garnered a word-for-word repetition from the audience.

Alongside the stellar performances, the stage elements were just as impressive. The stage was constantly gleaming with technicolor lights, each fitting the mood for the current song performance. For the sultry “Situationships,” the stage was a deep magenta with blue light beams; for the somber “Time” dedicated to her deceased father, dim red lights echoed Snoh’s vulnerability and sorrow. The ever-changing background created the perfect atmosphere for both the musicians and audience, allowing for a coherent connection between the two groups.

Snoh and her band ended the long night with the hit single “Find Someone Like You,” saying an intimate, tender goodbye to the crowd. However, not even five minutes after leaving the stage, the deafening pleas of an encore brought the performers back, much to the audience’s delight. Not being able to leave without performing her most popular song, Snoh danced around stage for “I Want You Around,” smiling the entire time. For her final goodbye, she thanked her band members and audience for a jubilant start to her tour and strolled out with a kiss, her glistening figure disappearing for good. 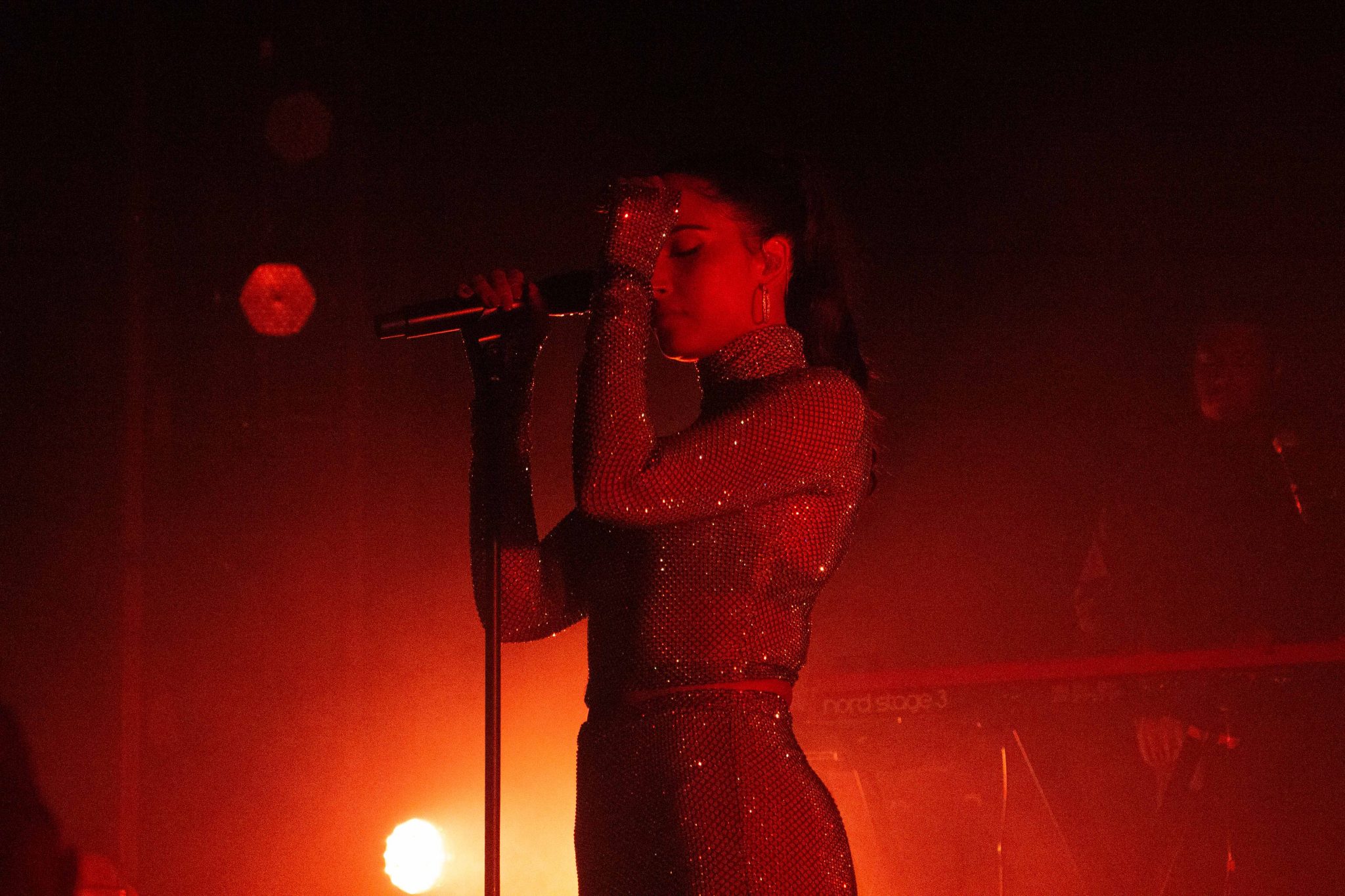 Being a Seattle native, Thursday’s night at Park West was my first concert in the Chicago area and my anticipation was high. Nonetheless, Snoh Aalegra blew my expectations out of the water with her perfected vocals, hungry tenacity, and exuding stage confidence. For a concert with soft R&B ballads and soothing soul music, Snoh’s stop at Park West left me shaking with ecstatic energy and a newly-found bounce in my step. It was certainly the best Thursday night I’ve had since coming to Chicago and I wish nothing but the best for Snoh and her team as she continues her “- Ugh, a mini tour again” journey.

I Want You Around, Situationship, Whoa, Find Someone Like You, Toronto (all from – Ugh, these feels again)