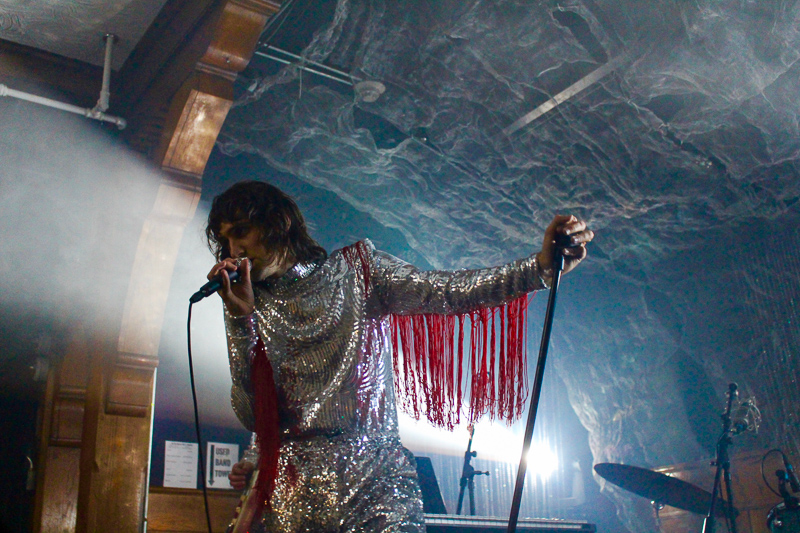 The late night (the opener went on at 10 PM) was kicked off by local band Capital Soirée, a three-piece group consisting of James Kourafas, Steven Rejdukowski, and Max Romero. All dressed in complementing formal attire, they reminded me of a stereotypical high school prom band, yet they sounded far better than any I’ve ever heard. The trio seemingly fed off of each other, bringing a very youthful energy to a room mostly filled with 19- and 20-year-olds. Dancing around the stage as they rocked their guitars back and forth, I couldn’t help but think of the pre-eminent boy band of my mid-2000s childhood: The Jonas Brothers. They bore a striking resemblance to the Disney Channel megastars: they were young, had a mix of long and short hair, and all could play a variety of instruments and sing pretty well. Being the indie rock fan that I am, however, I was much more receptive of this version. I loved their sound, from the haunting guitar chords to the jammy nature of their performance. Their songs ranged from 80s style ballads to modern indie bops, and the crowd seemingly dug everything. Fans of Brooklyn indie band Surf Rock is Dead should definitely check them out, but I think they’d appeal to just about any mainstream indie fan.

The stage was set for some super lowkey spooky vibes, both literally and figuratively. Having been to Schuba’s several times before, one of my main complaints was the lack of lighting effects in its stage design. It just seemed like a big room. On this night, however, the stage was covered in intricate tapestry and littered with cobwebs and glistening curtains. Despite Halloween being about 30 days aways, spooky szn was truly upon us. This aspect, combined with the type of sound that I knew Sports was going to bring, gave the night a certain feel that I couldn’t adequately describe. All I knew was that we were in for something special, and as three men came onto the stage in matching silver sequin jumpsuits affixed with red tassels amidst a roar of teenaged applause, I got a really good feeling. Sports was here, and it was time to play.

The self described “band of wizards from Oklahoma” started their set with one of their most popular songs, “Panama.” They immediately embraced the unearthly nature of their performance, prancing around the stage as red and blue lights pulsated behind them. The crowd, myself included, loved every second of it. By this point it was around 11:15 PM, and the time combined with Schuba’s small size made for a very intimate atmosphere. Despite their most recent album, Everyone’s Invited, coming out just last year, Sports played a mix of songs from across their three projects.

Unlike some concerts where you might see a few people who were only there because their friends dragged them to the venue, everybody was a fan. Everyone danced, whether with friends or in their own little circle, and everyone sang every word to every song. It was apparent that the band fed off of our intensity. They performed with a sort of Shakespearean aplomb, featuring wide-ranging gestures and intense facial expressions. During “Feels Like Magic,” frontman Christian Theriot dropped down on both knees and held the mic stand out over the audience, and even went into the crowd during “Letter From Heaven.” They felt even more comfortable acting like the wizards they are.