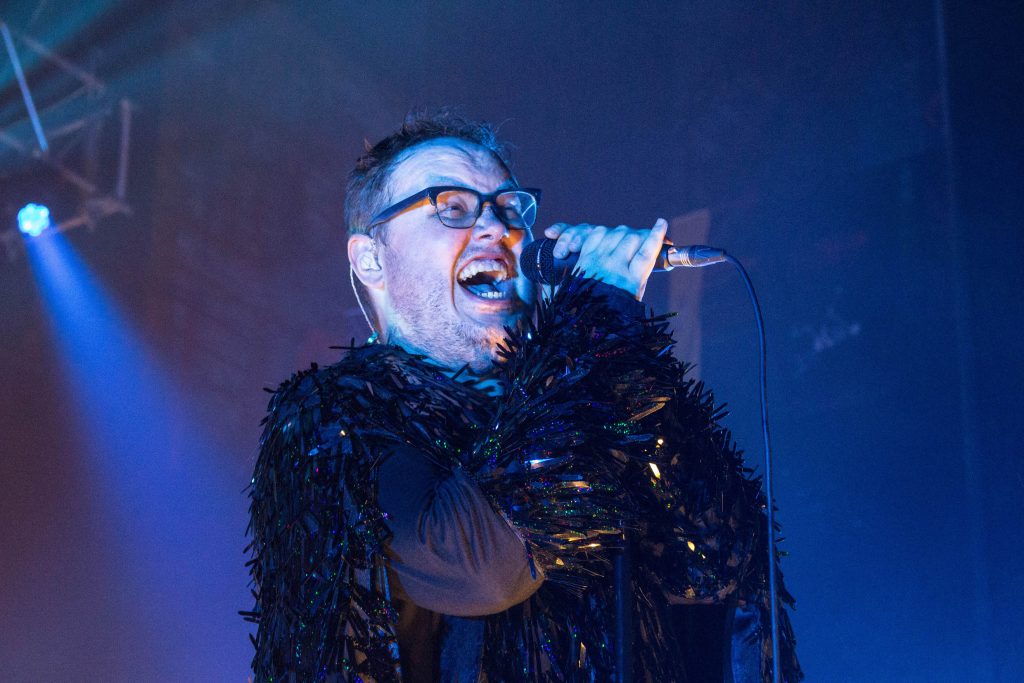 In another lifetime, Paul Janeway was probably a nerd. His warm, round face is hidden behind thick glasses and topped with a fluff of orange hair. But he was born in the Deep South, growing up with a rich musical tradition and a slow changing culture that seeps into bloodlines and passes from one generation to the next. Janeway was born with the blues. With a voice that could easily belong to Otis Redding instead, Janeway channels the pure, unrefined passion that elevates music from a sensual to a spiritual level—a truly soulful sound that would not feel out of place at church on a Sunday morning.

The now eight-piece group officially formed in 2012 in Birmingham, Alabama, and consists of guitarist Browan Lollar, bassist Jesse Phillips, Andrew Lee on drums, Al Gamble on piano and organ, Allen Branstetter on trumpet, Amari Ansari on saxophone, and Chad Fisher on trombone. Since their formation, the band has released an album every other year. This year we were blessed with their third release, Young Sick Camellia, which, as its title alludes to, examines Janeway’s complicated relationship with culture and family in the south (hint: the camellia is the state flower of Alabama). A self-proclaimed “blue dot in a sea of red,” according to the band’s website, Janeway has done an excellent job of bringing the South out of the South. By adding dance-worthy elements of funk and R&B into their soul base and questioning tradition with their lyrics, St. Paul and the Broken Bones proves to be more than just a relic and pushes thoughtful and original content out of the confines of the South and into the rest of the world. 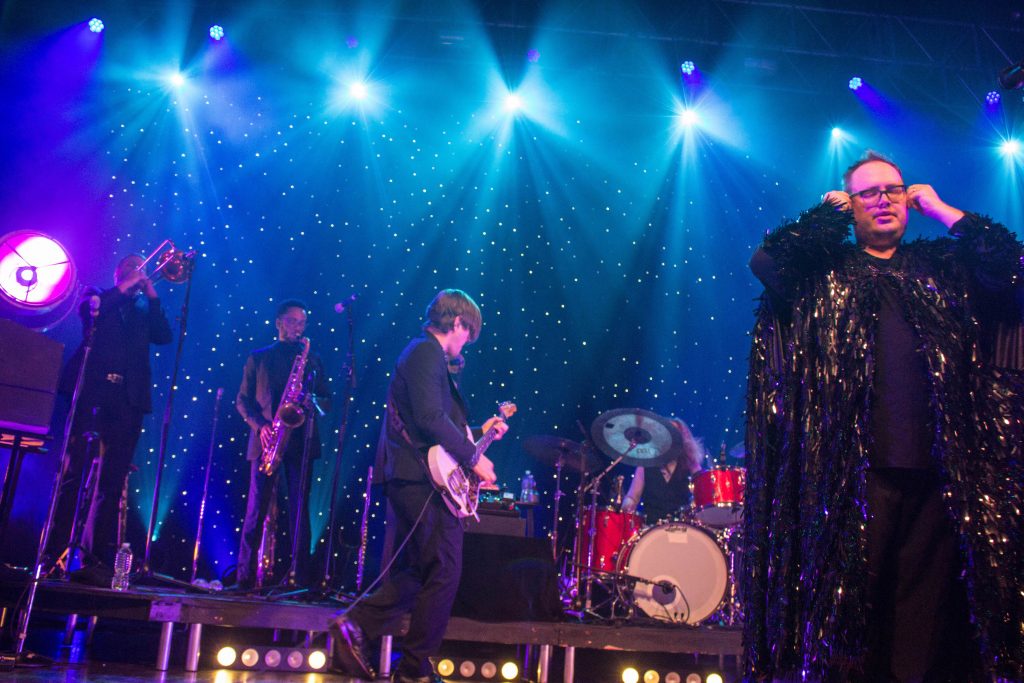 If you’re more entranced by Janeway’s booming voice than by the words he’s singing, you need only to see him onstage to realize he’s no fan of tradition. I’m not sure exactly what to call the drapery that adorned his body—a fur coat made of tinsel?—but it was certainly not something you’d find in your papa’s closet. From my low angle as a photographer, I was able to get up close with the finishing touch on his shimmering outfit: a pair of glittery, red, white, and blue Nikes. I regretted that the shoes would go unnoticed by everyone who wasn’t in the front row but it’s not like the rest of the audience had a bad view either. Flanked by an enthusiastic Lollar on guitar and Phillips on bass, Janeway commanded the stage and even broke the dividing plane into the crowd’s space. Hand outstretched like a preacher, he teetered at the edge of the stage and bellowed, “Your love is like a mighty river, baby…” Saint Paul Janeway, the preacher from Alabama, out to spread a new gospel with his broken bones. 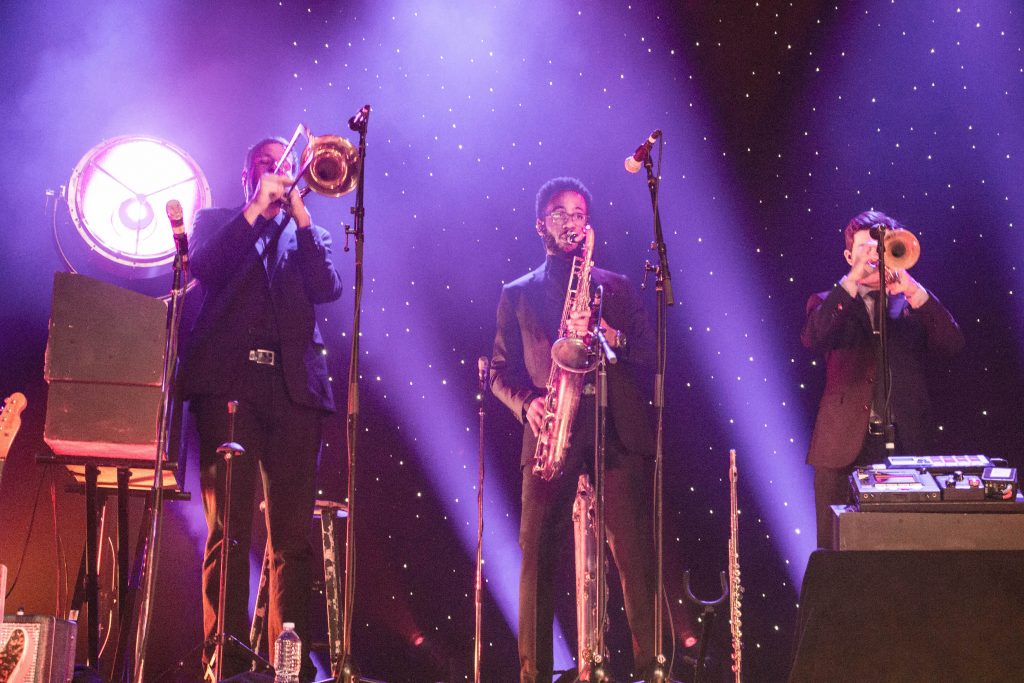 When I think of their sound, I think of the word “full.” Full of rhythm, full of different instruments, full of moving parts, full of emotion, full of life and all its complexities. I saw no less than four instrument switches throughout the show between a group of seven active musicians. And yet, even with the combination of seven instruments and Janeway’s booming voice, no one sound was overpowering. Each had its own rhythm, its own part of a harmony, and they complimented each other. St. Paul and the Broken Bones are masters at subtly manipulating the individual voices at play in their music so that their songs don’t blend together under a blanket. Whether the keys and the bass were laying down funk in songs like “GotItBad,” or the guitar hummed a slow melody like “Sanctify,” or the horns took charge in their breakthrough song “Call Me,” the complete sound was undeniably Southern but without methodically copying the classics or pushing one person to carry the weight of the rest of the band. 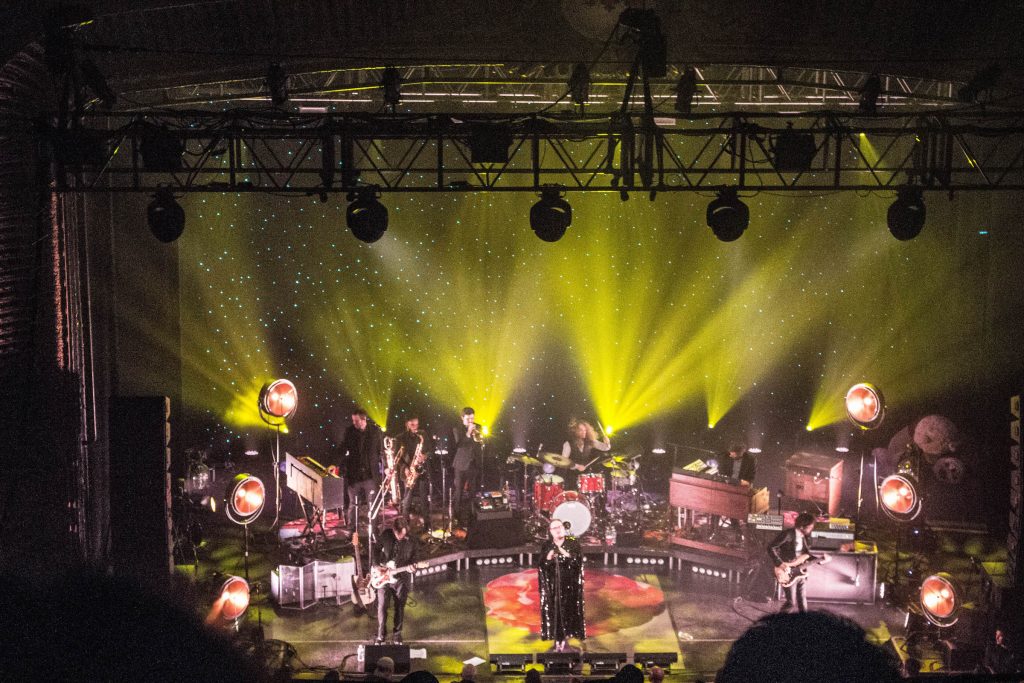 The multilayered sound of the band was in turn complemented by the Riviera Theatre itself, which plays with dimension through its tiered floor and multiple balconies that accentuate the depth of the space and draw all eyes to a focal point far behind the plane of the stage. The band chose a starry backdrop, giving the illusion of an infinitely receding space behind the band, whereas the lighting penetrated back into the audience. The band itself, at the midpoint between Earth and endless sky, became the sun—the soul—of the shared space. And boy did they have fun with it. They controlled the Riviera with light and energy that affected everyone from the Miller-drinking twenty-somethings clustered by the central bar on the floor to the fifty-something-year-old couples in the balcony. Everyone was engaged and dancing nearly the whole time. The show was way more fun than I expected to have on a Wednesday night and I’m not complaining. A conflicted Southerner myself, I loved the way that St. Paul and the Broken Bones were able to both preserve and transform traditions and create something new out of a collection of old pieces. In two years, when they (hopefully) will repeat their two-year album release pattern, I look forward to seeing what they do next.