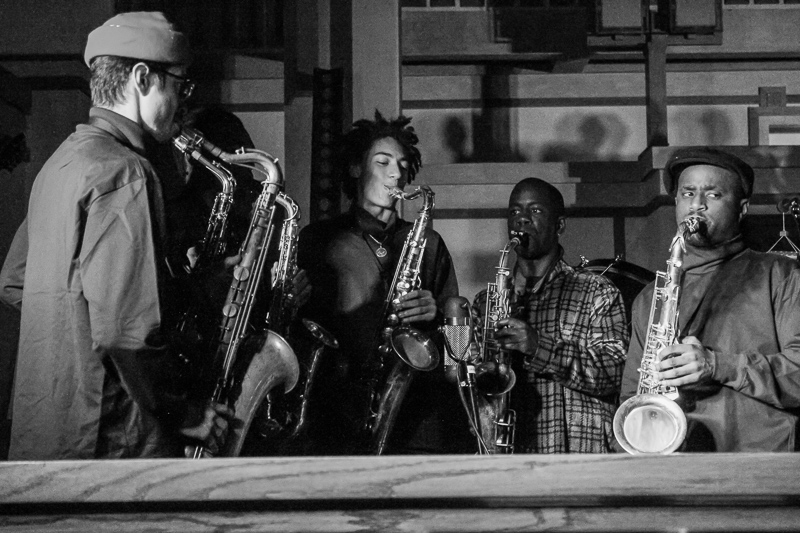 Inside Frank Lloyd Wright’s geometric, dimly-lit temple, with Solange herself packed into the buzzing crowd, the stoic Brooklyn-based collective took up their instruments around the congregation’s altar, lingered in a moment of collective pause, exhaled a jovial laugh, then all at once erupted into 90 minutes of funky, frenzied orchestral genius.

Praised for their experimental and genre-blending sound, Gio Escobar’s Standing on the Corner emerged from the New York underground as a pioneering, post-genre jazz-soul-R&B-hip hop juggernaut. Unafraid of diving into abstractly creative waters, their 2016 self-titled debut album drew from myriad instrumentals and samples, curating a wavy yet cohesive atmosphere of nostalgia and funk. Their 2017 sophomore project, Red Burns, similarly leaned into highly unique mixing and artfully anachronistic blends, the entire project comprised of two 30-minute musical meanderings, “Side X” and “Side Y.”

Recent years have seen the indie group venture into more mainstream scenes. In 2018 they collaborated with Earl Sweatshirt for his experimental album Some Rap Songs, infusing “Ontheway!” with their signature instrumentals and wispy mixing. Just last year they were given producer credits for five songs on Solange’s critically-acclaimed album When I Get Home. In their efforts to evade any sort of traditional music industry label or compartmentalizing, the breadth and depth of Standing on the Corner’s musical prowess and consistent ingenuity is becoming more and more apparent — it’s no wonder they’re drawing attention from increasingly bigger names.

Again on Friday night the group flexed their creative muscles, performing as Standing on the Corner Hope and Grief Ensemble Orchestra. Twenty four musicians — a supremely talented roster on brass, strings, drums, bass and guitar, all conducted by an exuberant Gio Escobar — presented “Zig Zag Zig,” a four-movement devotional suite. Loosely defined as the “lightning, thunder, chaos, and confusion” from which the “Supreme Being organized and created, created and organized Heaven and Earth.” I was curious to experience what the group could do absent of their digital renderings and samples. So too was Grammy award-winning artist Solange, who arrived with the Orchestra and enjoyed the show from Unity Temple’s gorgeous top balcony.

Needless to say, we were both impressed.

After a moment of isolated bass crooning — accentuated with the other musicians’ laughter and weeping — the Orchestra launched into a brass-heavy opening movement. Grand, rich sonics filled the universal church with immediate warmth and joviality. The saxophone sextet led the way, clearly responsive to Escobar’s exhilarating encouragement, while the trumpets and trombone punctuated the movement’s great moments of drama and excitement. The second movement, then, took the energy down a notch and ushered the strings sections into the foreground. Complex and mesmerizing classical texture and melody from the violins, cello and bass served as an immediate reminder of the world-class talent gathered in the often-forgotten Oak Park establishment.

“Zig Zag Zig”’s third movement was the black sheep of the show, moseying through a world of groovy percussion and funky pacing in the best way possible. Varying percussive instruments shifted the show’s tone from flowing to crackly and spunky, fireworks of beats and sonics. Escobar, still conducting, paced reverently between the pews, seemingly most relaxed and reflective in the dark, reverent space. Then, suddenly, with a swiftness similar to the quick mood switches in Red Burns, a glorious clarinet solo sparked the transition to the fourth and final movement: a layering of the previous three, amplified tenfold, brimming with tangible intensity and Escobar’s enthusiasm.

Brass, strings, guitar, percussion, Escobar’s leading movements — all were firing on all cylinders. Nothing short of a passionate musical soliloquy, this ultimate movement was the Orchestra at their most cohesive, most visibly excited, most lively and revealing of their great musical abilities. Escobar at last let a smile adorn his focused face, jumping and flailing in his directing of the show’s closing, consecutive striking notes. It was truly a grand finale’s grand finale, bursting at the seams with applause and celebration. Then, quickly and quietly, with humble waves and thank you’s for the crowd, the Orchestra departed, their musical mark solidly left on the satisfied, awe-filled audience.

Keep a keen eye out for when Standing on the Corner comes to stand on a stage near you — they’re a musical experience truly unlike any other. And who knows, maybe you’ll run into Solange!

FOR BEFORE THE SHOW:

A five-minute walk from Unity Temple, this dainty establishment offers both coffee and authentic Brazilian food items. With top-notch service, presentation and taste, Mulata made for a wonderfully quaint pit-stop before the show. Owner Cristiane Pereira and her daughter are both absolutely delightful — their kindness and charisma made my conversations with them, and overall night, that much more special. I left with a scrumptious dark hot chocolate, providing me that extra kick of warm caffeine I needed for a chilly stroll through Oak Park.