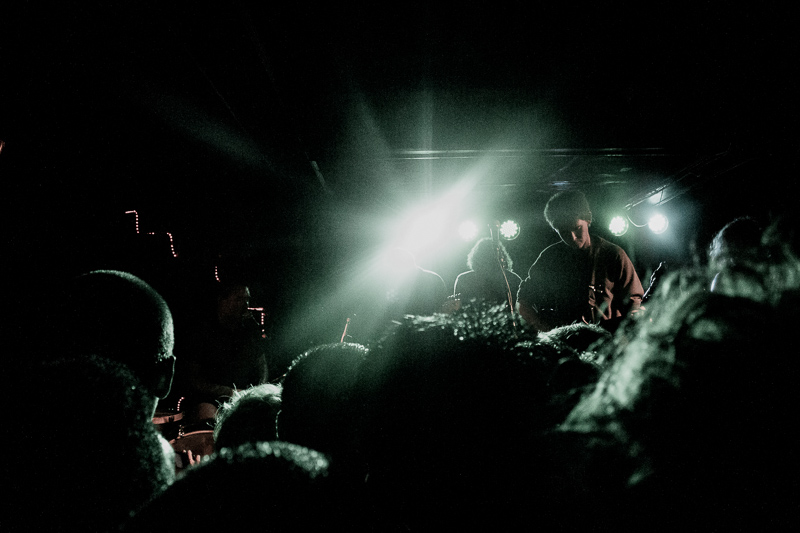 Showtime for Surf Curse’s sold out performance at Subterranean on Saturday was listed as 6 PM. So, wanting to get there early to secure a spot close to the stage, I arrived at the legendary Wicker Park venue about 35 minutes early, not expecting much of a crowd. After all, there was an opener, and from my experience the majority of the audience didn’t usually show up until about halfway through their set. However, as I walked up the stairs to Subterranean’s main stage, I was thoroughly surprised to see that about half of the floor was already filled with pierced teens donned in striped long sleeves and sporting silver chokers. I finessed my way into a decent spot and began what I anticipated to be a short wait until the first act, Dirt Buyer, walked onto the stage. Once 6 o’clock came and went with no sign of the New York-based rockers, the crowd became visibly antsy. At around 6:20, the guy standing next to me decided to curl up in a ball on the floor, because why not. “I feel younger!” he exclaimed to his friends. I believed him, the tremendously long wait honestly took years off of my life. Forty minutes after showtime, a blood-red-haired figure crept down the staircase and onto the stage, and the show was finally about to begin.

Dirt Buyer, a three-piece band consisting of Joseph Taylor Sutkowski, Ruben Radlauer, & Emma Stacher, played to a crowd tightly packed inside the narrow SubT hall. Their sound was reminiscent of a way more chill emo band from the early 2000s, which I definitely appreciated and enjoyed. Sutkowski’s performance captured the essence of the band’s music very well, as he sang with his teeth clenched, eerily hunched over the mic. He seemed almost nervous or anxious, as he jerked back and forth and grimaced as the harrowing lyrics creeped out of his mouth. Despite not sounding at all like I imagined the opener to Surf Curse would, I was impressed with what I saw. Dirt Buyer reminded me of a folk-infused DIIV, and their New York roots showed. Their grungy sound was perfect for such an intimate venue, and I could tell that the crowd was as appreciative as I was.

The wait in between the opener and the headliner was shorter than the previous one, but the packed crowd was just as impatient. A few members decided to conduct a “vibe check” during which they got everyone to repeat the phrase over and over again. The vibes were definitely high, and that was none more apparent than when Lillie West of Lala Lala fame came onto the stage. Drumming up even more anticipation for the headliners, she helped lead some stretches which the whole crowd engaged in. From that point on, I knew we were in for something special. What ensued after Jacob Reubeck and Nick Rattigan appeared before throngs of screaming fans was nothing more than pure pandemonium.

Knowing the type of music that Surf Curse has become famous for, I anticipated some moshing to occur —perhaps later in the show, when the band would probably play some of their older hits. I was proven wrong instantly. As the opening notes of the first song were cued up, I was being pushed from all directions. As a photographer, I was very annoyed. But as a fan of the Nevada-based surf rock project and lover of hype AF concerts, I was ready to engage. Thus, I spent the first couple of songs in the wings, in the midst of petrified fans who definitely were not about the moshing life, so that I could attempt to get some decent photos and just listen to the music being played.

After a few minutes, I couldn’t hold myself back any longer, and I had to join in on the fun. I had the time of my life, despite nearly losing my phone and my camera in the sea of stomping feet. The band played through their latest album, Heaven Surrounds You, which they’ve done and will do for many more shows throughout their tour across the continent. I’m not sure how their previous stops went, but this atmosphere felt truly special. Sweaty guys were taking their shirts off left and right, and people were asking total strangers to lift them up so they could crowd surf. In my concert experiences, I’ve never seen people rush the stage and not have multiple security guards usher them off, but a new concertgoer would have thought this was the norm. Near the end of the show, Rattigan came down from his drum set, grasped a spare microphone, and performed perhaps the band’s magnum opus, “Freaks,” amongst the crowd — and all hell broke loose. What transpired that night was more than music, it was an experience that I’ll never forget. Long live indie rock, and long live Surf Curse.