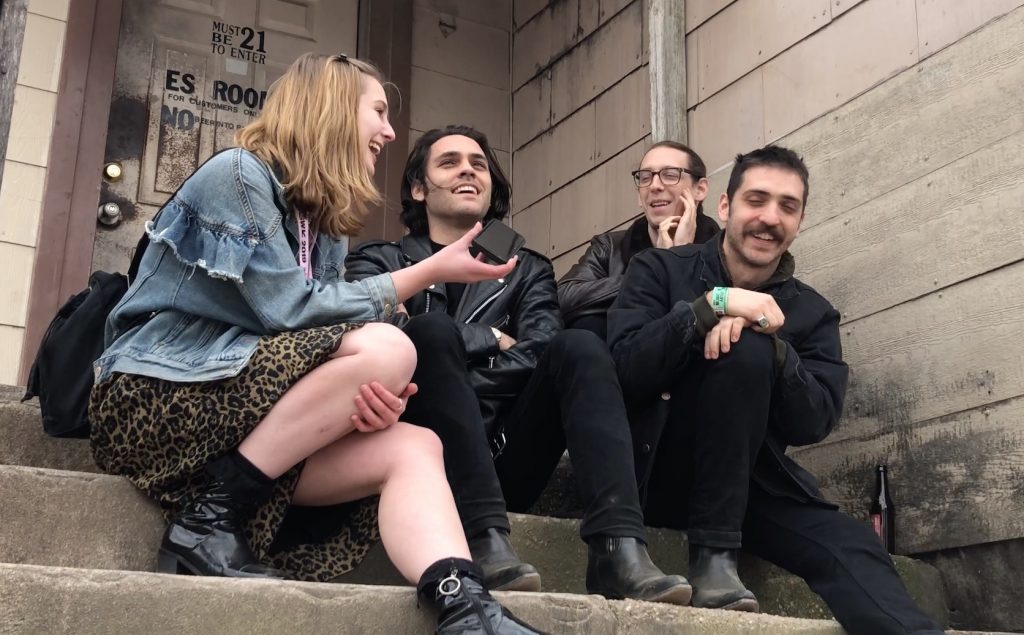 Bambara chatted with WNUR at SXSW 2019 about (pretty much) being a band of brothers, the narrative nature of Shadow on Everything and the future of noise rock.

Ellise Shafer: How did you all get your start?

Blaze Bateh (drums): Well we started when we were kids, the three of us started playing in 7th grade, and we just never really stopped. We had different names over the years, and then finally this happened. But we got here on a plane yesterday.

ES: What was the first name of your band?

BB: I don’t remember. I think we actually did an interview in high school where we said our goal was to get a CD in a CD store.

ES: Did you always play noise?

BB: It was a little different.

RB: We were kids into pop punk, so we started with that and then it slowly became what it is now. It’s hard to say, it’s just kind of been a progression.

BB: Because you always start out playing covers of bands you like and making songs similar to that. We were super into Blink-182.

William Brookshire (bass): So early on we did some of that and started writing imitation songs to figure out what we actually wanted to sound like.

ES: You moved from Georgia to Brooklyn. What has this done for your music sonically?

BB: I feel like we sound more southern now than when we actually lived in the South. I don’t know what it has actually done, I know it’s made us manage our time better because you have to work a lot more in New York.

BB: Yeah, so we like block out time to work on things specifically, whereas in Georgia you could kind of just hang around and things can come into fruition over time.

RB: I do feel like it enforced a little bit of growth, just because you have to because you’re always working on it.

ES: Reid & Blaze are brothers. How has this affected the dynamic of the band?

RB: Well, it makes it a lot easier for sure.

BB: William might as well be a brother. We’ve known him since first grade. He lived seven minutes from our house.

RB: It makes it to where any sort of disagreement is really not that big of a deal.

WB: We’ve heard stories of bands firing their guitar players at SXSW this year, and that’s just laughable to us. There will never be a disagreement where one of us gets fired.

RB: There’s a lot of communication and understanding.

BB: We all have a lot of devotion to it and an equal amount of creativity involved. Our voices are all heard at the same volume.

ES: I actually saw you guys play in September opening for IDLES. How was it touring with them? Any weird stories from tour?

BB: We first played with them in New York, we got asked to open for them, and then after the show they were like “We love you guys, you should come on tour with us.” And we thought it was cool, but we didn’t think they were actually serious until we got an email.

RB: They’re just like, the best people. That tour was one of the best we’ve had.

ES: On Shadow on Everything, the vocals are much more prominent and it follows a more narrative structure than previous records. What sparked this change?

RB: Well I think we started doing that with the last record, but for us, what we thought was bringing the vocals up really high, was not. But we’re so used to burying them in noise. We used to think that vocals should be kind of like an instrument, you know. But I think the more we messed with that, the more we were missing a humanness. We wanted there to be a human personality that’s talking to you and it ended up working really well for this record because the lyrics are so narrative and so important for the whole concept of the record.

ES: Can you talk about the concept itself?

RB: I’m a writer; I write a lot. I’ve been working on this novel for like six years. So when it came time to write this record, I was kind of still in a novel mindset so I wanted to write it as if it was a novel with different chapters. So it’s just about this town out West, based loosely on a few real places and a lot of real people. It’s just their stories and what it’s like to leave your hometown and how hard it is to stay away. There’s also a lot of dark undercurrents and things like that, but that’s the basic idea of it.

ES: Was this inspired by leaving Georgia?

RB: I would say some of it is, the idea of your hometown following you as a shadow. That’s true, but I didn’t really have trouble leaving it as some people do. Especially in New York, we’ll have a lot of friends move there – and it’s the place that just doesn’t want you to be there. It wants you out. So we’ve seen a lot of people move there and they’ll be gone in a few months, a year max. And it just feels like you’re alway getting pulled away. But for us it was easy, we had a good time. Moving together helped a lot.

ES: What’s next for Bambara?

BB: We’re writing the new record right now; that’s pretty much what we’re spending all of our time on. And we’re going on tour with this band Daughters, a small Northeastern tour.

ES: In your opinion, what does it take to make a good noise album in 2019?

BB: I mean for me, I always want to feel like I’m in a place when I’m listening to something.

RB: Yeah, atmosphere. Not necessarily a geographic location but if when you listen to a record and feel like you’re inside of it. An atmosphere, I think that’s very important.

BB: That’s what I like when I listen. So whatever you’re doing to achieve that, that’s cool.