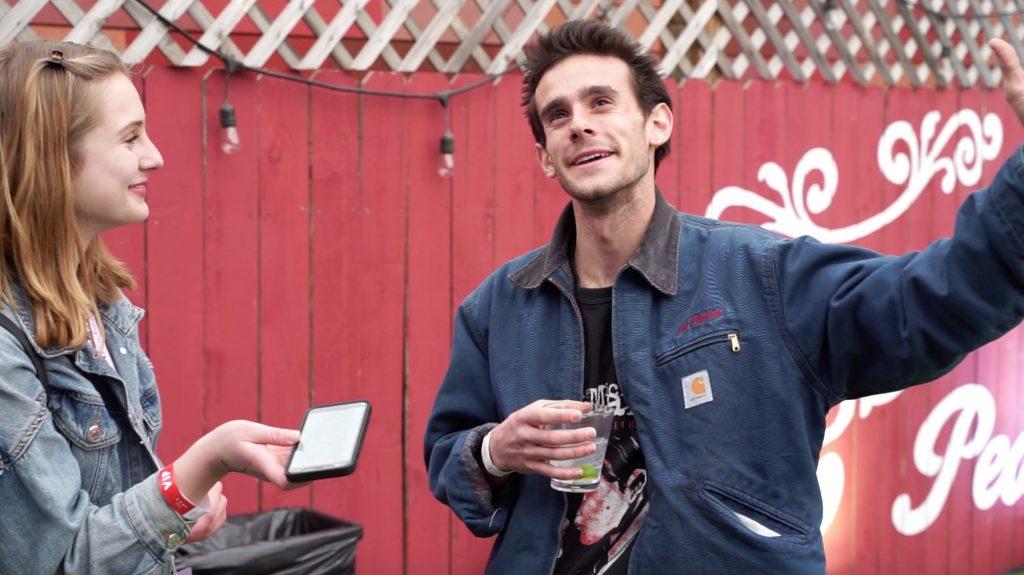 WNUR met with Shane Blanchard of Bane’s World at SXSW to discuss Flog Gnaw, bedroom pop and why the name has nothing to do with Wayne’s World.

Shane Blanchard: South By is definitely crazy. Austin is beautiful; I didn’t have a chance to really check out the city last time I was here but it’s a beautiful city. We played on a boat on Lady Bird Lake, which was really cool. I’m just getting tired, but I’ll power through.

ES: What was the genesis of Bane’s World? How and when did you start making music?

SB: My friend asked me to start playing guitar in his band and I had always played guitar, I never took it super seriously, but he came to me and he was like “Hey, I’m recording all this music by myself and playing all the instruments,” and I was like “Woah, that’s really fucking cool.” I played in his band for a while and then I eventually got my own recording stuff and I just started making music and posting it on SoundCloud and it took off. I kept doing it, and basically was just doing it for myself, and then people started to take interest in it. And I would just do solo shows, or if I had people who could play with me I would do that.

ES: Did it start out as a solo thing and then you slowly brought people on for live shows?

SB: Yeah, basically. I still wanna try to keep the recording thing as only me, but I don’t think that’s what it’s going to be. Just because I’m a control freak, I guess you could say. Not actually, but it’s really nice to have complete control over what you want to hear and not have to compromise with other people. But I’m playing with an amazing group of guys. They’re really inspiring me every time I play with them, so I think I’m going to work with them on some stuff and see what happens.

ES: Does the name have anything to do with Wayne’s World; please I must know?

SB: Oh, man. People ask me this all the time and I feel like they always get upset, but I haven’t seen that movie since I was probably like eight, and nothing really sticks out to me about it. But my nickname in high school was Bane (combination of Shane and Blanchard) and I was like oh, Bane’s World, that kind of sounds sick. I don’t really know why I decided to do that, I mean I guess I obviously knew it was like Bane’s World, Wayne’s World, but I’m not like a giant fan of the movie.

ES: I’d call you one of the pioneers of the current “bedroom pop” genre. What inspired you to start making music this way?

SB: Wow, really? I guess bedroom pop is just people who make music in their rooms or in their garages. It has to do with the lo-fi quality and the chorus pedals and stuff like that, but I’ve always been a huge fan of Mac Demarco and Homeshake, and my parents always put me onto great music. My dad loves the blues and my mom loves The Beatles and Bruce Springsteen, so it’s just a melting pot of everything they showed me and what I was able to do. It wasn’t very forced, I don’t think. Whenever I sat down to make something, I would want to make something beautiful. That’s how I would get there, you know. That’s what I think is beautiful, at least.

ES: Okay, you really blew up last year. How did you react to that?

SB: Like, the Tyler the Creator stuff? I remember I woke up one morning to like being tagged on his Instagram, and so many people were just like “Oh my god, Shane. Oh my god. Look at this.” And I woke up like “Woah!!!” It’s so surreal. It’s like, not real. You wake up and it’s a blessing, you know, that somebody will back you. I feel like my fans are really loyal and really are there to support me and they’re really cool.

ES: Did you get to hang out with Tyler at Flog Gnaw?

SB: I talked to Tyler a few times. Never really hung out with him, although I would love to pick his brain. But I haven’t gotten to. It’s been small steps and then some really big steps and then smaller ones. It’s like riding the rollercoaster up; someday it’ll go down.

ES: You’re playing Coachella this year and played Flog Gnaw in November. What are the pros and cons for you of playing big festivals like these?

SB: I really do prefer intimate shows, actually. The cons of like Coachella or Flog Gnaw, is like if you’re not the headliner – I mean you get a really nice trailer and a nice place to relax – but getting in is a pain in the ass and the security will treat you like shit unless you’re the top of the top. And it’s just like, I don’t really do good with festivals, it kind of overwhelms me and makes me really tired. But yeah, I like intimate stuff. I like stuff where people are there to see you, because that’s when I give my best shows. The energy is way better.

ES: Your live performance was very powerful, definitely different than what I expected from the low-key vibe of your recorded tracks. How have you gone about translating bedroom-made tracks to the stage?

SB: Well, I have to credit the band itself, because we’ll sit down and be like “Oh, this is what we can do,” and everybody has an input. I want their skill to reflect in what we end up doing, and the guys I’m playing with are really incredible so we have a really solid set nowadays. I don’t restrict them from doing anything, because I think that I have very malleable music, like the songs can be put into any kind of style. So if we want to do it country Western style we can do that, or if we want to do super jazzy, we’ll do super jazzy.

ES: You haven’t released new solo music since 2016. Is it coming? When can we expect it?

SB: You bet there is. I’ve been recording ever since then. I haven’t stopped recording, it’s just I want this to be my pièce de résistance, you know, I want it to be the best. When I was making Drowsy, I had made a good 25 or 30 songs and I just picked those ones off my SoundCloud and put them on a compilation thing, but I want this to be 12 or so songs that are the best stuff that I’ve made. But I’m not posting it, I’m keeping it all for myself and then when I’m done I can just pick the songs and then save the other things for later. But yeah, something’s coming hopefully this year.

ES: Are you taking a different approach at all?

SB: Kind of. It’s a lot more keyboards. It’s a lot cleaner-sounding. I’m trying to figure out my vocals a little bit differently, trying to do more vocal runs, more of a singer kind of thing. Still recording it in my garage.

ES: In your opinion, what is the future of “bedroom pop”? Does this label annoy or frustrate you at all?

SB: It doesn’t annoy me, but I’m not a huge fan of having to tell people what my genre is anyways, because people just like to categorize things.

ES: I also feel like bedroom pop is genre-less.

ES: What is your biggest dream within the industry? Are you trying to take this as far as you can, or do you have other aspirations?