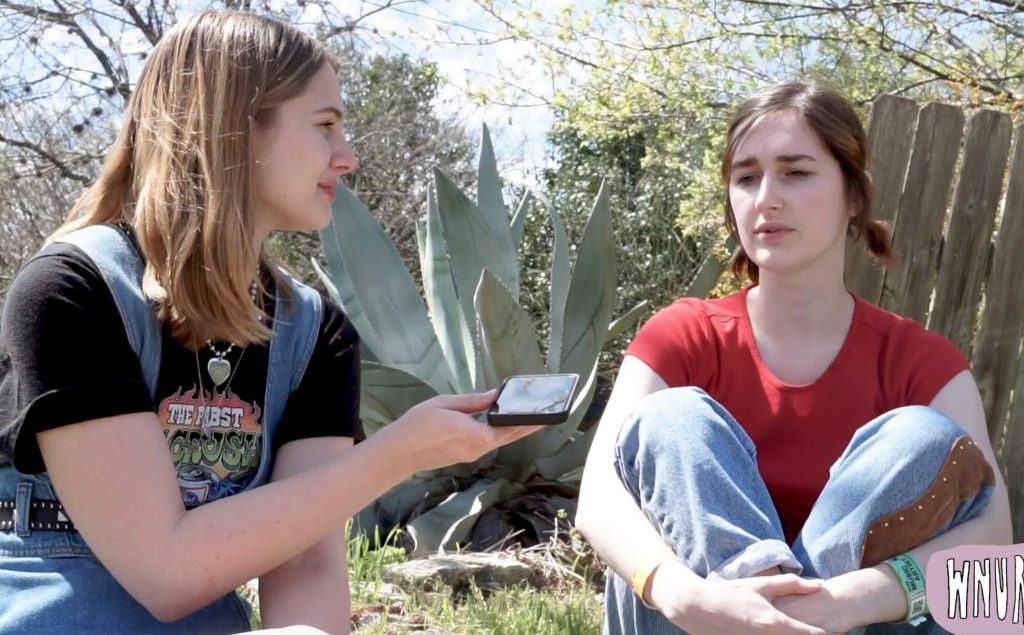 Spencer Peppet of The Ophelias sat down with WNUR next to a cactus to talk about keeping the band together through college, their 8,000 influences and “token girls.”

Ellise Shafer: Tell us about how The Ophelia’s came to be.

Spencer Peppet: We started in high school, so my senior year. I guess we’re all the same year except Micaela, she’s a year younger. And I was putting together this benefit concert kind of deal, and so I had been playing in bands before that and it was all kind of male-dominated and I was getting really sick of getting told exactly what to play by some dude who thought because he knew who Galaxie 500 were that he was better than me. I was like, okay, Guided By Voices t-shirt, like I’m done.

SP: It’s too real; it’s too much. And the thing is, everyone knows what I’m talking about. When I say Guided By Voices t-shirt, you know exactly what I’m talking about. There was a lot of that. And I had been playing in bands and I had done my own project before that but it was just, I was playing ukulele so it doesn’t really count, you know what I mean? Because I was like “Oh, I haven’t played an instrument before!” The guitar, at the time, seemed too daunting and now I know it was just because I’ve been told forever, “You can’t just pick up the guitar and start playing it. Men do that, women don’t do that.” So I was like okay, I guess I’ll play the ukulele. And then eventually, I was like I’m sick of this, I want to play the guitar. And so I picked up an electric because it was easier to play than an acoustic and I was like, “Oh, wow I can be loud! I really like that.” So I was putting on this benefit concert, and I realized that I didn’t want to play by myself so I reached out to a couple of my friends. One of my friends was playing cello and had never played bass before. And I was like, “Hey, do you wanna play music?” And she was like,  “Yeah, I’ve always wanted to try bass.” So we kind of picked up our instruments at the same time. And our drummer is just amazing and has been playing since she was like six or whatever, and our violinist is the same way and studied classically. I just got lucky, they said yes and we played a show, and I was like “Ooo! You guys are really good! Do you want to keep playing?” and they said yes and here we are.

ES: Did you all go to different colleges? How did you keep the band together during that time?

SP: Yeah, we all went to different schools, studying completely different things so our schedules are kind of at odds with each other. But to be honest, we really didn’t play very much in college just because I was in New York, Micaela was in Chicago for a bit and then moved back to Ohio, Andrea was in Columbus, and she studied abroad in Chile a couple of times which was super cool. She’s doing really cool linguistics work, it’s amazing, you should ask her about her thesis. So like, we’re all over the place and we ended up just getting lucky that we could play shows whenever we were in town on breaks. We recorded this album, and then it came out and we toured in the summer. It sucks, because you want to be doing more, and you see all these bands who are grinding every weekend, playing shows, really putting the work in. Being able to do that only for short periods of time is like “Oh, please let us do more!” We’re on tour for a month right now, and that’s the longest tour we’ve ever done.

ES: What are your songwriting influences?

SP: One of the things I really like about the four of us specifically is that we don’t have the same influences. Personally, Joanna Newsom is my top person forever, I think she’s basically a prophet. She’s amazing, all of her stuff is just like unbelievable. I listen to a lot of The Microphones, Mount Eerie, Fiona Apple. There’s so many, I could make playlists on playlists on playlists. We saw Andrew Bird last night and Andrea loves him and so does Grace. We love Esperanza Spalding. I always blank when I get asked this just because there’s so much from very different people. Micaela loves Paramore more than anything in the world. Just early jazz stuff, punk music, Fugazi, orchestral stuff, Max Richter. Kind of drawing from eight thousand different places and then trying to not make it sound like one thing; trying to make it sound like we’ve been inspired by all of those things.

ES: People have labeled your sound as soft punk, baroque rock, art rock, moth music, atmospheric… How do you respond to that and where do you think your sound fits in?

ES: Your Spotify bio mentions that you were all the “token girl” in respective bands before forming The Ophelias. What does being in an all-girl band mean to you? What do you think needs to be done to get away from this “token girl” mentality?

SP: Playing in a band with all women has been the best thing that’s ever happened to me, hardcore, full stop. I think it allows a sense of musical and emotional freedom that I wouldn’t otherwise be able to access. I do think that the whole female-fronted as genre thing kind of just needs to stop. Being a woman in a band is more than just being a woman in a band. On one hand, I’m glad that there’s finally space being made for women and non-binary people in music, but I’m also like are you going to only allow a specific set of women and non-binary people who fit into the acceptable, manufacturable, consumable versions of those things to succeed? What kind of standards are there for women? How much higher are they? I think getting rid of token girls is a great idea. I think it’s not going to happen for a long time because there’s a sense of risk when women get signed to labels. There’s a lot of misallocation of resources, there’s a lot of women who get stuck making quote bedroom pop forever because no labels are willing to take a risk on someone who sounds different than what women are told that they’re allowed to sound like in twangy indie rock: guitar solo, lead lines, *boom, boom boom chhh* and the one bass line. As long as you’re doing exactly what they think you’re going to do, then you can be successful as a woman in music. But if you’re not, you have to work much harder.

ES: You released your album Almost last year. What was the recording process like?

SP: This was a long process. We recorded the basic tracks for the album in 2016, so we did all the basic tracks, it took us like three or four days because our friend recorded it at this studio that has since been shut down. Rest in peace Ultrasuede, you did such good for so many people. We love you. But we recorded it there, our friend got free studio time because he was interning there, so he engineered it for us and we were going to work with him and then things got kind of complicated so we ended up shelving it for a little bit and not really thinking about it. We were like, how are we going to make this record, like how is this going to come out of the woodwork and become an album. We played a show with WHY? in Cincinnati and the head of Joyful Noise came to that show and we were like “Hi,” and then a couple months later they were like, “Let’s do this,” and we were like, “Fuck, okay!” So then we decided that Yoni [from WHY?] was going to produce it, so those tracks kind of got dug back up because we had them and they were ready to be twisted knobs on. We had all of those, and then kind of just jumped immediately into the mixing process. I did a couple of things as a solo act while I was in college because I was still writing music, and I released something summer of 2017, which feels so far away right now. I put out a solo EP called Moon Like Sour Candy, and I sent the title track to Yoni and he was like, “Oh, we have to put this on the album.” And I was like, “Okay.” So I flew into Cincinnati and we did it in one day and then I flew back and continued to do school. I wasn’t there for a lot of the mixing. Grace was our assistant producer, so she sat in for everything and was the voice for the band since we were all over the place. She did amazing work. Some of the really cool effects and things were her idea, and they would try things and send it to us and we would listen to it, we would call them, we would have Facetime sessions – so much technology went into it. And so we worked with Yoni and he would go far one way and we would pull him back the other way, and we would go one way and he would temper us with this other thing, and finally we ended up with Almost and we released it and it got put out into the world.

ES: Going off of that, how has it been signing with Joyful Noise and joining the ranks of Kishi Bashi, Good Fuck, Ohmme, Surfer Blood, etc.?

SP: Oh, man. They’re so cool. They were one of my favorite labels in high school. I remember sitting and listening to a Joan of Arc record and being like, “Ugh, it’s so good, I love Joyful Noise, they have so many good bands!” And flash forward to three years later… If I had told my 18 year old self like, “Hey, you’re going to sign to one of your favorite labels,” she would have been like, “Shut the fuck up, no. Go away.” They’re some of the kindest people that I’ve ever met. They’re lovely. I have only good things to say about them. I think they do a really good job of having so much diverse music on their label, and they do a great job making it into cool pieces of art with all the vinyl stuff that they do. Big fan. I love them. They’re so cool!

ES: What’s next for The Ophelias?

SP: We’re doing this, we’re going to be back in Cincinnati in mid-April I think, and then a bunch of stuff. I’m doing some composing for film scores, so I’m doing two of those, one for a short one for a future. Andrea has to finish her thesis and then she’s graduating. Grace is actually currently in San Francisco doing a co-op, so we have a sub-bassist who is amazing, I love them so much. And so Grace is finishing that, she’s still in school, Micaela’s still in school, and honestly we’re just gonna keep touring and we’re gonna make another album. I’m ready. You know a lot of those songs are from 2016 so I’m sitting on a backlog. Let’s bring the backlog to the front.

ES: Anything else you’d like the people to know?

SP: College radio is one of the coolest things in the world. I love it and I think that it’s A) an underutilized resource, and B) something that if you’re not in college yet I highly recommend looking into. Underrepresented and educational programming, forever.