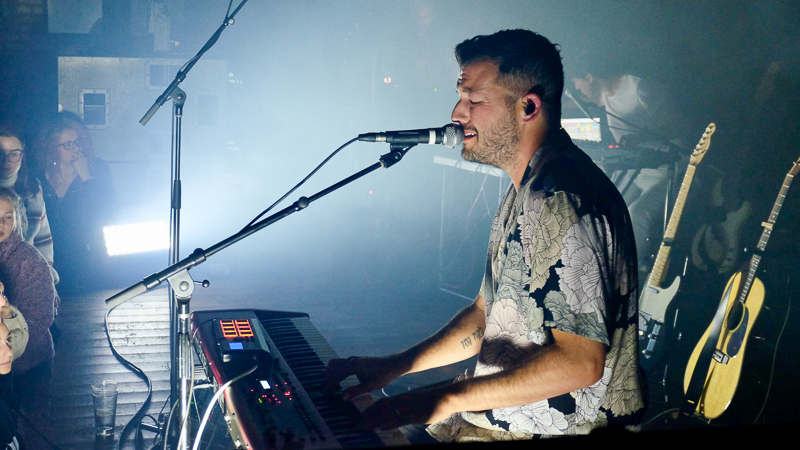 I walked into Lincoln Hall on Sunday completely unsure what to expect — but I received a show that defied concert norms in the best ways. I had never listened to Handsome Ghost before the show, but in Lincoln Hall they had a cult following. They first blew up in 2014 with “Blood Stutter,” a song that Tim Noyes, the lead singer, wrote and produced in his bedroom. From the moment he opened his mouth it was clear why; his voice had a richness that filled the room completely, making me feel like his at-times-haunting melodies were echoing inside of me. Eddie Byun — the second member of Handsome Ghost — joined in 2015, and adds backup vocals and instruments to the melodies. Handsome Ghost had no pretension whatsoever about them. They took frequent breaks to chat with the audience and to tune their instruments, making the show feel even more intimate than it already was. For a band who gets hundreds of thousands of streams to make you feel as if they’re playing you a private show is remarkable.

When they announced that they only had two songs left, audience members yelled, “play your whole album!” When they asked if we were excited to see SYML, a different audience member yelled, “You guys are better!”  This almost cult-like love for Handsome Ghost extended to cell phone etiquette — throughout the entire set, I saw two people take a photo or video. Every other person was completely entranced in Handsome Ghost’s show. Personal set favorites were “Blood Stutter,” “Reckless Lover,” and “Fool,” which really showcased Noyes’ vocals and lyrical genius.

SYML’s set, like Handsome Ghost’s, defied all of my expectations. He played for an hour and forty minutes, and like his opener, he made his time on stage feel intimate and enthralling. SYML is the solo project of Brian Fennell, who used to be part of the band Barcelona. My friend described his music as “2 am vibes,” or what she’d listen to after a night out to wind down. Though a lot of his live music fits this, his sound cannot be fit into one genre. His set was at times grungy, at times dancy electro-pop, and sometimes music that made you want to curl up and cry — which some audience members did. His set drew you in and took you on an emotional journey with him. He talked about how writing his music and playing each show was a type of therapy for him, and as he closed his eyes and lost himself in his melodies he transferred emotions to the audience as well.

During “Flags,” a song about losing loved ones to cancer, and “Meant to Stay Hid,” a song about loss, I saw multiple audience members crying, with the man in front of me falling to the floor to break down, creating an almost surreal transcendental environment. Other highlights in his set included “Wildfire” and “Break Free,” which got the entire audience dancing, and a heartwarming acoustic version of “Girl,” which he wrote about his three year old daughter.

Right after playing “Break Free,” in the middle of his set, he broke to have a chat with the audience. Usually when an artist does this, it’s a way to transition between two songs, and not really a conversation but more so the artist speaking at you. When Fennell said a chat, however, he actually meant a chat, breaking out his whiskey and talking about everything from the beanie he wore for two years straight, to how malort is horrible, to using his privilege and voice in a society that takes away voices for so many. He answered any questions audience members had for him, and sang happy birthday to three members of the audience, saying that “you guys picked a really unique birthday experience with all of these sad songs.”

He then resumed his set with his newest release, the sometimes haunting-sounding “Symmetry,” and a few songs later, he ended his regular set with my favorite song by SYML, and my second most listened to song of the year, “Clean Eyes.” Instead of having an encore, SYML broke concert norms once again by asking for audience recommendations, yelling that, “This is the time where you shout out the songs you paid money to see that we haven’t played yet.” Both Handsome Ghost and SYML put on a unique, intimate, concert experience that made it clear how much they care about the people there to see them. The show felt like an extended dream, an emotional journey, a rollercoaster ride of sorts. SYML is infinitely better live than in his recorded music, and I absolutely recommend seeing him if you can.