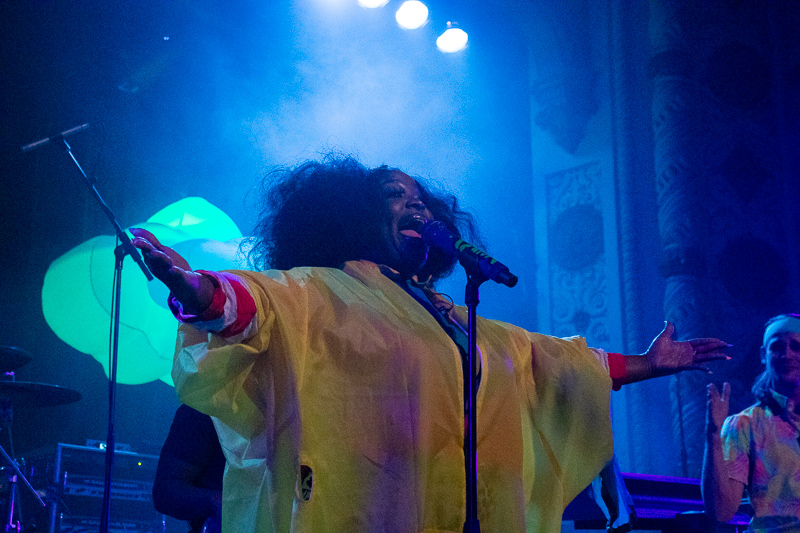 Like many other hard-working bands, New Orleans collective Tank and the Bangas steadily built a reputation by grinding it out on the road. After touring a variety of venues in and outside their hometown, however, the band’s hustle came to a halt when they won NPR Music’s Tiny Desk Contest in 2017 (beating out more than 6,000 competitors). The victory put the band under the national spotlight, catapulting them onto larger stages like Glastonbury, Coachella and Lollapalooza.

Tank and the Bangas released their first major album Green Balloon in May this year. The smooth transitions make the record an easy listen, but the power and singularity that once excited me in their Tiny Desk performance are nowhere to be found. I came to realize that what makes the group so idiosyncratic is their chemistry — the way the members improvise and interact with each other. So, when I found out the band would play on stage at Metro on a Thursday night, I didn’t hesitate to leave my homework behind and hop on the train to Chicago.

The concert was like a dense, dramatic broadway show. Echoing the album’s name, a green glow emerged from the doorway to the main standing area. Backstage, members littered plenty of balloons onstage, leaving some of them floating and being thrown around among the audience. Excitement accumulated in the air and finally burst out when the band emerged in an exaggerated fashion, with lead singer Tarriona “Tank” Ball lurching around in an inflated yellow jumpsuit.

Ball started with a rousing rendition of “Quick,” the song that won them the Tiny Desk Contest. No longer being confined in a cramped space, the ten-piece band combined various musical styles — hip-hop, gospel and spoken word poetry —into one dazzling, cohesive whole that generated so much energy that it eventually blew up in the room; just like a viewer commented on Youtube, “[I] didn’t know music could be THIS expressive, whimsical, beautiful, and chill at the same time.”

The band then swiveled effortlessly to “Spaceship,” a song that combines R&B and funk-based grooves. Ball shifted from one style to another so effortlessly, transforming her voice from one tone to another. Her emotional monologues in “Do Something” sounded so brazen in their honesty, in which she said, “My bills are late, my rent won’t wait and I ain’t got no place to go.”

Sometimes Ball seems to be an incredible actor. I genuinely couldn’t tell if she was stricken when she paused during her anecdotes. The theatre that the band created on stage when performing was just so impressive and full of confidence.

The night ended with the most epic performance, “Lazy Daze,” which got the whole crowd to swing their arms around. Everyone was swinging from side-to-side with the seven-minute grooves. All in all, Tank and the Bangas is enchanting and captivating. They have a knack for throwing everything into the performance, keeping the energy high throughout the show.