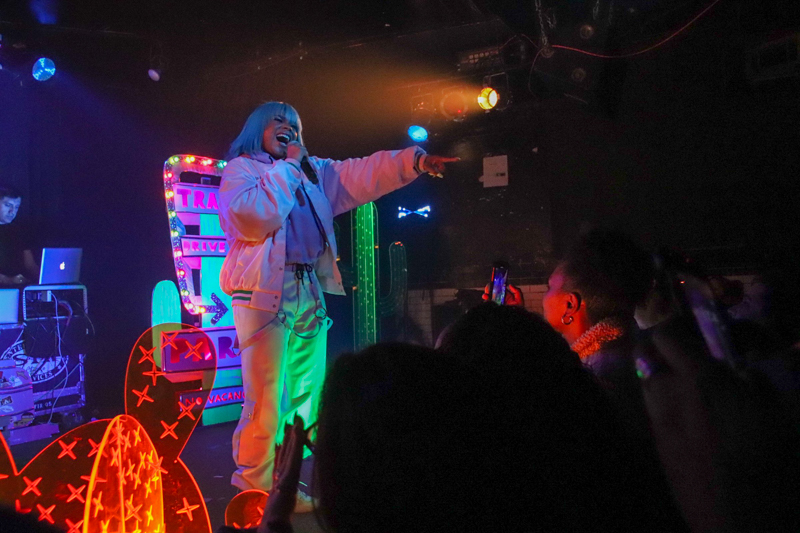 The concert space in Beat Kitchen provided the perfect setting for this intimate but energetic concert on a cold Sunday night. Walking into the venue, I could tell the crowd was filled with some die-hard Tayla Parx fans crowding the merch table and taking pictures with Tayla’s tour photo backdrop. The crowd pushed toward the stage and waited in excited anticipation for the show to start.

The opener, CJ Run, took the stage with a burst of energy that immediately got the crowd jumping and throwing their hands in the air. CJ, a Nigerian-German rapper and singer/songwriter who uses they/them pronouns, had a handful of enthusiastic fans in the crowd who belted out the lyrics to nearly every song. CJ’s stage presence was unmatched, and they enthralled the crowd throughout their entire performance. CJ appeared to have a blast on the stage with their DJ and drummer, as they taught the crowd the chorus lyrics to their song Psych and instructed everyone to pull out their phone flashlights for one of the slower verses. The crowd vibed to the beat throughout their show and audibly booed when CJ announced they were playing their last song. Needless to say, I have been playing CJ Run’s music on repeat since the concert. Check it out here on Spotify.

Tayla Parx, child-star and renowned songwriter turned pop star, who uses she/her pronouns, performed on an elaborately set up stage decorated for the theme of her tour Trailer Parx, filled with neon light fixtures and a faux trailer and cactus in the back. Tayla’s electric blue hair and smiley demeanor perfectly matched the backdrop of flashing neon signs. Tayla powered through some technical difficulties with her microphone in the beginning and soon was hopping around the stage singing one of her top songs, “Me vs. Us.” While the crowd was relatively small in this intimate concert setting, that did not stop them from bringing the energy.

About halfway through the concert Tayla sang some of her “Tayla made” songs — songs she co-wrote the lyrics for that you are sure to know. Tayla’s reach in the industry is astonishing; some of the songs she wrote that she featured at the concert included: “Love Lies” by Khalid and Normani, “thank u, next” and “7 rings” by Ariana Grande, “High Hopes” by Panic! At The Disco, and many more. Even those who had not yet memorized the lyrics to Tayla’s own songs were able to sing along to these popular hits. However, the crowd was excited when Tayla asked to go back to performing her own songs. She then mesmerized the audience with her smooth voice, singing some of her slower and more emotional ballads like “Easy” and “Read Your Mind.”

All around, this concert was a thrill to attend. CJ Run and Tayla Parx are two artists who are absolutely killing it right now — keep your eyes peeled for them and stream their music, you won’t regret it.