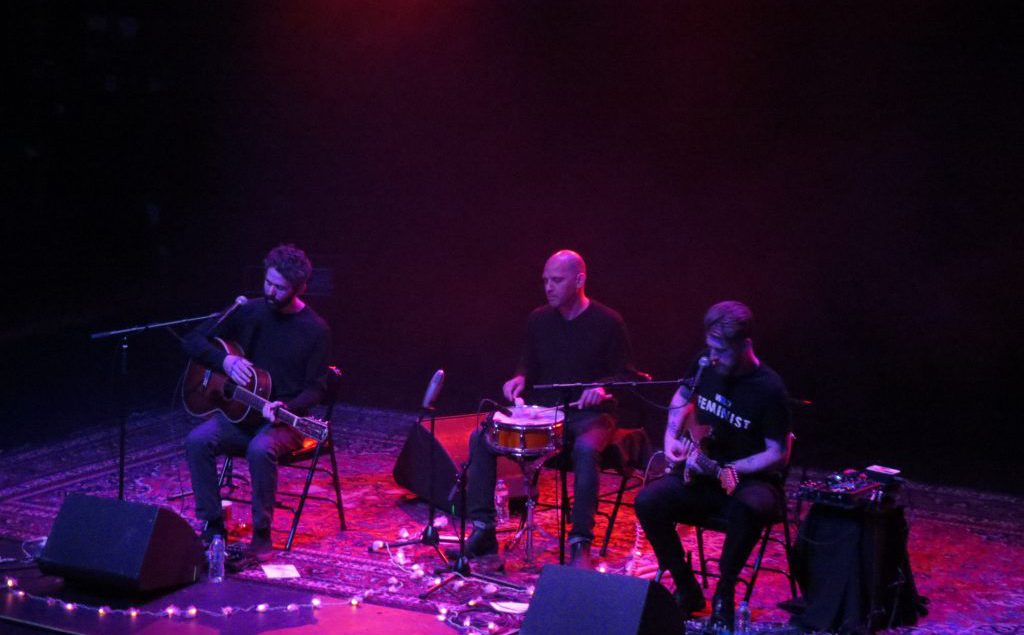 When I found out about the Antlers’ latest tour shortly after their January announcement, it was already too late: all the tickets to the only Chicago show were sold out. It felt like a slap in the face. I’ve listened to their groundbreaking album Hospice, easily one of my all-time favorites, religiously throughout the last couple of years, and now that they come to my city to perform said album, I’m snubbed a ticket. Thankfully, life sometimes works in mysterious ways, and a press pass and an extra Chicago show later I’m in Thalia Hall with my camera.

The staging of Hospice’s 10th anniversary is quite different from its original studio version to say the least: with keyboardist and trumpeter Darby Cicci leaving the band earlier this year, the remaining line-up shrunk to Peter Silberman on guitar and vocals, and Michael Lerner drumming. Their astonishingly minimalistic acoustic set-up included a single snare and was rounded out by fellow Brooklyn-based native and occasional touring member Tim Mislock playing electric guitar. 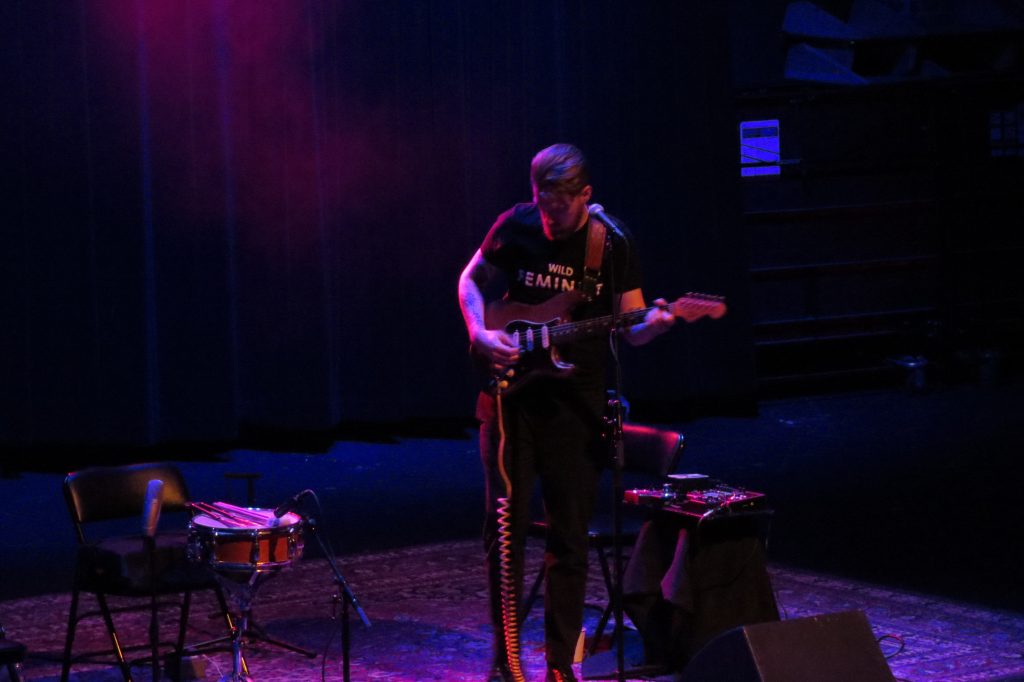 After Mislock finished his bone-chilling reverb-heavy opening set, Silberman and Lerner joined him on stage and Silberman’s haunting voice immediately set the atmosphere for the rest of the evening:

The unpayable debt that I owed you”

While the lines outline the two protagonists’ first encounter, the greatest debt of the evening was of course the one that the audience owed to the Antlers themselves for creating what can be considered as one of the most heart-wrenching albums ever made.

“Because you’d been abused by the bone that refused you

And you hired me to make up for that”

Silberman goes on, introducing the album’s plot, which is centered on a hospice caretaker and his bone-cancer afflicted patient, the two of which commence a romantic relationship early on in the narrative. As their newfound love spirals into inevitable catastrophe given the circumstances, so do the audience’s emotions.

Hearing an album which in part lives off its rich instrumentals stripped down to the bare necessities turns it even more intimate than it already is. From Silberman’s emphatic enunciation that “All the while I know we’re fucked and we’re not getting un-fucked soon” in “Bear” to his dreamy recital of “Two”, only accompanied by Lerner’s brush drumming, and finally to Mislock’s almost optimistic-sounding outro on “Epilogue”, the sincerity of the artists pulsates with every beat and every note on the album. 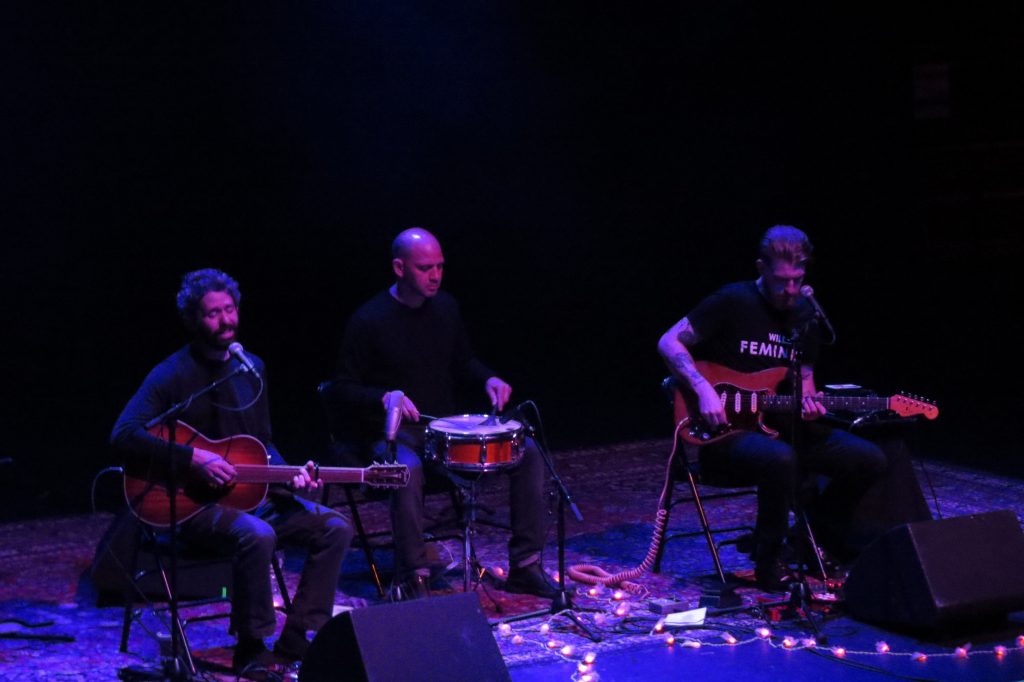 It is difficult to put into words the unique sonorous journey on which the three take us – a story which we know will make us feel miserable for a while, but which is so beautiful and unforgettable precisely because it has no happy ending.

Instead, what we’re being served is pure catharsis. If concept albums were stage dramas, Hospice would be the Oedipus Rex among them, the hubris of its protagonist being his misguided belief that he can prevent the inevitable and impending. The punishment he is being served is cruel, but it’s an excellent reminder that things don’t always work out for the better. For Silberman, Hospice was a symbolic way to move on from his own past, and I’m sure that the album has helped many listeners to go forward in their pursuits in a similar way.

After salvaging themselves from the emotional shipwreck that they’ve just caused, the trio allowed for a short break before returning with a seven-song encore. They start with “I Don’t Want Love” from their 2011 follow-up LP Burst Apart, arguably their lightest song of the night. Shortly after, “Parade” and “Surrender”, two adjacent pieces from their most recent album Familiars (2014), follow. Incredibly poignant and wonderfully melancholic, it tells the story of a young couple that keeps on going on in spite of their shared adversities.

And all we know is “each other” and invisible homes

Where all our bridges are abandoned and the cops have forgot

And I can feel the difference when the day begins

Like all I know is, “This year will be the year we win.”

We smoke the paper from the banner from our past parades

And start again, before the memory of the mess we’ve made

Clearly, dysfunctional relationships are a common thread in Silberman’s work. Rather than spanning a large range of topics, his lyrical canon is much more concentrated, but, perhaps for that exact reason, also all the more beautifully crafted.

In the same vein, the set ends on “Putting the Dog to Sleep”, a song about the pain and uncertainty of a dying relationship.

Prove to me I’m not gonna die alone

Put your arm ’round my collarbone

And open the door

That pet you just couldn’t keep

Found on their 2011 follow-up album Burst Apart, the nod to Hospice is more than just slight. It was perhaps the most poignant reminder of the night to cherish what we have while we have it. Taking the “L” back home, I couldn’t help but feel slightly shattered upon realizing the colossal emotional power that just weighed down on me. But rather than being broken, feeling that weight was also healing in many ways.

The Antlers sing about failing, time and time again, but ultimately it’s about coming out on top eventually. “To learn to succeed, you must first learn to fail”, a fellow Brooklyn native famously remarked, and it is in this spirit that the Antlers’ musical catalogue should be read. Maybe it is foolish to keep telling it to ourselves, but if we won’t believe in that age-old mantra, then no one will – so why not make this year the year we will win?