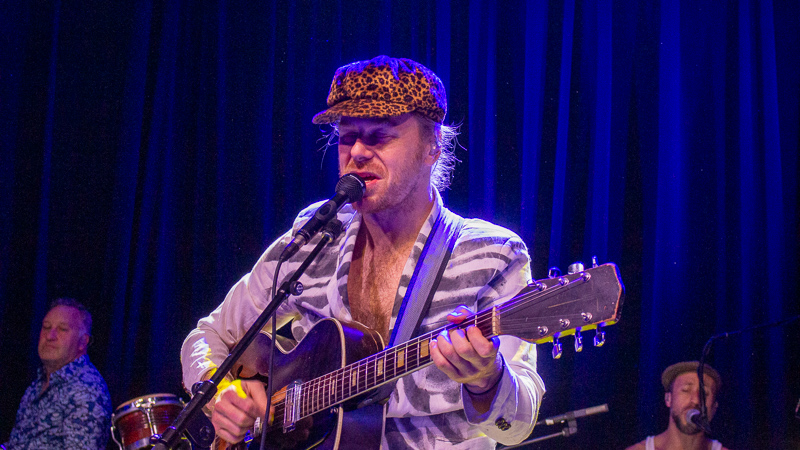 Despite the single-digit windchill and snow on the ground, The California Honeydrops brought Pacific sunshine to Lincoln Hall on Wednesday, Nov. 13, delivering two full sets separated by a 30-minute intermission.

Constantly trading instruments and interacting with the audience, the seven-piece blues and R&B band is pure fun. Incorporating into their music the saxophone, trumpet, and Latin American percussion, the Honeydrops seamlessly drift into jazz and soul, making music in the same vein as bands like Nathaniel Rateliff & The Night Sweats and The Dip. They sound like a New Orleans blues collective that washed up on a Malibu beach.

The band opened with “Every Once in a While,” a laid-back, horn-driven tune featuring an audience-led “heyyy hey hey” after each line in the verse. They then launched into a rare cover of Bobby Charles’ “Street People,” with frontman Lech Wierzynski ripping an electro-acoustic guitar solo reminiscent of old blues clubs. As Wierzynski cautiously teased the audience with sparse riffing over a spacious blues instrumental, a man in the audience yelled out, “GO!”

The pit was less of a standing-room viewing area and more of a dance floor, as audience members swayed back and forth, facing each other and not always the band. Even the Honeydrops’ most die-hard fans seemed to care more about the shared musical experience than scoring a front-row spot.

Drummer Ben Malament captured this spirit of “living in the moment” when he called out a guy in the front row holding up his phone: “Take your last picture and let someone who wants to party come up front.”

Wierzynski’s voice is impeccable live, smoothly gliding over the band’s grooves. With the energy of a drunken cruise ship director, Wierzynski led the crowd in Freddie Mercury-like call and responses and goofy dance moves.

“We don’t make setlists, so we’re just gonna pick some songs out of the groovy little bag,” he said midway through the first set.

The band enlivened almost every song with solos, whether it be on the keys, saxophone or congas. Wierzynski even dabbled in scat singing for a couple of songs.

A clear highlight of the night was “Live Learn,” a cut from the band’s 2018 release Call It Home: Vol. 1 & 2. The song features soulful vocal harmonies, a thumping bass groove and vibrant piano licks. Over a climaxing instrumental, the band extended the track’s ending mantra: “I had to live, learn, get burned, do it again.” Wierzynski was so adamant that the crowd participated that he wouldn’t let a man holding a beer off the hook for not clapping with the rest of the audience. “You don’t have to put down your beer,” the singer told him. “Find someone else with a beer and clap his hand.”

As the Honeydrops strolled through a generously long set, time didn’t seem to pass. With an energy so undeniably positive and music so smile-inducing, the band had the crowd buzzing long after they walked off stage.