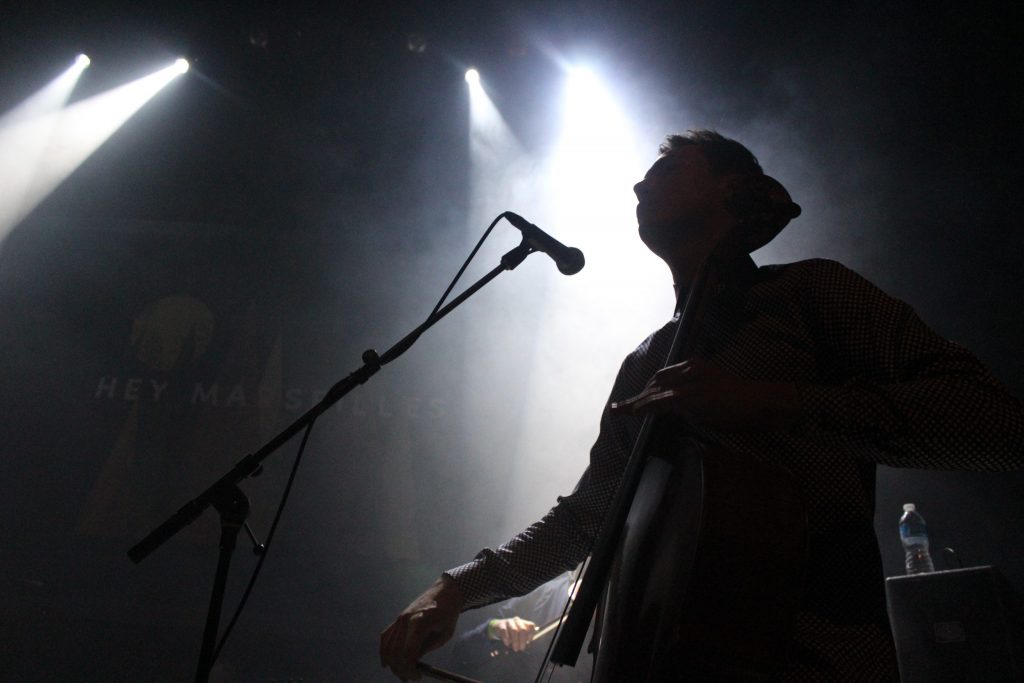 Here’s a moment of complete honesty: I hate change. I get sad when I return from a few months away at college to find that my parents have painted one wall in my childhood home a different color. But let me tell you, in the case of Hey Marseilles, change has been nothing but good.

With the Feb. 5 release of their third full album, the self-titled “Hey Marseilles,” the once folksy band has exposed its fans to a whole new side of its persona. A side that lead singer Matt Bishop says has a “shiny kind of aesthetic.”

What changed? The group brought in a producer, Anthony Kilhoffer, who has won four Grammies for his work, among which are producing Yeezy’s “My Beautiful Dark Twisted Fantasy” and John Legend’s “Get Lifted.”

Don’t get me wrong though, Hey Marseilles has kept their essence. Their unique use of the cello, played by the talented Sam Anderson, was what initially attracted me to their sound. And they have seamlessly incorporated just as many string solos into tracks from their new album as they did in 2013 when I first encountered their music.

Hey Marseilles’ Jan. 29 concert at Lincoln Hall blended their two styles just as faultlessly as their album did. Because their album hadn’t dropped yet at the time of the show, there were moments when the crowd wasn’t able to sing along to all of the lyrics. Nonetheless, the crowd’s enthusiasm was palpable whenever an old favorite was played, most notably when they began “Rio,” and Anderson tossed a maraca into the crowd.

The woman directly in front of me caught it- not that I’m salty about that or anything. But it was still a great time for us non-maraca-players, which can be attested to by the woman who grabbed my hand and forced me to do a twirl as we belted the lyrics, “Love is a hazard in lower Manhattan/You cannot escape, and mustn’t be saddened/By men who abandon your eyes for another’s/There are always Brazilian boys to discover.”

The band played several new tracks such as “Perfect Okay,” their catchy opener, “Crooked Lines” and “West Coast,” their latest single. All of the songs seemed well received, but they always brought it back to the beginning, closing out their encore with “To Travels and Trunks,” a favorite from their first album.

Despite my hesitance to embrace change, especially Hey Marseilles’ newfound lack of an accordion, I think I’ve learned a valuable lesson from their speedy stylistic transition. While switching things up to find their identity was ultimately a great decision, sometimes it’s okay to take comfort in the familiar, and it’s always okay to embrace both.

A Conversation with Matt Bishop, lead singer of Hey Marseilles

[su_quote cite=”Bishop”]Hearing what other people are writing about and having them engage in the entire process brought out some hidden talent and has been good for us all.[/su_quote] 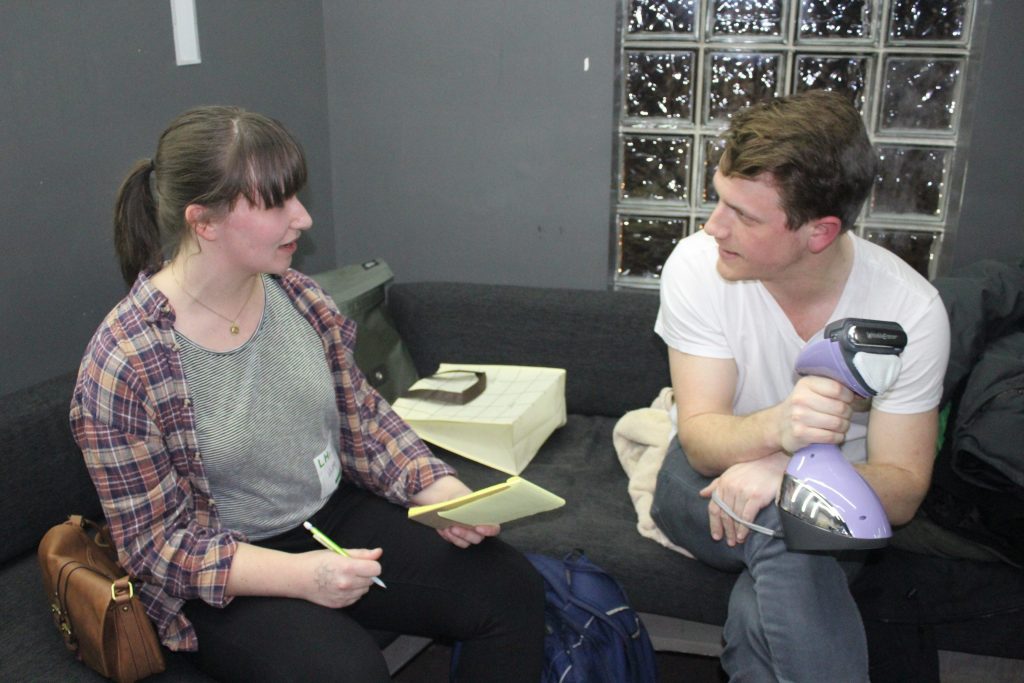 WNUR: From listening to your latest single, it feels like you guys are going in a completely different direction now.

Bishop: We used to be more folksy, but I don’t even play acoustic guitar anymore. We’re working with a producer for the first time; Anthony Kilhoffer is his name. He primarily works in R&B and hip-hop and is based out of L.A., but he’s actually from Chicago. He definitely comes from a pop music world, and this is the first time we’ve had that kind of influence. [Our music] is a little bit more focused now.

Why did you decide to work with a producer?

Bishop: We’ve been a band for nine years and it’s the same core five of us. With the songwriting process, it can feel like there are too many cooks in the kitchen, you know? On our first couple of albums, we have a couple of songs that are six minutes long, and they have all this layered instrumentation. We really wanted to challenge ourselves by doing the “less is more” kind of formula. So that was the basic idea. Having a producer allows us to have one person make final decisions instead of having five people arguing.

You guys have been together so long. Don’t you get sick of each other?

Bishop: It’s kind of like a family. I grew up with four siblings, so that’s what it reminds me of. You see the best parts and the worst parts of everyone, and you learn to accommodate that.

You guys are based out of Seattle, and it seems like a lot of your lyrics have references to the West Coast…Are you homesick? What is it?

Bishop: Yeah, we’re not very creative…it’s mostly just when we’re writing songs, and we look up and see what’s around. I really need to stop using the words mountain and ocean and gray and city. But there’s also part of that that’s intentional. That’s the experience that we come.

What do you want people to take away from your music?

Bishop: I just want them to like it. [laughs] When you’re an independent musician, you just want to appeal to as wide of an audience as possible, but you also want the people you respect, the musicians and music critics, to find something challenging and unique about your music. So I think that if we challenge people to hear it and go, “Huh. I want to hear that again,” then we’ve done our job.

What’s been your favorite part of touring?

Bishop: We are on the road a lot. I’ve ruined a lot of relationships that way, which then I turn into songs. [laughs] But it’s definitely hard being on the road so much. Our favorite part is probably just meeting people…. Every time we go to a different city, we have people that we hang out with who are genuinely nice consumers of music and it’s really fun to make those connections.

What was it like recording with NPR for a Tiny Desk Concert?

Bishop: It was the best. I’m a big “All Songs Considered” fan. Bob Boilen and Stephen Thompson and all of those guys are kind of heroes in my mind. That was really cool

and definitely a highlight of our career so far.

Your new album, “Hey Marseilles,” [came] out February 5th. What should we expect from that? [Is it] more toward the style of your previous albums or your recent singles?

Bishop: The singles that we’ve released are pretty representative of the album as a whole… It’s a bit more produced and has more a shiny kind of aesthetic. They’re shorter songs with more electronic beats and less accordion.

How do you feel about having evolved so much stylistically?

Bishop: I love it. I mean I’m a singer/songwriter… So for me, the beauty of a well-written song is in its simplicity. I think our songs are still nuanced and complicated, but they’re not as overthought.

Bishop: For this record, everybody wrote songs on their own time. It used to be that other people would write the music and then I’d write the lyrics and melodies on top of it. This time we each have three or four songs on the record and we came together to make sure they all sound aesthetically similar. But it brought diversity to the experience. I got tired of writing about, like I said, mountains and gray and oceans. Hearing what other people are writing about and having them engage in the entire process brought out some hidden talent and has been good for us all.

What do you expect for the future of Hey Marseilles?

Bishop: When you’re an independent musician, this record is kind of make or break. So hopefully, it’ll do well and we’ll make more following this same trajectory. It’s hard to know. We tend to make records every two or three years, so we’ll see if we’re still making music in that time frame. Right now, we’re focusing on this album and it feels fresh for us and for all of our fans. It’s hard to look past that.