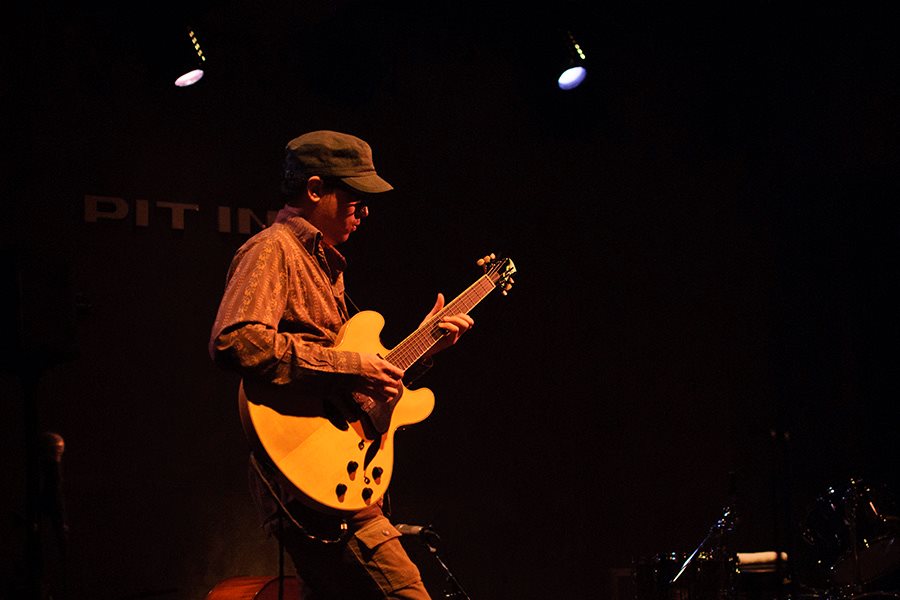 The Karma of Caipi: Interview with Kurt Rosenwinkel

Guitarist, composer, and multi-instrumentalist Kurt Rosenwinkel is among the most celebrated jazz musicians in the music’s contemporary era. It is not hard to find fragments of his distinctive melodic vocabulary and songwriting – they permeate the slick modern jazz coming from a younger generation of artists in Los Angeles and New York City (people like Kamasi Washington, Ambrose Akinmusire, and Julian Lage). Kurt has performed and recorded in various configurations: with his Standards Trio, Quartet, Quintet, the Portuguese big band OJM, and has also appeared on over 70 albums as a sideman. His March 10th, 2017 release Caipi (Sunnyside) features Rosenwinkel on guitar, bass, piano, drums, synths, and vocals and the guest work of Pedro Martins, Mark Turner, Amanda Brecker, and Eric Clapton, among others. You can catch Kurt and the Caipi band during their run at the Jazz Showcase from Thursday, March 30th to Sunday, April 2nd.

L: This project is your total brainchild. You’ve been working on it for years and it goes in a slightly different direction stylistically. What musical or life experiences inspired Caipi?

K: I guess around about ten years ago, the first couple songs came out and just kind of came through me. I didn’t really feel like I wrote anything. I saw these songs and noticed that they had some Brazillian aspect to them, and I thought, ‘oh that’s interesting, I wonder where that’s coming from.” I was in Brazil a few times, had some great times there, and I loved the music of Milton Nascimento. I think when you have a very important time in your life and there’s music that goes along with it, it becomes part of the fabric of your memory. As an artist, when songs come out and are an expression of feelings or memories that you’ve had, the music that’s part of those memories comes out in a way as well. My best guess as to where this music came from is memories of love or lost love and different aspects of life wrapped up in a lot of different music that are part of me. And this came out as Caipi.

I started to realize that all these songs were related. I would just record them in my studio as the years went by. During the year, a lot of travelling and touring. When I’m home, if I can get into a creative space in my studio, then I’ll work on these things that come through, you know, through the years. And these songs were one genre within my musical world that I kept working on, and they eventually became this album

L: I’m wondering if you could speak to the sonics of this record. There are real clear “Kurt” elements that come through but on the other hand it sounds very different from any other of your albums. Were there particular sonic inspirations from Brazil that you drew on while making this album?

K: There are also a lot of rock influences on this album. I’ve always loved rock music and British rock. And obviously there’s my jazz and personal composing style, and that language goes into it. But one of the things that was important for the album was the mixing that we did in London with a great producer and friend of mine named Paul Stacey. He is an incredible producer and guitarist. He’s produced the Black Crowes and was working with Oasis – he’s deep in the British rock scene and his musical tastes are wide ranging, as all of ours are. So part of the sound of Caipi are his sonics. And we were able to mix the album with a good amount of time, which was necessary to get it to sound like that.

B: What was your experience of playing the instruments and parts separately, of overdubbing and elongating the approach to recording and making a record?

K: I did it all on my own, in my studio in Berlin. And then I did a couple overdub sessions in New York with Mark Turner and Amanda and Pedro. I’ve always worked on music track-by-track, since the early eighties. I’ve always been doing that, as well as recording live in the studio with a band. Working on this music it was really a matter of enjoying the process, thinking of what the music needed and imagining it in my mind, and then doing it. I have a bass lying around, so I’ll record some bass. I’ll record some piano. Just doing everything that I can, and then the things that I can’t do I would call different people. To play french horn or violin or saxophone or acoustic bass.

L: Historically, the “live” aspect is such a vital and defining part of making jazz records, and the emphasis is on capturing the interaction between musicians in real time. How did this more insular style of making a record affect your creative process in terms of composing and performing the parts, and then translating the project into a live setting?

K: Yeah, there’s a lot in there. Jazz has so much to do with the interaction moment-to-moment and the chemistry of the band. I certainly would do that if I were making a jazz record. This is something different in the sense that it’s music that is formulated in my imagination and I know exactly how it should be. So my only job is to manifest it. In that sense, I can take care of each moment in the music to make it exactly how I hear it in my head. Yeah, it’s different. But the way that I hear things, it does sound like a group playing because that’s the way it sounds in my head. If I’m playing all the parts then I know how each moment of the music feels. So if I reacted on the drums to a certain moment then at that same moment I can react on the bass or guitar. Then the music has the feeling of that moment in all these parts and they are all together.

It was interesting to bring [Caipi] to a live situation, and I wondered if it might be difficult. I made a record in 2002 called Heartcore, and this was also an album that I did everything by myself at home. And when I formed a band to play that it was very difficult. But this time around, it was a very magical and karmic transformation from the recording process and that very solitary existence of making it. It translated into this group of people, we all came together in Berlin and it was kind of instant magic – chemistry between everyone in the band. From that moment on Caipi has lived in the real world, which is fascinating for me. It’s such an incredible feeling to play this music live and to hear it and play it for people because this has all just been lived in my semi-private world for the past ten years. It’s incredible to me how easy it was to translate it into a live thing. The band that I have is amazing; we’re on the road and having a great time doing our world tour. It feels very karmic.

L: The Caipi band features Pedro Martins on guitar & voice, Olivia Trummer on piano & voice, Frederico Heliodoro on bass & voice, Antonio Loureiro on percussions & voice, and Bill Campbell on drums. Can you talk about these musicians and why you chose them to help you transform Caipi into a live setting?

K: Well Olivia is from Berlin. We met in the Berlin music scene, at jam sessions. I played on her record and she’s a fantastic pianist and also a vocalist, so when I thought about the piano chair I thought about her. Bill Campbell is a drummer who I met through pianist Barney McAll. When I heard him playing it was love at first snare (laughs). I didn’t actually play with him until I flew him to Berlin and we all starting playing together and it was perfect. I just knew he would be perfect for Caipi because he has this groove, this feel and pocket that fits exactly what the sound is, it’s very unique.

Pedro Martins I met when I was president of a jury at the Montreux Jazz Festival. They have a guitar competition there. Two years ago, Pedro was one of the contestants and he was amazing. He won hands down and what he won was a mentorship. We got to know each other over this five-day period and after that we became very good friends. I already had the mixing date set when I met him but I just asked him to do a whole bunch of stuff at the very last minute for Caipi. And he kept hitting it out of the park. Everything I asked him to do he came back with the most amazing stuff.

Another thing that he won through the competition was a recording sponsored by the Montreux Academy. I produced this recording session and it was there that I met Frederico and Antonio. All three of those musicians are from Brazil, from different cities. When I wanted to put the band together I immediately thought of them because they are so fantastic.