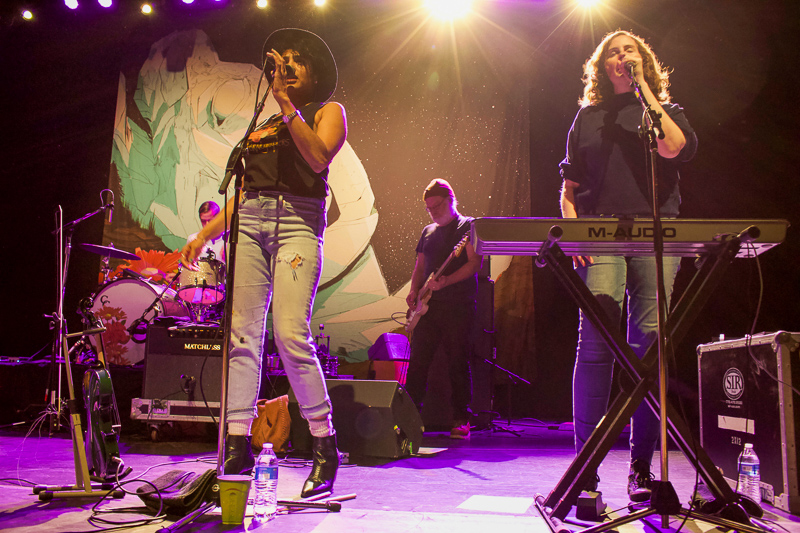 Moments leading up to entering Thalia, I had it made in my mind that I was going to see Lady Lamb, an indie folk singer-songwriter. I was trying to put together the pieces as to how exactly this small musician was able to sell out The Vic Theatre when I realized they were only opening for the established band that is The New Pornographers.

Nonetheless, Lady Lamb brought a bedroom pop meets folk aura to the hall, causing the crowd to silently stare, absent of motion. Lady Lamb alternated between chatting up the audience — much more than I typically experience from an opener — and swaying behind her microphone, but all in all, the crowd was pretty subdued throughout her performance.

Between sets, I overheard a brief conversation in the restroom, where one woman asked another, “What’d you think of that band?” To which the other responded, “That’s actually who I came for,” and instantly felt solidarity with her, but I felt excited and strange bracing myself for the main act whom I knew nothing about.

Cut to eight middle-aged people crowding the stage. The hall instantly felt exactly like a reunion show: a few members with plain shirts hiding beer bellies, a fedora wearing tambourine player, a crowd whose median age was only cut down several decades by my presence, and ceaseless sing-along energy.

But the New Pornographers would have had to gone away in order to reunite. Instead, they performed at The Vic for the same reason most bands tour — to promote their newly released eighth album “In The Morse Code of Brake Lights.”

I knew no songs before entering the hall, and I had a difficult time distinguishing distinct songs amongst all the clap-along early 2000s-esk pop rock, but all the weathered fans in the audience sure knew every lyric to every song… and made sure to show it.

Banter poured from the stage throughout the entire show, ranging from vocalist Neko Case’s anecdote of purchasing that night’s outfit — a jumpsuit labeled as “sexy police officer” in a Halloween costume store the night before, to a practice round of call and response.

At one point they revealed they’ve “been learning a few songs [they] haven’t played in a while,” which was simply a humorous reminder that they’ve been making music together for 22 years now, give or take a few additions and losses of members along the way.

Although they’ve been consistently active in the music scene, it felt as though the New Pornographers were reconnecting with friends they haven’t seen in years — both on the stage and in the crowd — during their nostalgia-inducing show.