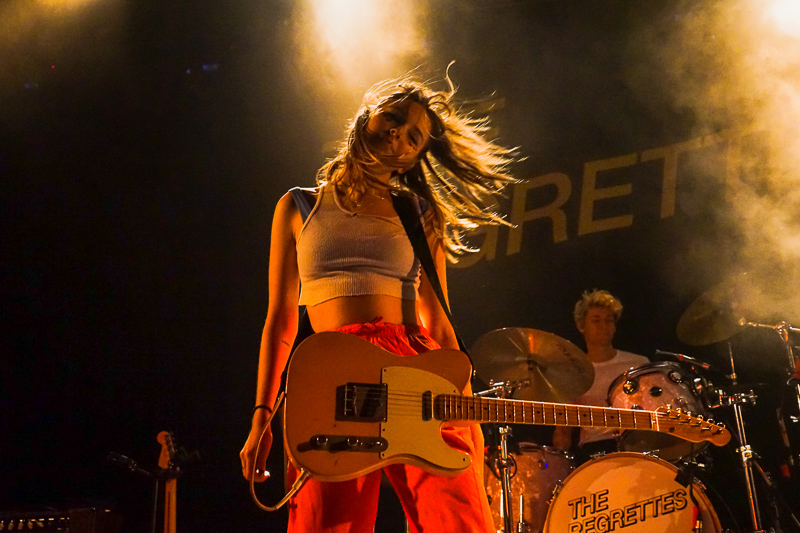 Looking into the audience, hundreds of teenage girls filled the floor of Metro with hearts stamped under their eyes and glitter glued to their faces, mimicking the signature look of Lydia Night, the 19-year-old lead singer of The Regrettes. Hours before the band took the stage, fans packed the venue to secure a good view for the performance, but were thoroughly entertained with two opening acts: Hala and Greer.

First, the band Hala, led by 22-year-old Ian Ruhala from Detroit, captivated the audience with heartwarming indie-rock melodies. Although they performed a rather short set, Hala still created a memorable performance full of electric guitar solos in their low-fi jams by inviting the audience to jump around and dance during several songs. 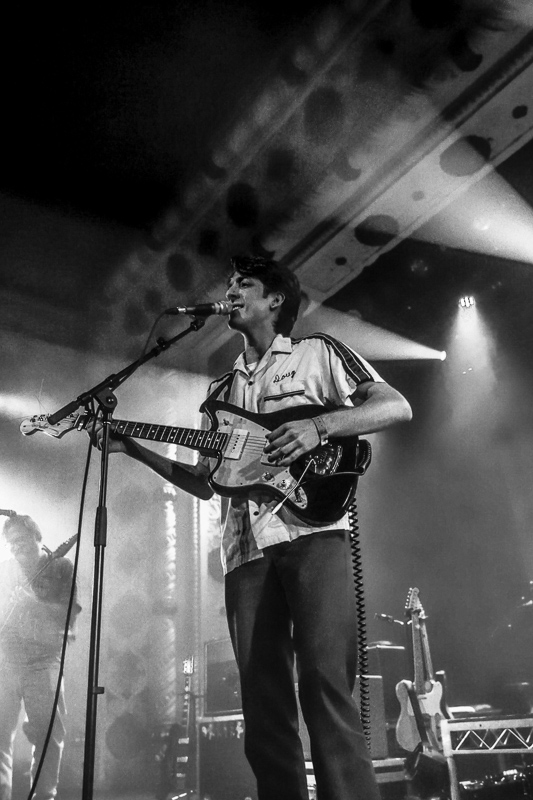 Next, the four-member group Greer further warmed up the crowd with Corbin on lead guitar, Josiah on vocals, Lucas on drums, and Seth on bass. Having only two songs released on streaming platforms — titled “Song For Me” and “Bittersweet” — the young band, which formed less than a year ago, has led a remarkable debut, creating music reminiscent of the indie phenom Rex Orange County. Both songs already brag over a million plays on Spotify, and many attendees, including myself, shouted all the lyrics to the two singles that were released earlier this year; they also included several unreleased songs in their set, appealing to their fanbase that was obviously present in the audience.

Because I am a fan myself, I was quite let down by Greer’s stage presence — or rather, the lack thereof. Going into the show, I was looking forward to hearing two of my favorite indie releases of the year played live. However, the band fell significantly short, and the considerable absence of enthusiasm and engagement made for a disappointing experience. Nevertheless, I did appreciate the spirit with which Seth performed, whipping his hair around like a rockstar as he plucked the bassline. By the end of Greer’s set, the crowd was eager for the main act of the night to start.

As The Regrettes made their way on stage, the audience roared in anticipation, and the first track of their latest album How Do You Love? played in the background. This first track — titled “Are You in Love? (Intro)” — is not a song, but rather, a spoken word piece about the nature of love. Nevertheless, the crowd, which was clearly full of diehard fans, recited the poetic verses while the quartet set up their instruments.

Suddenly, the punk-rock quartet from Los Angeles broke into song with one of their hits “California Friends,” immediately captivating the crowd with the opening line, “Will you come a little closer?” Audience members clearly knew this hit, excitedly chanting in response, “closer, closer.” As Night strutted across the stage holding her microphone, Genessa Gariano, Brooke Dickson, and Drew Thomsen rocked out on their instruments — the guitar, bass, and drums respectively — for the duration of the upbeat song. Despite its release as a single only last year, the hit has become a Regrettes classic and had Night gleefully jumping around alongside her fans.

With her guitar draped low below her waist, Night led the band through an impressive 18-track setlist (see the full setlist below), yet her energy never faltered. During “Dress Up,” Night proved she was in her element as she whipped her hair around and interacted with her band members on stage, playfully leaning in toward Dickson while strumming away on her electric guitar.

Although I overlooked this track on their latest album, “Go Love You” was one of my favorite songs of the night. In a call and response, Night encouraged the crowd to echo her: “You can’t love me, so go love you.” From the stage, Night leaned as close to her fans as possible, pointing the microphone toward the audience and cupping her ear to signal the crowd to yell louder. However, when the crowd was not loud enough by her standards, she jumped off stage without hesitation to stand against the crash barricade. Night proceeded to reach her hand out to her fans, certainly creating a memorable experience for some of her most ardent supporters in the front row of Metro.

Similarly, I did not think much of “Stop and Go” on my first listen, but the live rendition transformed my opinion of the song. During the chorus, Night gave the crowd specific instructions for the line, “Stop before we lose control.” Like the lyrics suggest, the audience froze before losing control, moshing wildly and dancing around. Often, artists direct the crowd without success, only mustering excitement in half of the audience. This case was different; it seemed that every person on the floor of Metro — in addition to the balcony — paused before headbanging wildly, a testament to Night’s sensational stage presence.

Toward the end of the night, Dickson introduced the cult-favorite “Seashore,” plucking the opening 13 notes that everyone instantly recognized. The fifth track on their debut album Feel Your Feelings Fool! and the band’s most popular release to date, “Seashore” is a commentary on criticism Night has received for being a young woman in the music industry. During the chorus, Night proudly flashed two middle fingers in the air as she shouted, “I’m like nobody else, so you can just go fuck yourself,” declaring her indifference for people who questioned her abilities. As an accomplished singer-songwriter on an international headline tour at barely 19 years old, Night has more than proven that she is uniquely talented. The Regrettes closed the night after two encores, leaving everyone in awe at their incredible performance.

While classified as punk rock, riot grrrl, and garage punk, The Regrettes have established a bold, modern take on the genre, developing a diverse discography ranging from empowering female anthems (like “Come Through”) to love songs that necessitate swaying with flashlights (such as “Pumpkin”). Furthermore, Night’s unique love and passion for music, which was evident through her continuously beaming smile, radiated through the entire venue, creating atmosphere to date. Without a single dull moment in their set, The Regrettes have proven that punk rock still has a place in music, even in 2019.