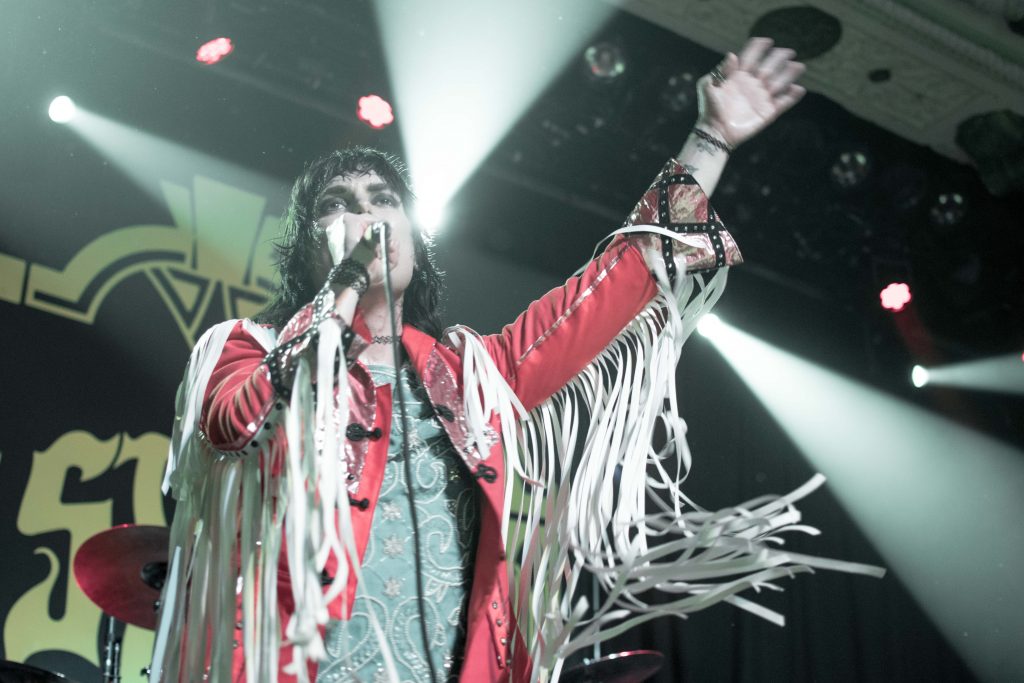 Writeup by Emily Pappin
Photos by Finn Hewes
May 9, 2018

Metro was packed on Wednesday, May 9, as people squeezed inside to get a good spot for The Struts. It was clear the audience was ready to take in the performance of this band and its frontman, Luke Spiller, known for putting on an energetic live showed aimed at “making rock-n-roll fun again.”

First up was Spirit Animal, a more indie-rock leaning group to listen to as attendees filtered in. Vocalist Steve Cooper was dressed in all white and working the small stage to his benefit, managing to captivate most of a crowd that initially wasn’t interested. They closed with a performance of their new release “YEAH!” out Friday, May 11. 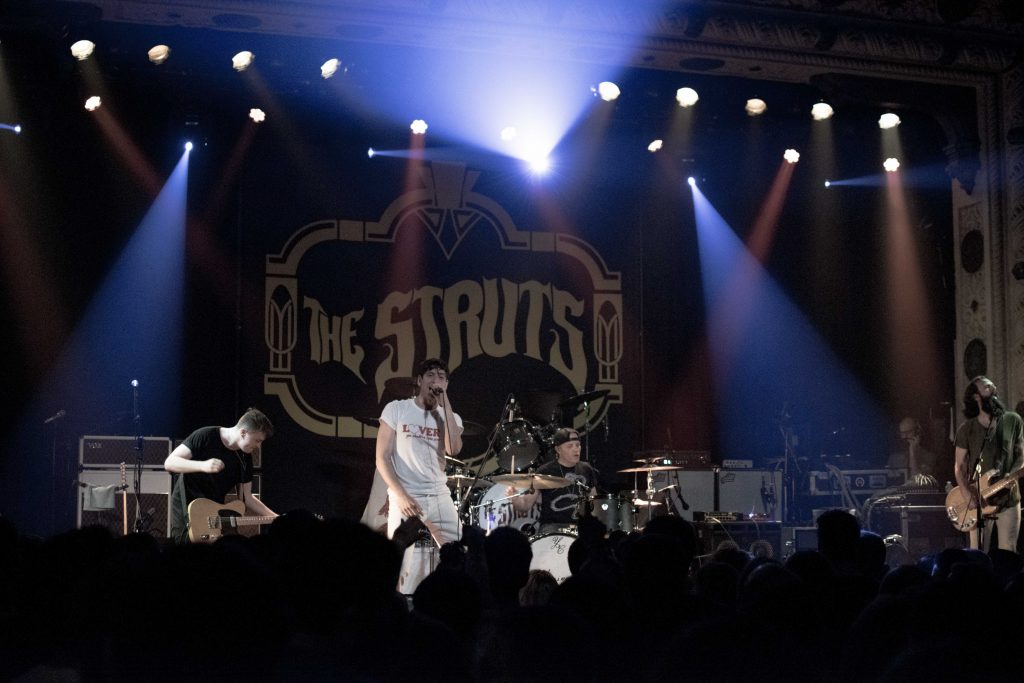 The second act of the night was The Glorious Sons, a rock band from Ontario, Canada. These guys had a much heavier sound than Spirit Animal, with gritty instruments and the thick, strong vocals of Brett Emmons. Emmons’ long hair became a focal point as it constantly swung in his face and emphasized his headbanging throughout their set.

Emmons’ movements around the stage were erratic and alarming at times, as he grabbed at guitarist and his brother Jay Emmons and at one point threw his mic stand, which Jay caught and set to the side. A cover of The Rolling Stones’ “Gimme Shelter” excited the audience, and the momentum kept going through the end of The Glorious Sons’ time on stage. In a similar vein to The Struts, The Glorious Sons seem to pull inspiration from the nasty old-school rock bands of the past few decades. 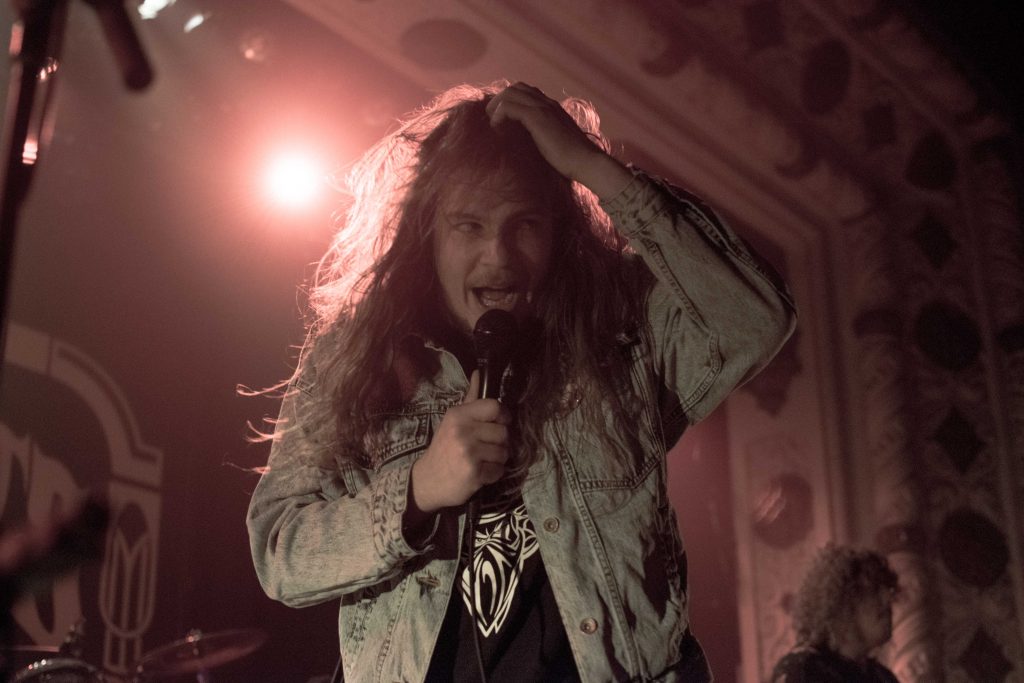 Finally, it was time for the headliner–the lights dropped, and a dramatic voiceover began asking the audience if they were ready as the members of The Struts took the stage–all except for Spiller. He made a late entrance in a loud orange suited covered in massive fringe, with his hair and makeup done in dramatic fashion as always. They opened with “Put Your Hands Up,” a single from 2016, before getting into songs off their 2016 album Everybody Wants. Spiller fulfilled all expectations, asking “Are you ready for one of the greatest nights of your lives?” and telling everyone in attendance “If you’re not ready to let yourselves go, you may as well fuck off!” 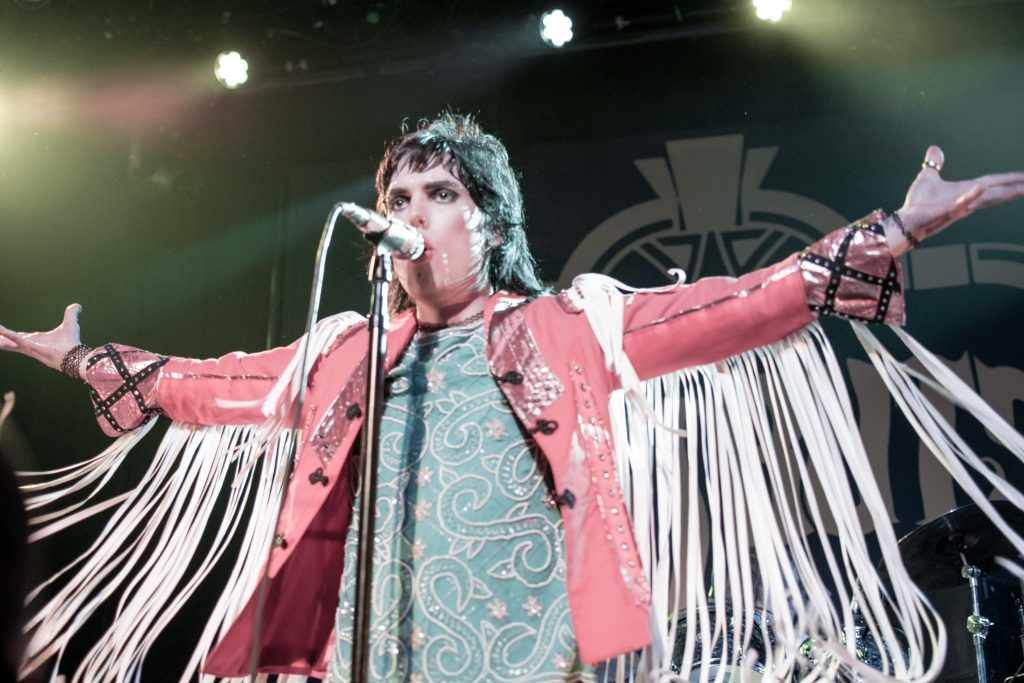 After “The Ol’ Switcheroo” it’s announced that they’ve finished their second album, and the crowd goes wild as Spiller says they’re about to perform a brand new song, seemingly titled “Primadonna Like Me.” Throughout the set, Spiller had the crowd wrapped around his finger, getting everyone to sing along at his command and instructing different sides of the stage and balcony to sing different parts at different times.

Around the middle of the show, The Struts played a surprise cover of Bruce Springsteen’s “Dancing in the Dark” and afterward invited a woman with a tattoo dedicated to the band up on stage with them. After “Could Have Been Me” came the fake exit as Spiller runs off stage, and guitarist Adam Slack was finally allowed a moment in the spotlight–he had been killing it all night, and finally got the chance for the audience to appreciate his insane talent.

Spiller eventually came back out in a completely new outlandish outfit for their finale, consisting of striped pants, a sequined shirt and jacket, and a large sequined top hat with a long hanging ribbon tied around it–also covered in oversized sequins. The closing song was “Where Did She Go” and Spiller pulled off one more trick with the audience, asking everyone to be his human fireworks. He got the crowd to all crouch down, and nearly everyone obeyed, staying down as Spiller continued singing and finally, called for an explosion–and, again, everyone listened, jumping up and beginning to dance. 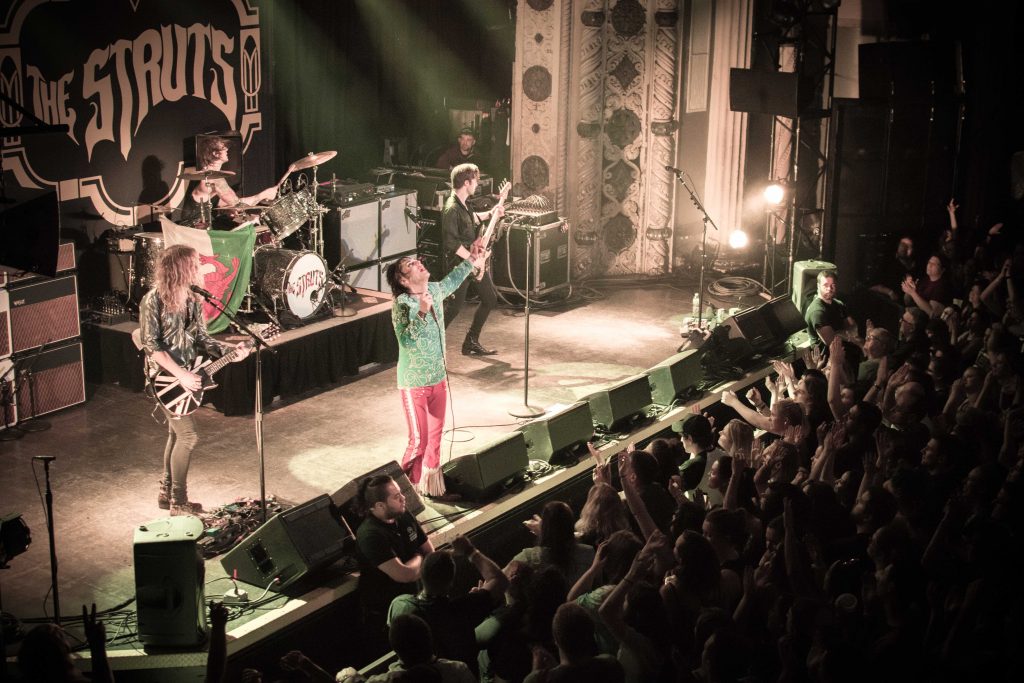 After the end of “Where Did She Go” Spiller and the rest of the band took a moment to bask in the cheers of the audience, having truly succeeded in getting everyone to loosen up and let go for a night of fun rock music. Golden lights came on and the four members lined up to take a bow and throw picks and towels out to the audience, after Spiller took a moment to dramatically say: “Chicago! Remember the name: The Struts.”