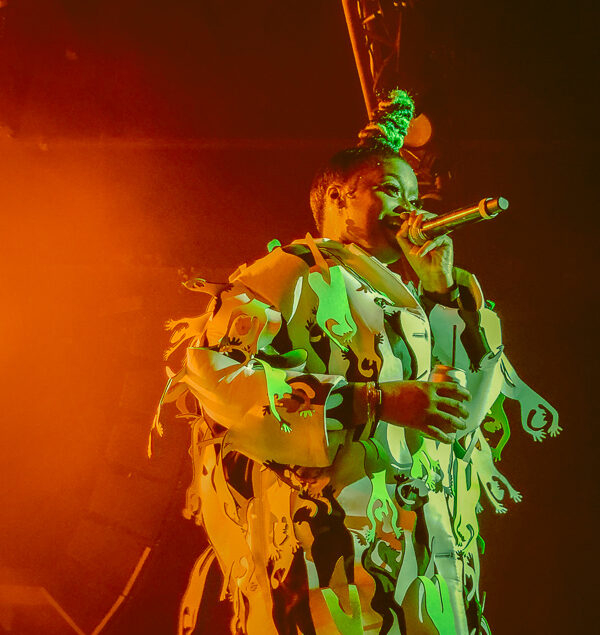 A tower of human body parts that have been severed from a mannequin that are connected to alien-like, plastic ligaments either belong in a contemporary art exhibit or on the stage of a Tierra Whack concert. I recently attended the latter.

With her debut album’s release in 2018 and as a member of XXL’s 2019 Freshman Class, Whack has quickly become one of the biggest names in hip-hop today. While originally from Philadelphia, tickets quickly sold out for her highly-anticipated return to Chicago for Red Bull’s annual music festival.

To open the night, Chicago native Valee performed a short set. Valee is clearly a talented artist, having signed to Kanye West’s infamous record label GOOD Music. However, his complete absence of stage presence made for an extremely underwhelming set, and his low energy rippled through the crowd. Even his hype man had more energy and enthusiasm for his performance than he, making his live performance lukewarm, at best.

With no warning, Whack’s DJ Zach — a scrawny, tattooed white guy — rushed the stage in an animal mask and prepared the crowd for Whack’s set, which began with “Only Child,” a crowd favorite. If you are a fan of Whack, you likely know visuals are a critical element to fully understanding and appreciating her music. From her outfit — a white suit fully adorned with neon green silhouettes — to the eccentric stage decor, Tierra Whack was truly in Whack World, where she could proudly be her zany and carefree self.

Whack truly proved she is “not your average girl” throughout this performance. During her set, I lost count of the number of people who jumped over the crash barricade to hop onstage (per Whack’s invitation) whether to freestyle, perform their favorite song, or receive a huge “Happy Birthday” from the entire venue.

In my opinion, an artist cannot fake crowd engagement, as it is extremely transparent when an artist is forcing their interactions with the audience. However, Whack’s exchanges with her fans never felt insincere or just for show; in contrast, she seemed to be particularly deliberate about ensuring her fans felt appreciated. For example, Whack initially invited a fan onstage to perform “Hungry Hippo,” but she noticed the fan was wearing her outfit from her “Fuck Off” music video; without hesitation, she ordered Zach to play “Fuck Off,” despite having already performed the song earlier in her set.

It is impossible for me to verbalize why Whack World was the most fun and impressive concert I have ever attended. It might have been Whack’s easy smile or her sense of humor when she accidentally fell off stage after just the second song of the night. Or, maybe it was her endurance and ability to continue the rest of the show despite this fall. It could also have been her signature call-and-response game, where she led the audience in a series of quirky chants and silly noises. In order to truly understand her irreplaceable, charismatic personality — that arguably makes her the most unique artist in hip-hop right now — you must attend a Tierra Whack concert.

Whether she is rapping about her favorite childhood games or the loss of a close friend, Tierra Whack somehow maintains the standard rowdiness and energy of a hip-hop concert, with the crowd moshing so wildly that I even lost an earring during one of the songs. From her opener, “Only Child” — an alternative hip-hop track featuring a glossy yet sassy hook — to her last song of the night, “Unemployed” — a bitey rap that shows off her bars — Whack demonstrated her range and raw talent. 2020 is bound to be another huge year for Tierra Whack, as she continues to be one of the most refreshing and creative voices in modern hip-hop.