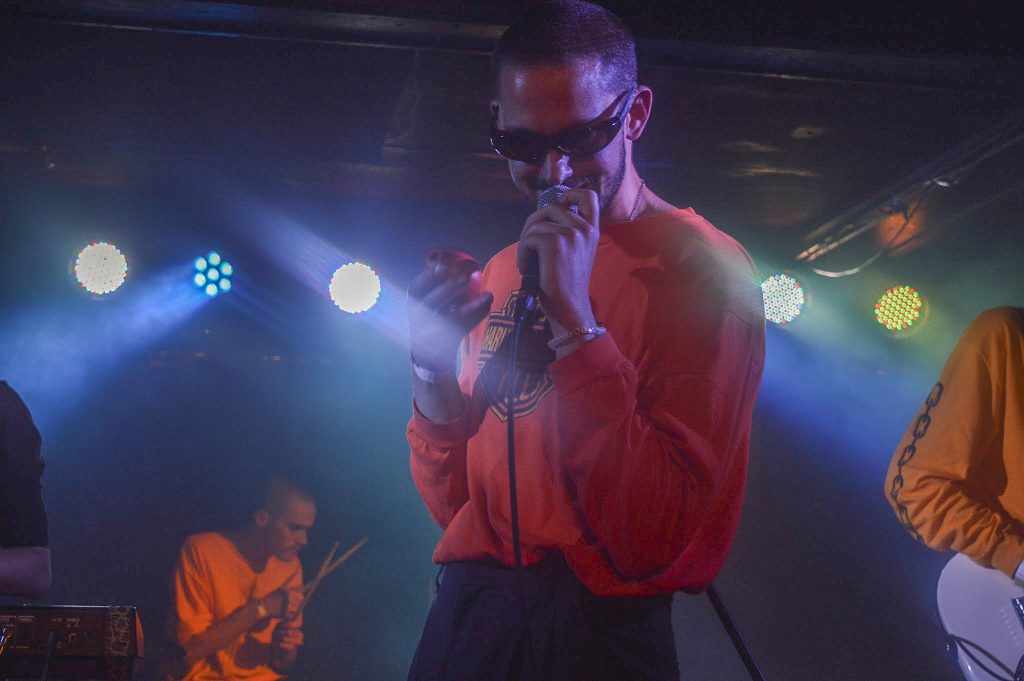 Write-Up and Interview by Ellise Shafer

It seemed that all of Chicago’s hippest teens gathered in Subterranean on Monday, April 17 to hear Triathalon’s bedroom-pop sound performed live. Although the band had already been touring with former singer of The Walters, L. Martin, they were joined by local Chicago acts Uma Bloo and Morgan Powers.

Morgan Powers started off the show with just her guitar and a stool, complementing simple chords with delicate strumming. She played the role of singer-songwriter perfectly and delivered her music in an extremely mature way, although she appeared to still be in high school. Powers was completely humble and adorable, and when she smiled to introduce her next song, the crowd did too. Although they all carried a similar chord progression and theme, the five songs she played were reminiscent of Jack Johnson or Colbie Caillat.

The vibe of the night then did a complete 180 with Uma Bloo. Looking like a sparkly fairy godmother in her pink vintage dress and white kitten heels, lead singer Molly Madden delivered low vocals and heavy chords from a guitar covered in silver glitter. Backed up by only a bassist and drummer, the trio delivered hard-hitting blues rock a la Courtney Barnett and Lucy Dacus. Toward the end of their set, Madden played two stripped-down songs by herself, and then called her band back on to finish it off, playing a song with an immense build that clearly showed off their talent. After playing the last notes, Madden and her bassist finished with a high five, which was oh-so-cute. 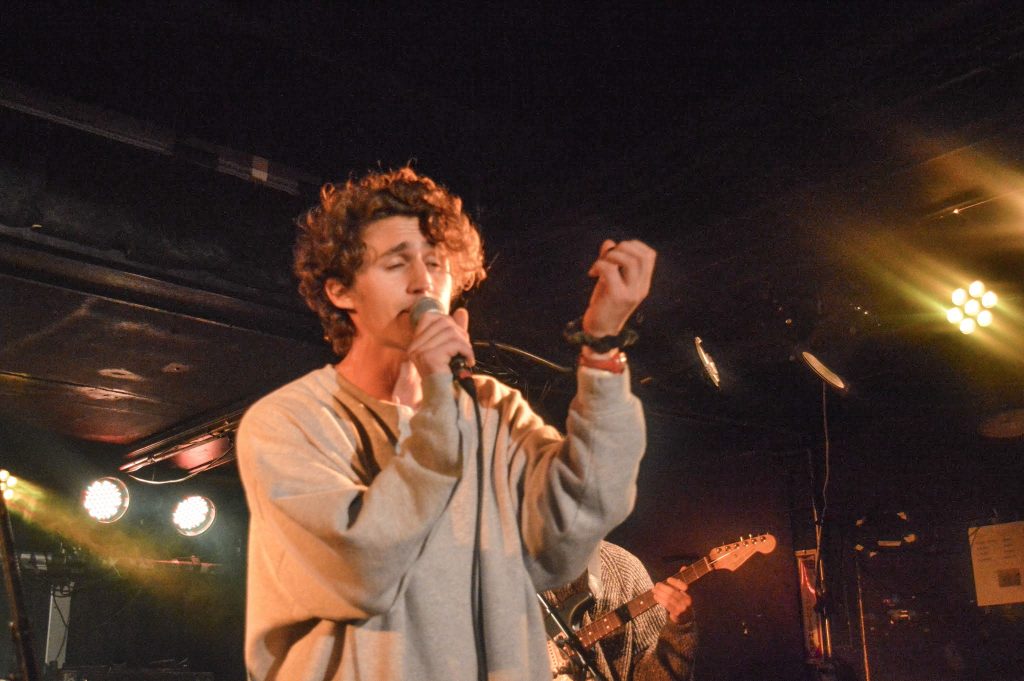 Next up was L.Martin, Luke Olson of The Walters’ new solo project. Having followed The Walters since their conception and being able to get to know Luke over the years, I was eager to see him interact with his new band and hear his music live. This was also Luke’s first solo show in Chicago, where The Walters spent most of their time, and Luke was quick to point out on social media that his parents and other family and friends would be in attendance. In short: it was a big night for him. It was immediately apparent the love and support that Luke has from his fans – which he paid back by shaking their hands and chatting with them as he was setting up. From the get-go, it was obvious that Luke’s dynamic with his band was impeccable. Comprised of friends and his little brother Anthony, Luke seemed extremely comfortable on stage and had no hesitations doing wild dance moves and interacting with the band while performing. Overall, the instrumentals were great, including a trombonist and two different keyboards as well as bass and drums. The audience danced all through the set to his latest releases, “Skipping Rocks” and “Flowers,” and swayed to softer ballad “Blue Skies.” During an instrumental break, Luke took time to introduce his fellow band members and relay the meaning of the night’s show. He shouted out his parents, saying that he had waited for this moment all tour: “I know they’re so fucking proud. And because of them, man, I believed in myself. And Anthony started to believe in himself and we said WE CAN DO THIS TOGETHER! WE CAN DO THIS TOGETHER! And I said to my mom and dad, that the smile on their faces is just gonna grow bigger when they watch Luke [Henry] play guitar because he loves to play guitar! Because he really loves to play! And then they’ll watch Chris play – play that trombone, Chris! You freaking love it!” Luke then ran over to his brother, hugged him and hung onto his back and then broke out into a fit of dance moves, ending it all by taking off his shirt. You kind of had to be there, but it was so wholesome – only to be topped by Luke running off stage to hug his mom after playing their last song, “Dirty Sheets.” Considering Luke a friend, I was incredibly proud to see him flourish in this way, and couldn’t help myself from tearing up a little. 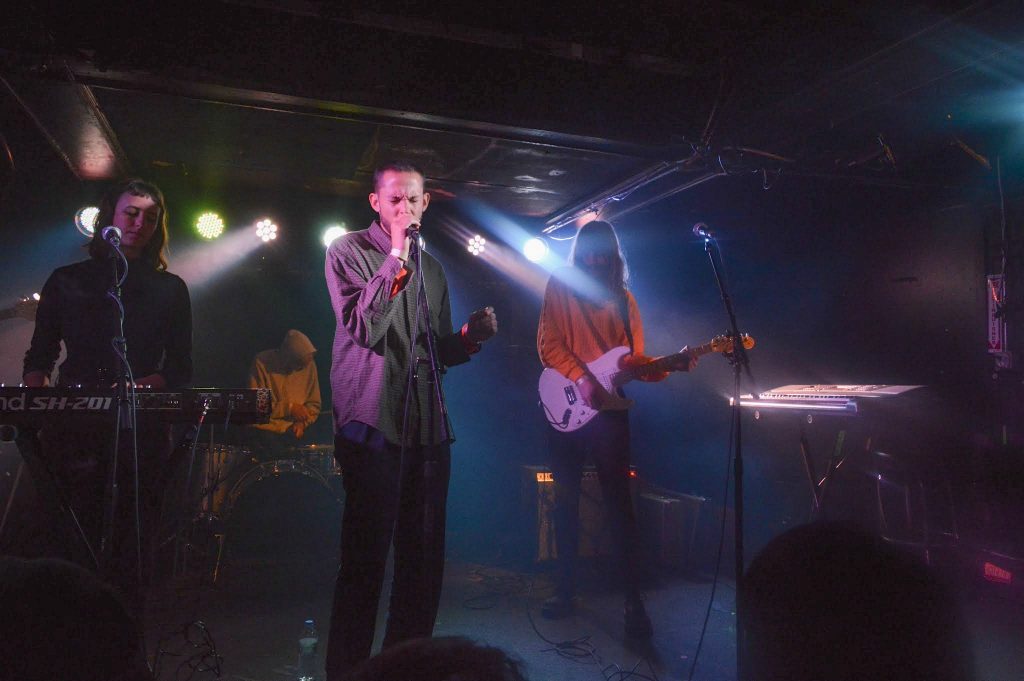 Finally, it was time for Triathalon to take the stage. Upon stepping on stage, it was clear that they had taken the idea of a band having a certain “look” to a whole new level. All four male members of the group sported mustaches, and three of them were wearing the band’s merch. Standing out was Kristina Moore, who played keyboard and sung in harmony with lead singer Adam Intrator, creating their dreamy sound. From the beginning, Triathalon radiated good vibes, mostly playing songs from their latest album Online, released Feb. 16. However, they did pay homage to their earlier work with a fantastic performance of “Take It Easy,” off of 2015’s Nothing Bothers Me. Intrator’s performance style consisted of periodic posing while staring into the audience’s soul, which got some giggles from the crowd at first, but was honestly very entertaining and fit with the rhythms of their music. Said rhythms were provided by drummer Chad Chilton, whose performance was especially impressive, leaning over his set laboriously in order to keep up with the staccato beats. 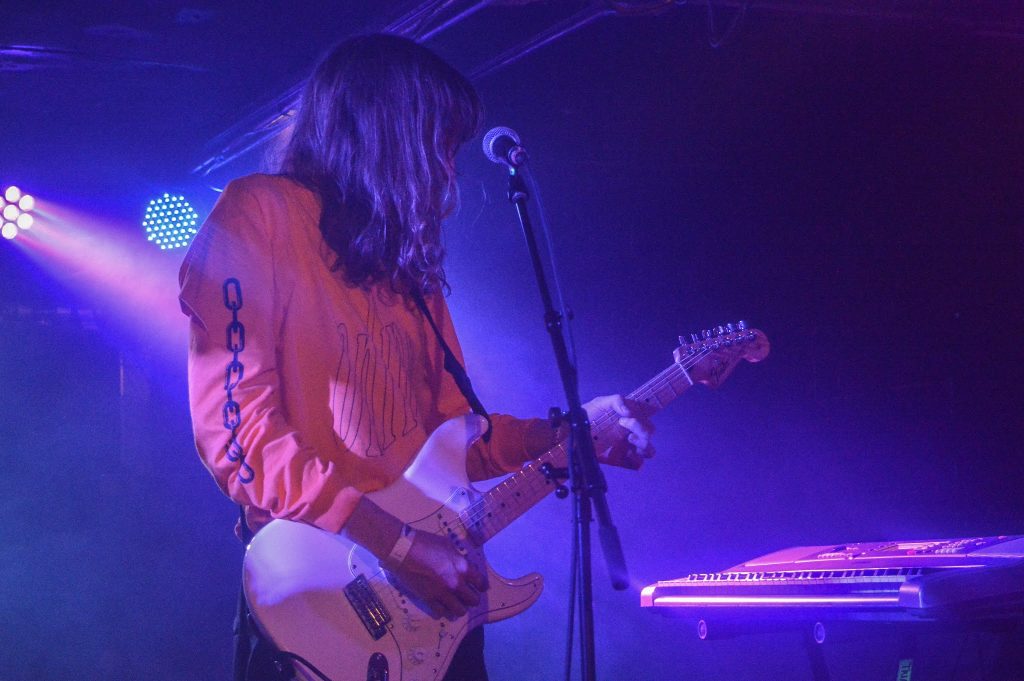 Intrator’s falsetto and Moore’s head voice mixed together beautifully through the set, most notably in “True” and “Couch.” Being from Georgia, the band brought with them a bit of southern charm, with Intrator thanking the audience after almost every song and even giving the crowd a one-song warning before he stage dove. To top it all off, Intrator donned a pair of sport sunglasses during one of their last songs and stood completely still while shaking a spherical maraca, which was hilarious. In short, there is no doubt that the hipster teens in attendance left Subterranean feeling loose and a little dazed – albeit in the best way.

I also got the chance to interview lead vocalist Adam Intrator about Triathalon’s changing sound, the meaning behind their name and weed. Read on…

ES: You guys released your first album, Lo-Tide, in 2014. How did the band get together and what was making that record like?

AI: We all met in college. Things just happened naturally from there… more shows, less college.
Making Lo-Tide was pretty chill actually. We all moved in together after school ended and ended up recording the whole album in our house. We would just hang out all day and take turns tracking our parts in the living room.

ES: How has your sound changed from then to now with Online? What have been your major influences throughout the process?

AI: It’s a lot less guitar and we’ve managed to simplify our band dynamics. Honestly just getting older and moving out of Georgia really helped shift our sound naturally.

AI: It was really just an accident. I just thought that’s how it was spelled. The name was actually from a screenplay I was working on at the time. I just thought it was cool.

ES: You’ve just finished the first leg of your tour with Inner Wave and L.Martin. How were those shows? What’s the dynamic like between all of you?

AI: Every show was amazing. This has been the best tour yet. And everyone in all the bands are really chill. A lot of weed and a lot of jokes. Mostly weed.

ES: What’s the craziest thing that has happened to you on tour so far? On stage or off, perhaps an odd fan gift or encounter?

AI: Probably a group of kids who followed us from Atlanta to Austin who just discovered our music like that month.

ES: Just from looking at your Twitter, you get a lot of mentions about people smoking weed while listening to your music/at your shows. Did you set out to make music that would be good to smoke to or did it just kind of end up that way? How do you feel about this?

AI: Not really. I feel like people just like being vocal about getting high to our music. It’s chill. Weed is chill. Music is chill. They go together.

ES: What’s your take on the current influx of “bedroom pop”/ “dream pop” that we’re seeing right now? Do you consider yourselves pioneers in this arena or did you take influence from other current artists?

AI: It’s been a long time coming I think. We saw it begin with Beach Fossils’ first record and then it really opened up opportunities for other artists with limited resources to gain the confidence and momentum to release garage band styled recordings. In my opinion it’s more about everyone’s strong melodies and less about how it sounds. And “poor quality music” has its own charming aesthetic and it’s really working for everyone. But I don’t see us as pioneers in that area. I just like writing in my bedroom and still love recording on my 2009 Macbook. 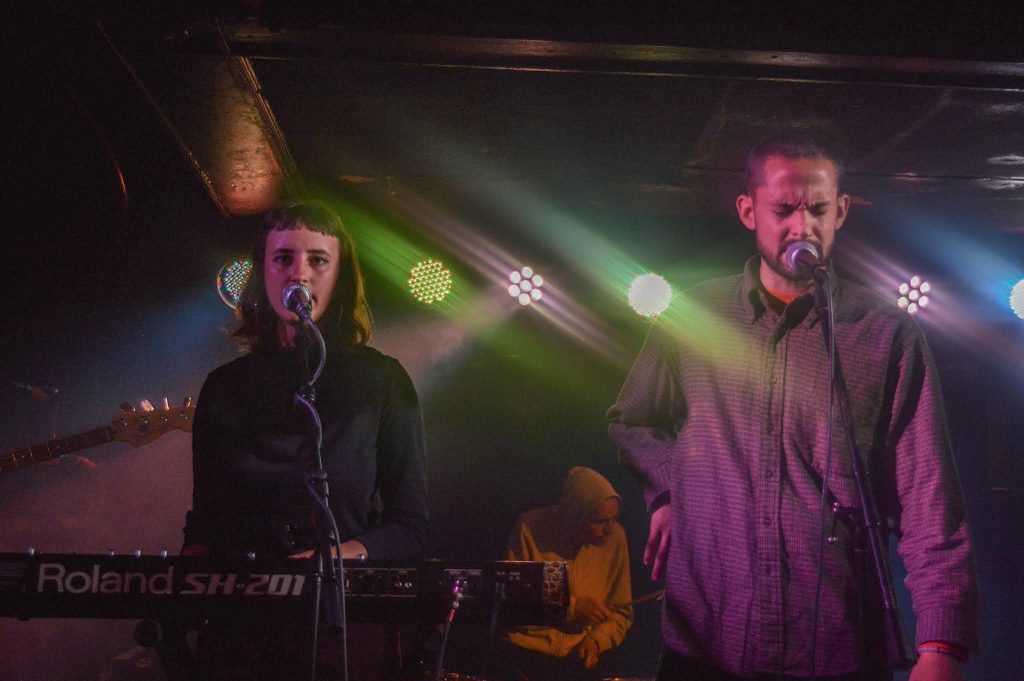