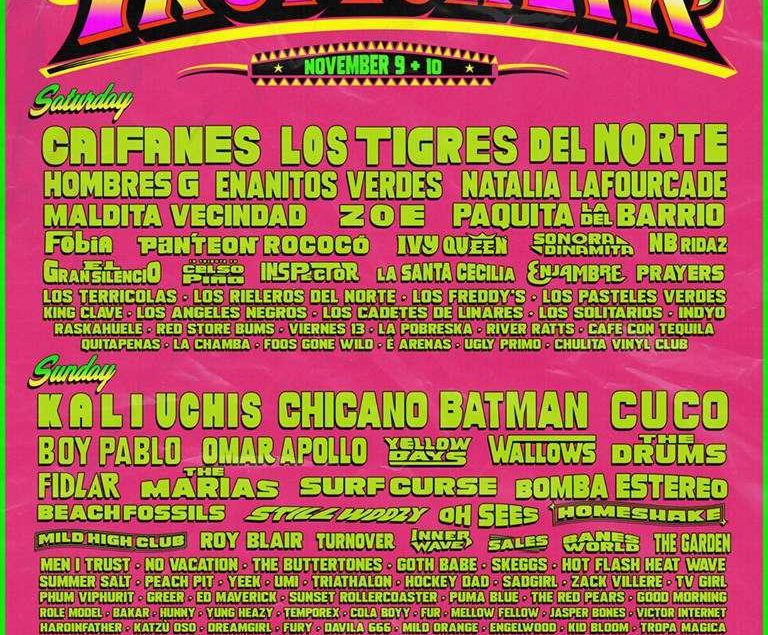 This November, Tropicália Music and Taco Festival will return for its third year and this time, it will be bigger than ever —literally. To accommodate a larger crowd, Goldenvoice announced that the festival, which will take place November 9-10, will relocate from Pico Rivera Sports Arena to Fairplex in Pomona, Calif., and it’s not hard to see why. Tropicália is LA at its best, with a bill boasting over 100 artists as well as free tacos from the area’s best taquerías.

Tropicália’s 2019 lineup demonstrates a renewed commitment to showcasing Latinx voices in the world of music. All of the festival’s top names have some sort of Hispanic descent, whether it be Kali Uchis, Chicano Batman, Cuco or Los Tigres del Norte. Saturday mainly focuses on the vibrant Latinx music scene in Los Angeles and beyond, while the ever-popular “indie- rock” genre, which has ties to SoCal due to its carefree aesthetic, dominates Sunday’s lineup.

With Tropicália just weeks away, here are five artists for festivalgoers to keep an eye on.

The Undercover Dream Lovers may find themselves on the bottom of Sunday’s bill, but they are not to be overlooked. Brooklynite Matt Koenig has parlayed his mastery of ethereal synthesizers and delicate falsetto notes into serious success on streaming services. The 2017 single “Come Home” largely put The Undercover Dream Lovers on the map, earning placement on popular Spotify playlists like “Feel Good Indie Rock” and “Indie Rock Road Trip,” both of which have 500,000+ followers. Making his first appearance at Tropicália, Koenig will look to take his audience to a faraway place with his escapist brand of dream pop.

This summer, the Buttertones experienced a serious setback when they had to cancel all of their summer 2019 tour dates as drummer Modesto Cobián recovered from a corneal infection. Now that “Cobi” has a new cornea, the Buttertones are back in action, with Tropicália serving as their first festival performance since the health scare.

For an act that has recently tried to diversify their style, the Buttertones’ lead singer Richard Araiza has been everything the band could ask for. Araiza truly blossoms on 2018’s Midnight in a Moonless Dream, the Buttertones’ most experimental project to date. In the course of one album, he goes from showing off some Clash-like vocals on the grungy “Baby C4” to crooning some whispery low notes on the somber “Eros,” all the while not abandoning his signature ‘50s- diner timbre and fondness for annunciation. With Araiza leading the way and Cobi healthy once again, look for the Buttertones’ return to Tropicália to be as smooth as butter.

While many groups on Saturday’s slate such as Hombres G, Sonora Dinamita and Los Freddy’s have been making music together for decades, La Santa Cecilia provides a comparatively new perspective. The LA-based group’s 2013 release Treinta Días won a Grammy for Best Latin Rock Album, buoyed by the tranquil, yet powerful “ICE El Hielo,” featuring lyrical barbs on how the government agency has unjustly ripped Latinx families apart. La Santa Cecilia has some of the most diverse range of influences of any band out there right now, singing in English and Spanish and drawing on elements of bossa nova, cumbia, contemporary rock and jazz in their composition. Although the band is based in Los Angeles, many of their fans reside outside the US, with large numbers in Mexico and Chile. Look for powerhouse lead vocalist Marisol Hernandez to capture LA hearts in La Santa Cecilia’s first Tropicália appearance.

Cumbia music has taken on many forms throughout Latin America since its inception in Colombia, with influences from Africa, Europe and indigenous South America. A notable Peruvian offshoot of cumbia, known as chicha, has made its way to Los Angeles in large part due to LA-based band La Chamba. The band got a taste of mainstream exposure when lead singer Jason Zepeda spoke on NPR’s podcast “Latino USA” in 2018. Zepeda discussed how La Chamba hopes to revive interest in chicha in LA by paying homage to 1970s chicha classics with their 2017 debut album Ecos de la Selva. Their discography mirrors what you might hear in a Caribbean cabana, with bongo drums, guiros and cowbell anchoring bouncy guitar riffs. With musically rich songs like “Cariñito” and “Por Ahí,” La Chamba’s first Tropicália appearance should inspire at least a few festivalgoers to embrace chicha by Saturday’s close.

Los Angeles’ large Mexican population has contributed to the endured popularity of ska mexicano in LA. Many bands with ska and reggae influences native to the city appear on the Tropicália bill, one of them being Raskahuele, who will make their Tropicália debut this year. The band’s 15th year together carried success for the 9-piece ska group, as they lined up a support slot for Los Cafres at Anaheim’s House of Blues. Raskahuele’s laid-back reggae sound complete with ample sax solos should make for a good vibe check early Saturday afternoon.