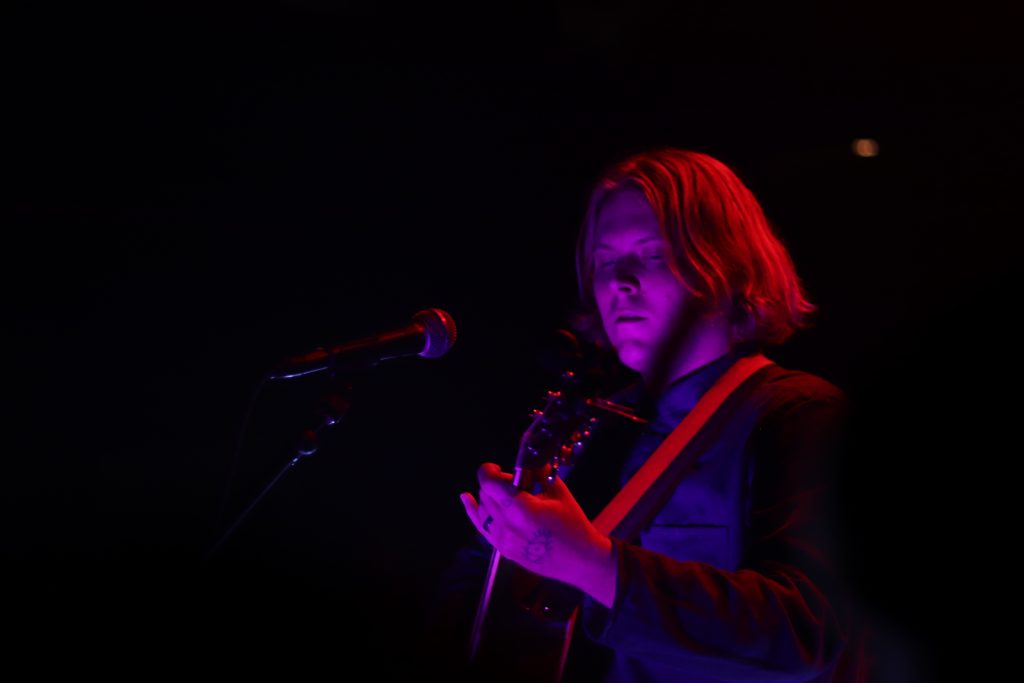 Approximately seven months ago, San Francisco-based garage and psychedelic rocker Ty Segall played a show at the Vic Theater that easily remains a contender for the most chaotic, electrifying show I’ve ever seen. When it was announced that he was playing a Thalia Hall show, I knew I had to relive the experience. In all of my eager anticipation, I glossed over a few key details. First, it was a solo, acoustic show. It was also an “in the round” show, meaning the artist plays on a slightly elevated platform surrounded on all sides by audience. I had no idea when I signed up that Ty Segall–the frantic, cacophonous shredder–would pack up his electric guitar, send home his band, and set up in the middle of the audience while equipped with only a highly decorated acoustic guitar, a mic, and a glass of red wine weighing down his setlist. Has he gone soft?

In truth, no, because he has had a soft, tender side for a while. Segall has an extensive body of mostly acoustic ballads sprinkled into his latest works, alongside his 2013 album, the psychedelic folk, predominantly acoustic Sleeper. These songs, with a couple exceptions, rarely make it into his live shows, which is unfortunate considering they’re some of his most affecting, beautiful songs and a perfect balance to his more raucous numbers. With the chance to hear some of Segall’s less played cuts, I approached this Friday night show with renewed enthusiasm. 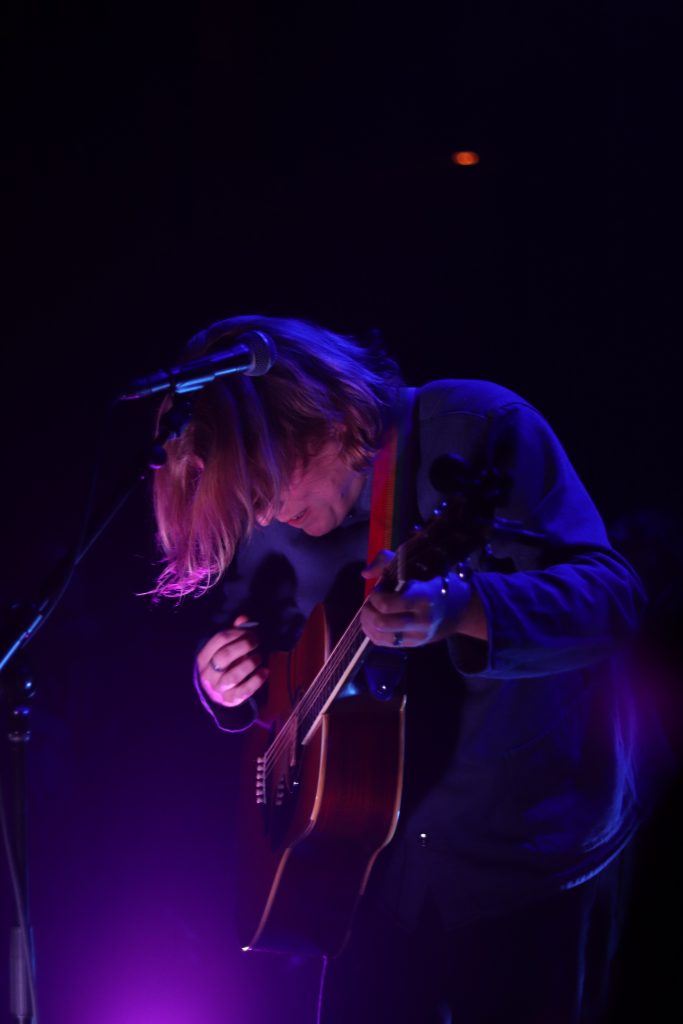 But first, William Tyler. Hailing from Nashville, the show’s opener outdid Segall in minimalism—while he occasionally spoke through the mic, all of his songs were instrumentals played on just his acoustic guitar. His songs, each using a different unconventional tuning, were dynamic; continuously meandering and changing form, swelling and diminishing throughout their often six- to eight-minute running times. A fingerpicker in the vein of American primitive guitarists like John Fahey, all ten fingers were at work at most times, composing odd, intriguing chord shapes or dexterously alternating between strings. While many opening acts have a difficult time maintaining their audience’s attention, even with a full band, William Tyler, his head constantly engaged in an impassioned bob, was the center of attention. Conversation occasionally picked up between songs but the crowd, for the most part, remained hushed, apart from a pair of backward-baseball cap-donning Segall bros who never missed an opportunity to bellow their approval at Tyler’s most intimate and emotive moments—“Fuck it up Willy!” I knew there was something missing when I listened to Modern Country, Tyler’s latest album, but these guys showed me what it was. 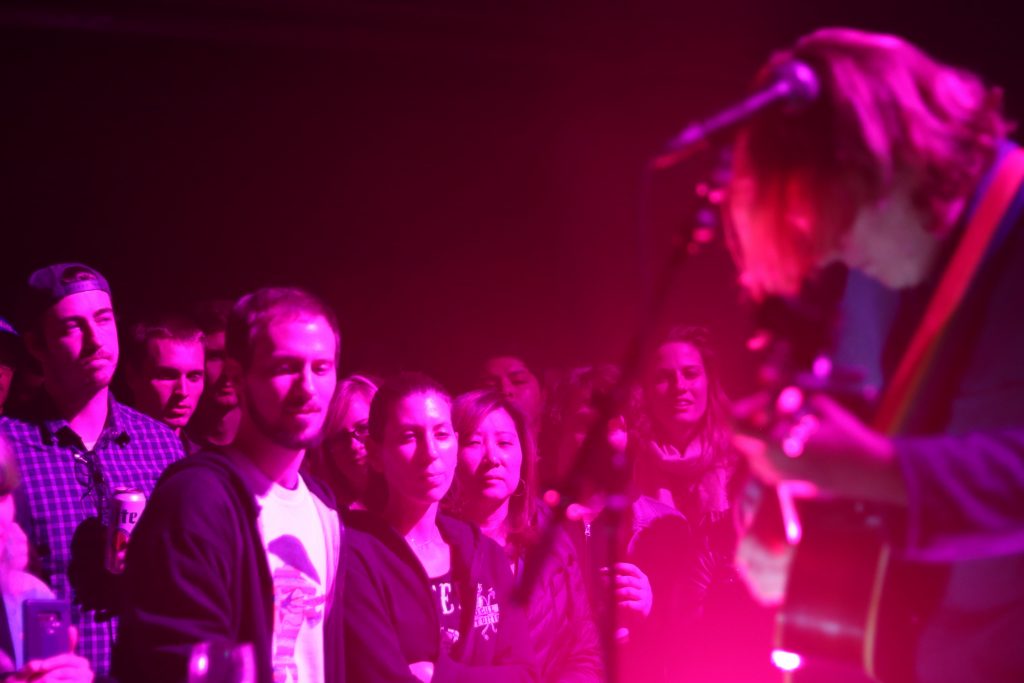 And then Ty came on, matter-of-factly plopping down his wine glass paperweight and launching into “Crazy,” a song from the aforementioned Sleeper. His set list included a number of rarely played, originally acoustic songs, but also stripped down versions of some of his usually fuzzed out rockers and a series of covers taken from his new covers album Hot Fudge. There are a couple notable differences between electric and acoustic Ty, the most pronounced being the emphasis on his voice in the acoustic setting. At the Vic, his voice at most times was just one contributing factor to the all-consuming wall of noise; here, without all of the instrumental distraction, his dynamic range was on full display. Songs like “Warm Hands (Freedom Returned),” a 10+ minute, proggy epic off of his most recent self-titled album featured a throaty, unhinged growl; his natural, reedy Lennon-esque voice; and a demented yelp peppered in here and there. He also engaged more with the audience, taking full advantage of the “in the round” format and moving his mic to face different parts of the crowd. At one point he dove into an impromptu Q&A with one of the bros about his dog, the subject of his track “Fanny Dog.” Apparently, Fanny is a dachshund.

There is one similarity between the two settings, whether it’s an amplified full band show or a stripped-down acoustic set: a Ty Segall show is neither tame nor predictable. Songs still devolved into spazzy technical freakouts, Ty Segall still battered the strings of his guitar with such ferocity that it’s a surprise they survived the show intact, and bodies still moved, albeit with less intense contact than in his full band shows. Though it was a shame that as a solo performer he wasn’t able to recreate some of the intricate and beautiful full band arrangements of his acoustic songs, he did as much as one can conceivably do with the limiting format, resulting in an entertaining show that rarely felt like a diluted version of his act.