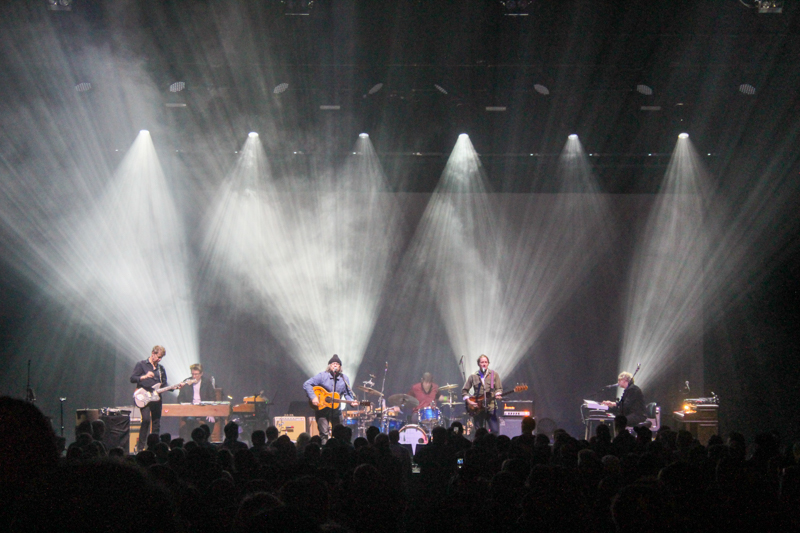 My first boyfriend gave me a mix CD that started with a Wilco song. We were fifteen, had only been dating a week, and it was Valentine’s day. Wilco is a band that resonates with memories for people of all ages, and that quality shined through at the first of their five Wilco Winterlude shows in Chicago.

Winterlude was a show aiming to kick-off the band’s 2020 tour of their newest release, Ode to Joy. Before Wilco could kick-off their kick-off show, Robyn Hitchcock performed a short set. Dressed in a polka-dot blouse, Hitchcock cracked jokes about his age and played some of his classics. While Hitchcock was performing most of the theater was empty, and of the people who were there, most were talking while he played. This made his set seem bland and not worth an audience member’s time. A few songs away from leaving the stage, Hitchcock played “Madonna of the Wasps” which got a few cheers from the audience. Hitchcock’s opening performance felt like a warm-up lap, especially compared to when he returned onstage later in the night to perform with Wilco themselves.

Without much wait, the unassuming Wilco walked out on stage in the dimmed lights. A few moments of silence, the crowd’s anticipation radiating, then the opening drum beats to “Bright Leaves” began. Jeff Tweedy bowed his beanie-clad head as he sang the first few lines of the intense ballad. The group didn’t catch the crowd’s attention until the third song, “I Am Trying to Break Your Heart.” The lights on stage were beaming blue, illuminating the massive crowd that was singing along to every single word of the old favorite. This continued intermixing of songs from the new album and crowd-pleasers from old works continued all night long.

Around the eighth song, “Hummingbird,” it became obvious that the new album was not why people were there. They wanted the old stuff; they wanted the sing-alongs. It can be hard for any band that’s been around for a while to make new music that is well received and able to be performed for crowds. Wilco, just like any successful band, is facing that problem as well. Instead of giving into everything the crowd wanted to hear, Jeff Tweedy and his bandmates stood their ground and tried playing songs from the new album. I give them credit for it because they didn’t just try to play the new songs, but they sounded good playing the new songs.

The show itself was long, twenty-eight songs total, but it didn’t feel that way. Tweedy kept the crowd engaged with his dry Chicago humor, addressing the crowd with, “Let’s get this party started with some mid-tempo rock,” or announcing that the lead guitarist needed to sit down for a break after his solo. In addition to Tweedy’s humor, the band made their show interesting by changing guitars almost every song, using captivating visuals, and even incorporating Robyn Hitchcock into their encore performance where he was able to hit his stride.

Of all the songs performed, the crowd was the most into “Misunderstood,” a song hailing from Wilco’s second studio album Being There. Tweedy was fully leaned over the microphone deadpan staring at the crowd. As they approached the last few words of the song, the band chose to extend the ending, playing the hallowing “Nothing” over and over and over again, beating the meaning of the song, and what sometimes seems like the meaning of life, into everyone’s head.

From this first glimpse of the 2020 tour, it is obvious that crowds will fill arenas to watch Wilco. Their relatable lyrics, raw ability, and authenticity make them one of the best alternative rock bands out there today. What will be interesting to see is if the crowds become more receptive to the newer songs from Ode to Joy that Wilco has to offer.