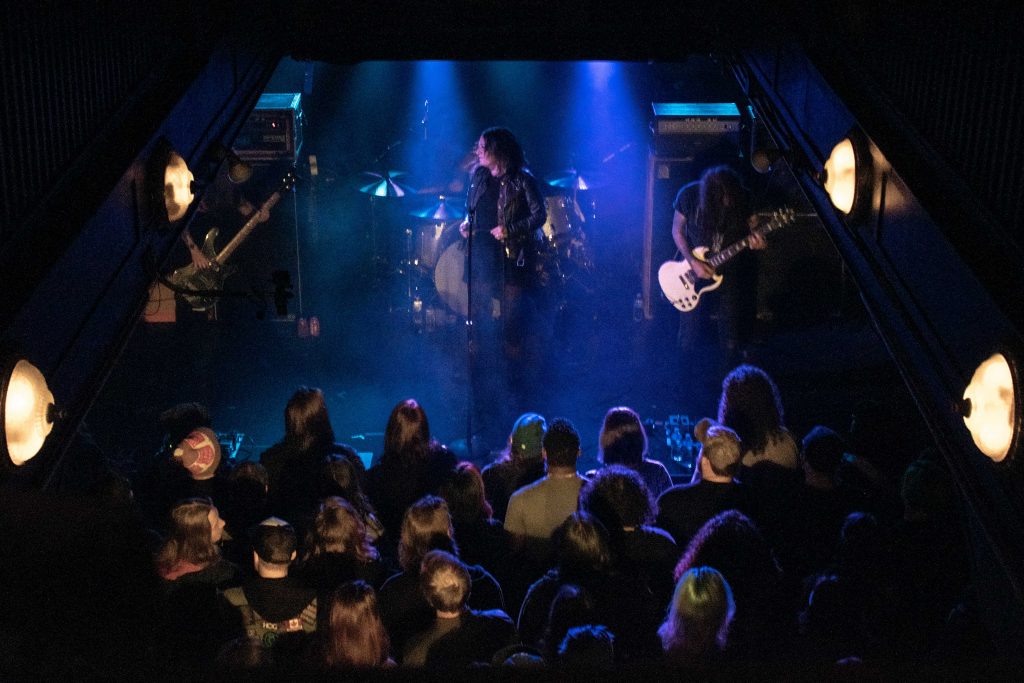 As Satan’s Satyrs took the stage Wednesday night, the mostly middle-aged crowd filling out the cramped, beer-soaked room at Subterranean seemed largely uninterested. Seeing jackets, shirts, and beanies in support of the main attraction of the night all around me, it was clear that the four-piece would have to earn the crowd’s attention despite their history of collaboration with the fellow Relapse Records signees Windhand. 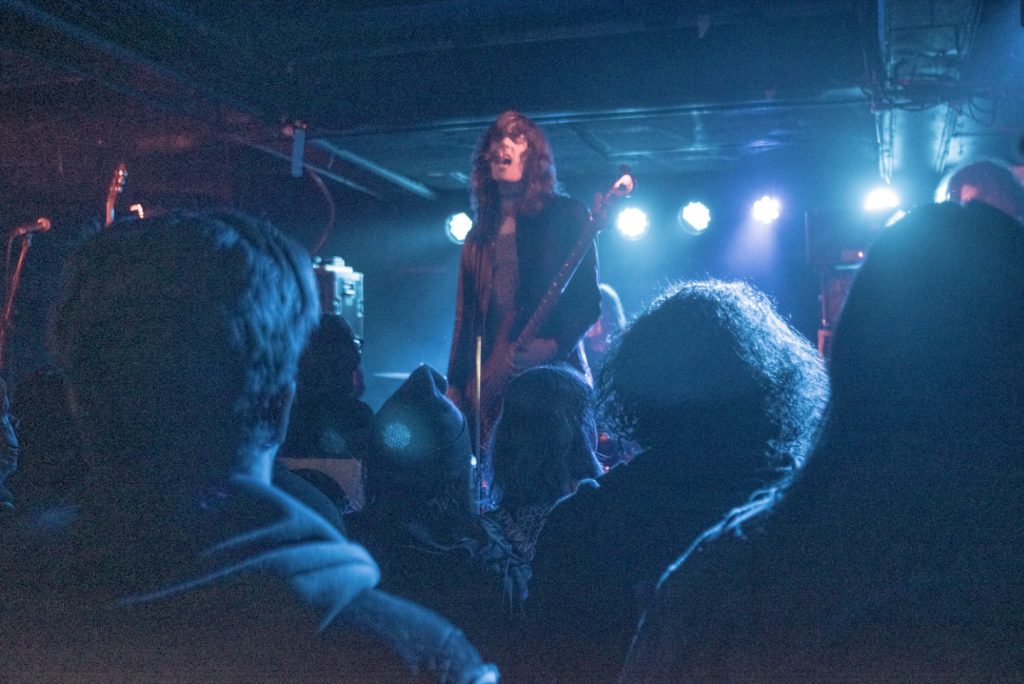 The lead singer and guitarist Clayton “Claythanas” Burgess chose to sport a leopard print tank and leather jacket, corresponding nicely with his luscious, curly power bangs and a cheetah print Marshall head. The whole band gave off a very Guitar Hero vibe. Songs “Show Me Your Skull” and “Permanent Darkness” flexed their technicality and otherworldly psychic connection to each other, ripping through chunky breakdowns in near-perfect unison without any visual communication with each other. Some diversity was displayed in “(Won’t You Be My) Gravedancer”—best described as a doo-woppy, rhythmic ass-pounding. Fan-favorite “You Know Who” showcased the band’s unique take on 80’s speed-riff metal. 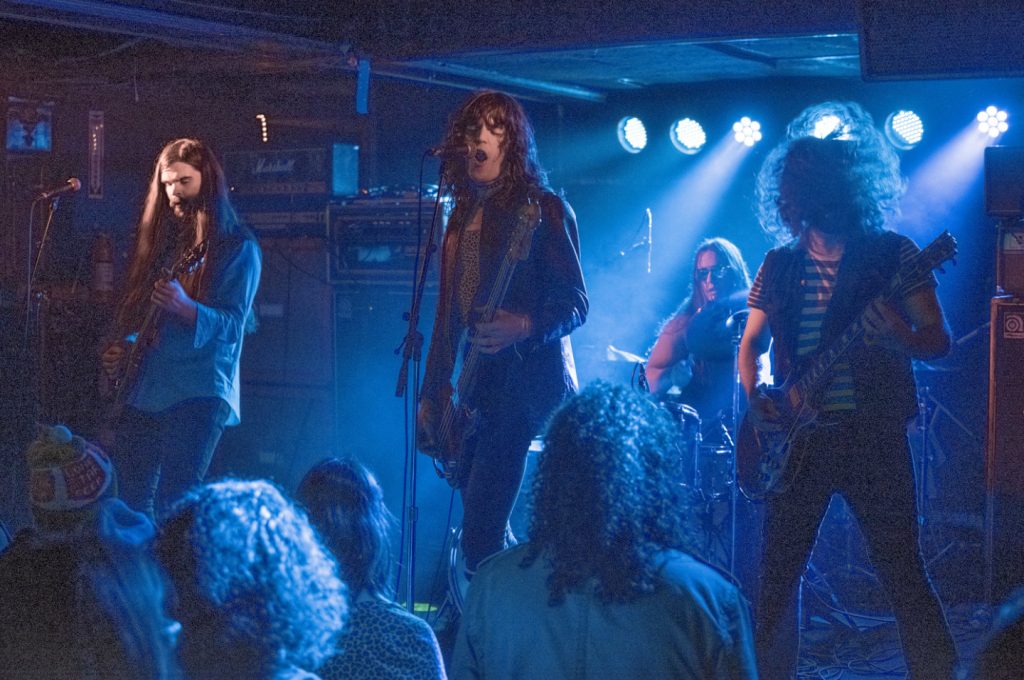 All in all, the Satyrs effectively communicated their stated intentions of exploring the metaphysical realm connecting the lawlessness of biker horror films (such as the band’s titling inspiration Satan’s Sadists), the speed and aggression of 70’s and 80’s American punk rock icons Black Flag, and the psychedelic, doom-infused atmospheric metal produced by the band Electric Wizard (who, in 2014, accepted Burgess into their band after hearing SS’s demo tapes). 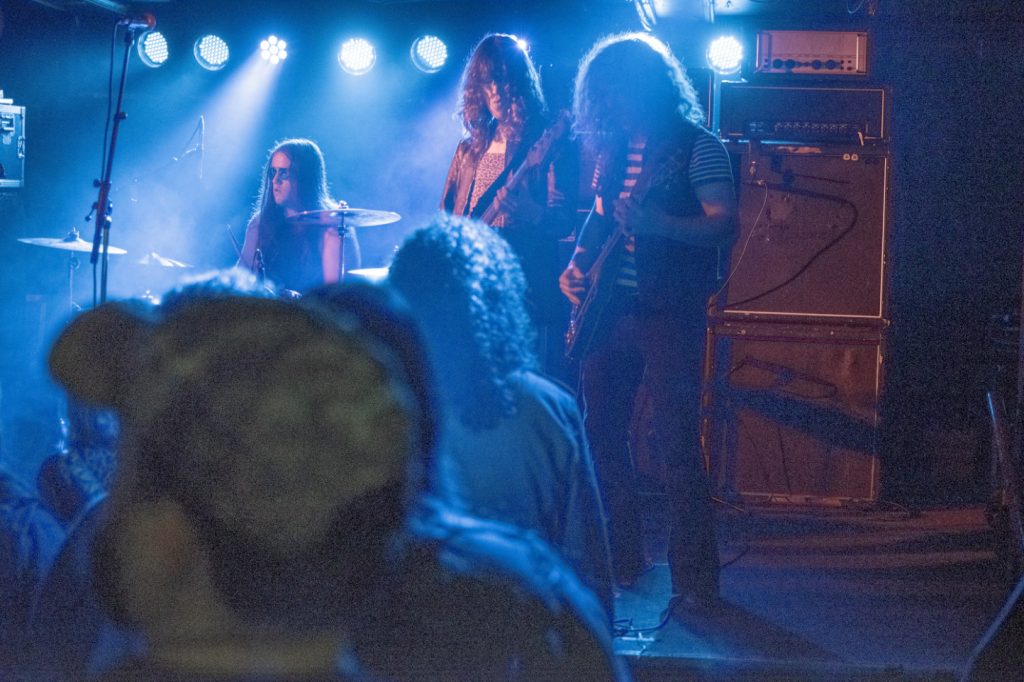 My only gripes: they played fast the whole time. Which, I know, is kind of the point. But had they slowed down in certain strategic spots, letting the audience marinate in some of the breakdowns and solos, going for a thicker, goopier vibe, they would do a better job of attracting the sludge and doom crowd we all know and love. They closed out their set with a jarring rendition of “Creepy Teens”, a fitting segue into the cascading hellfire to be produced by Windhand. 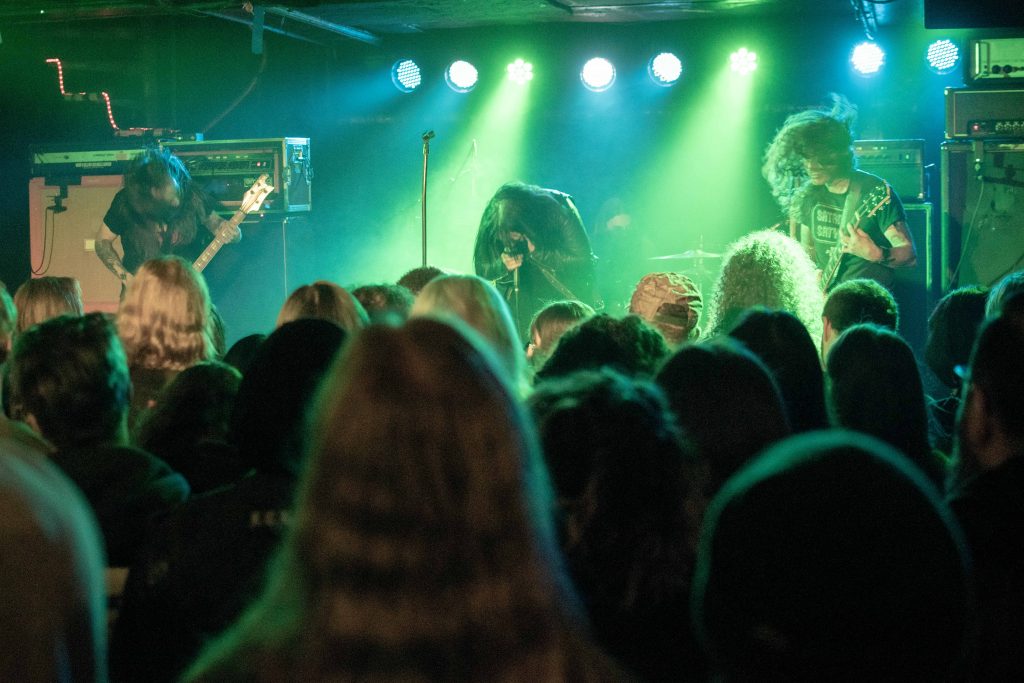 Ghostly organ music and the sound of creaking wood set the stage for the spooky shit to come as the three horsemen and one horsewoman who compose Windhand emerged from the mist, carefully inspecting their instruments as if polishing swords in preparation for battle. I thought immediately of the infamous stand at Helm’s Deep. After opening with an absolutely unrelenting delivery of “Fake Pariah”, the band fixed some issues with the mix, giving the audience ample time to brace themselves for what was to come.

The short breaks in between songs, usually filled with small talk, stalling, and jovial banter about the musicians’ careers, politics, and the like instead left the audience treading water in goopy sound soup–probably with some sort of melted cheese on top. It was dense. It was muddy. Anticipation built, and the tension mounted, and just when you thought it would never end, the silence that was actually not a silence at all was snapped, like a diver leaping from the platform, and with perfect form and without producing a splash, Windhand laid into yet another face melter, spewing sparks and lava as they blew through “First to Die” followed by “Forest Clouds”. 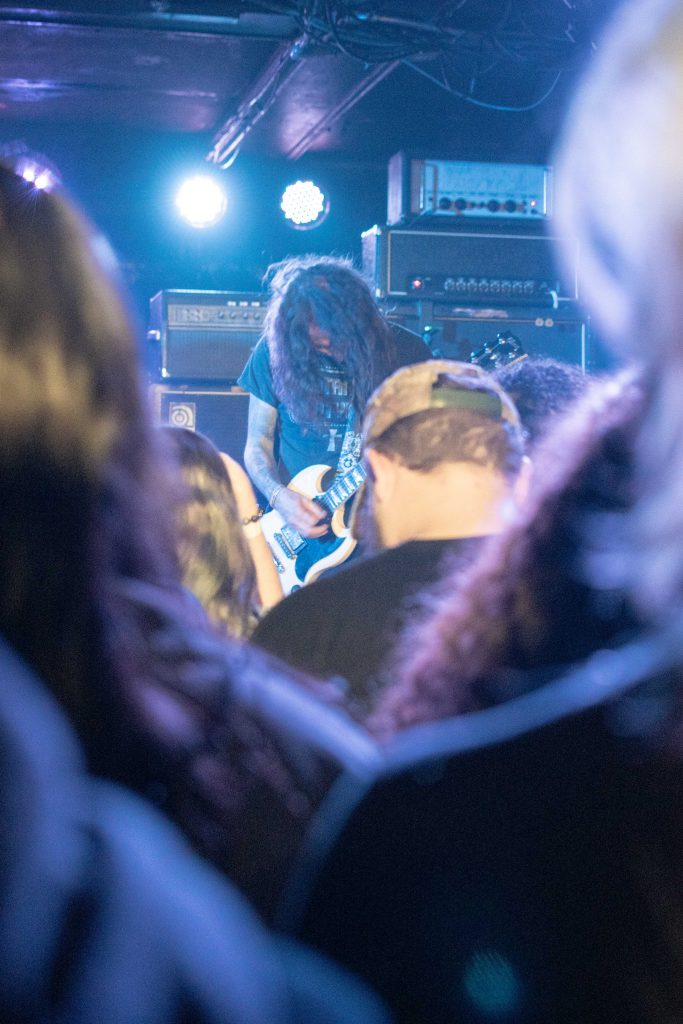 They selected randomly throughout their entire discography, which was came as a pleasant surprise seeing as how they released Eternal Return, their fourth full-length studio album, just a month and some change before the show. Mixed in were expertly cascading, feedback-heavy, distorted guitar solos that made prominent use of a wah pedal and felt like avalanches piling onto the crowd. I noticed that lead guitarist Garrett Morris sported a Satan’s Satyrs shirt. G Move. Windhand slid effortlessly into a ¼ speed actuation of “Grey Garden” that then shed its cocoon as if a mummy suddenly come back to life, ripping through centuries old layers of resin-coated linen to reveal a shrieking and angelic guitar solo, sequenced differently than in the studio-version of the song. 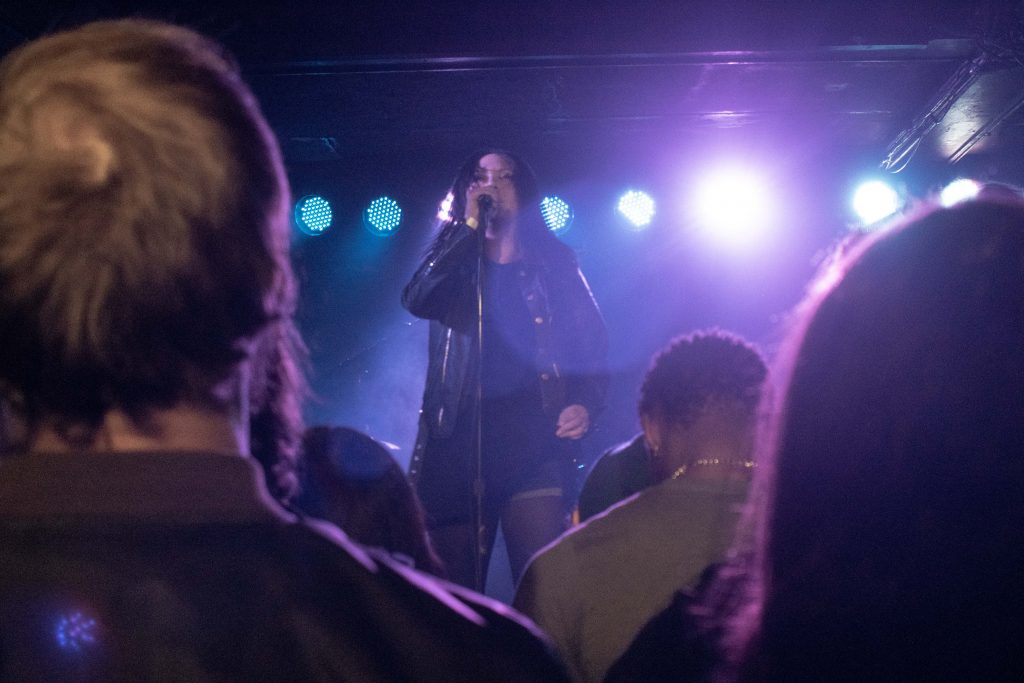 Lead singer Dorthia Cottrell’s anguished, groveling voice was met with a performativity I didn’t expect. She wandered around stage in a ghostly trance, gazing out above our heads at something we could not see. Spooky indeed. The set was reminiscent of the atmosphere conveyed by an Edgar Allan Poe poem—simultaneously frantic but pessimistically resigned. Imagine a kerosene-soaked witch at the moment of ignition, but rather than scream or cackle as you might expect, she just sort of sighs.

Often overlooked, drummer Ryan Wolfe consistently laid down light, splashy cymbal work overtop of heavy, even bone-shattering tom and bass rolls, providing a delightfully complex undercurrent to the set—subtext, if you will. This in combination with Morris’s stylistic doom shredding conjured thoughts of ancient mammoths struggling against an eminent wave of hot tar, or maybe a vicious overtaking of an ankylosaurus by a small but battle-hardened pack of deinonychuses. 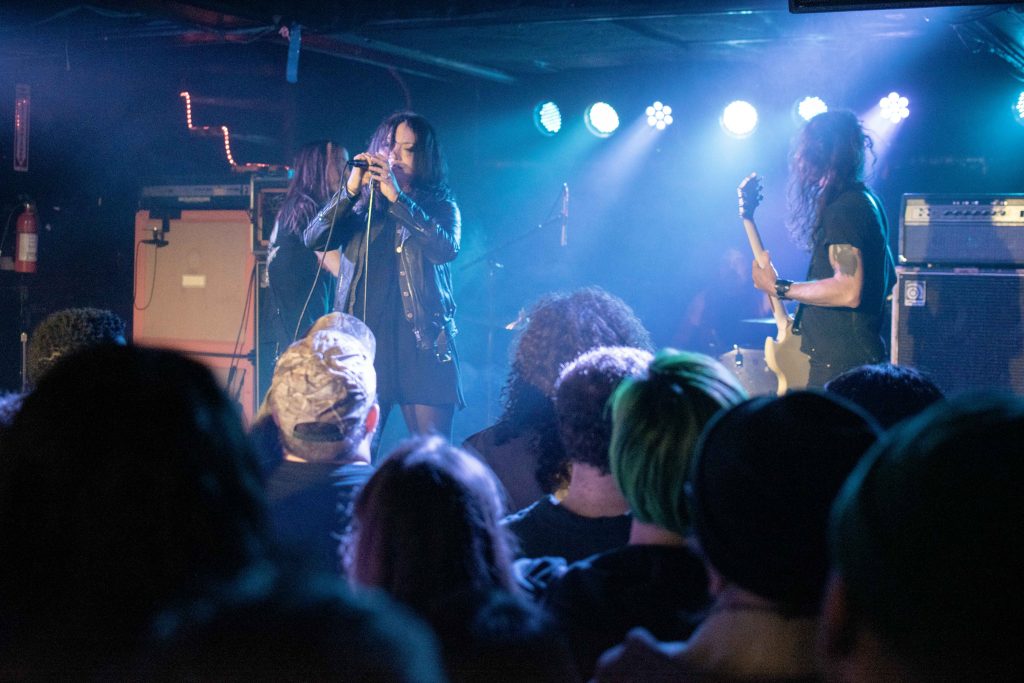 Windhand has been one of my favorite doom bands as of late, and for good reasons—all of which were reflected in their live show. They are one of the best groups around when it comes to the metered, spaced out riffs that deal mostly in mid-tones but somehow feel sludgier than anything else I’ve ever heard. Their songs all sound the exact same, yet almost completely unrecognizable. Like the same piece of meat cooked in entirely different ways. They can be technical, they can sweep pick, and they can be brutal sounding, like a dark churning ocean as it meets with a jagged, moonlit cliff side, or maggots chewing through a rotting appendage. They’re great to listen to while you read, sketch, ride your bike, dismember a corpse, or fold your laundry, and they’re absolute must-see’s if they’re coming to your town. They made one thing abundantly clear: Don’t sleep on Windhand. 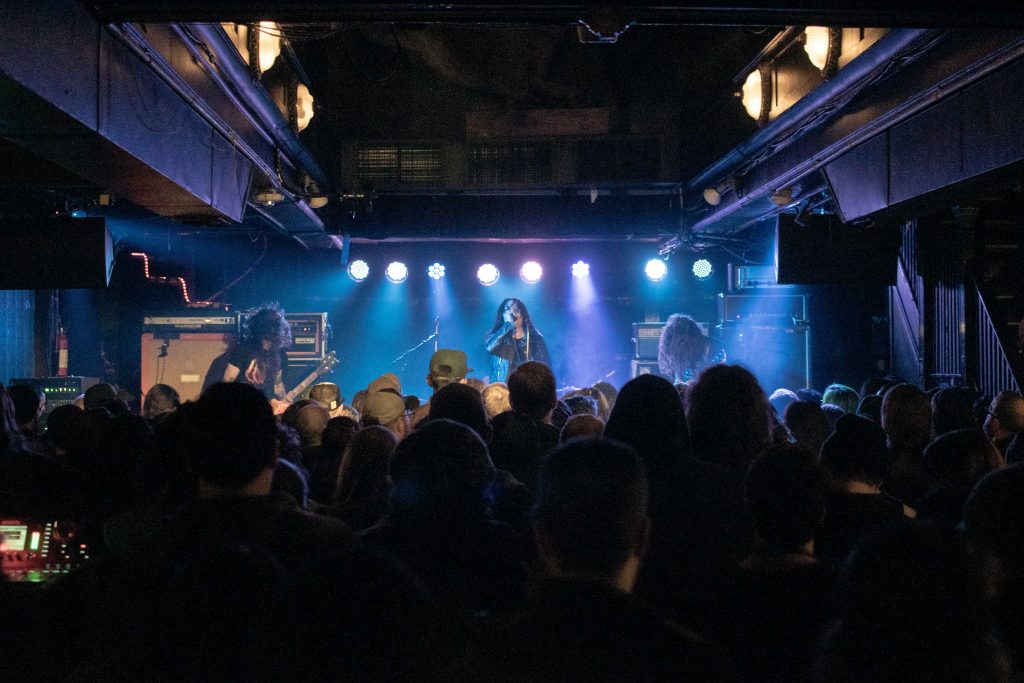