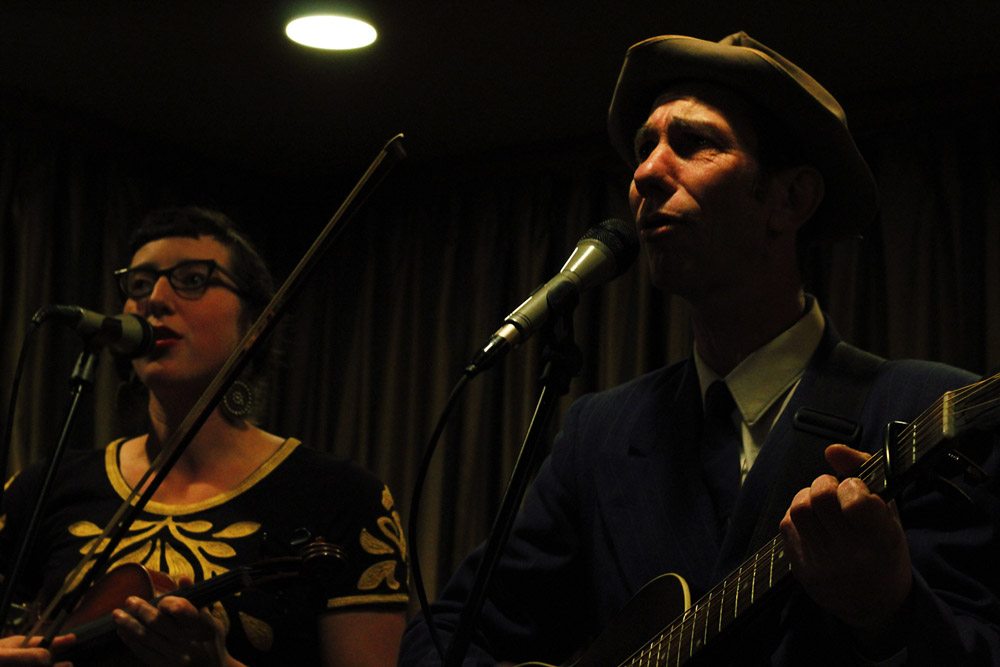 The Yellow-Bellied Sapsuckers are a small-town Wisconsin band that plays old-school country, ragtime and vaudeville-style music. The guitar/fiddle duo released their sophomore album, Ocooch Mountain Home, a combination of covers of 1920’s folk songs and original work, in 2015. They played Honky Tonk BBQ in Pilsen Nov. 14, and WNUR chatted with them via phone the next day.

Yellow-Bellied Sapsuckers: On Humor and Heartwrench

[su_quote cite=”Nina Matti”]”No matter the tempo of the song, audience members were dancing. Couples square danced and slow danced—even made dances up. A particularly drunk man was even dancing up and down the stage stairs…”[/su_quote]

After learning that The Yellow-Bellied Sapsuckers, a guitar and fiddle duo known for their old-school country jams, were playing a venue called Honky Tonk BBQ in Pilsen, I wasn’t sure what to expect. But come the night of the show, it all made sense.

Honky Tonk’s rustic, Western-style wood paneled walls were covered with murals of icons like Frida Kahlo, and perfectly complemented the Sapsuckers’ toe tapping fiddle tunes. In the beginning of their second set, fiddle player and vocalist Nikki Grossman even broke out into folk songs by renowned Spanish-American guitarist Lydia Mendoza.

The pair played three sets, covering songs from their two albums while also incorporating covers of other artists. Grossman, along with Joe Hart, a vocalist and guitarist, kept the crowd guessing by mixing their upbeat tunes such as the instrumental “Toothbrush Ho-Down” with slower, more heartfelt songs.

One of the highlights of their performance was “The Crazy Rag,” a song from their recently released sophomore album, Ocooch Mountain Home. In an interview, Hart confessed that he wrote the love song for Grossman and joked that it “sealed the deal” for her.

But to keep the mood light despite the sometimes heartwrenching lyrics, Hart broke out the kazoo for a few rousing solos, all of which were crowd pleasers.

No matter the tempo of the song, audience members were dancing. Couples square danced and slow danced—even made dances up. A particularly drunk man was even dancing up and down the stage stairs during “The Crazy Rag” while clapping offbeat.

As evidenced by their band name and song titles, The Yellow-Bellied Sapsuckers clearly have a sense of humor. One could tell they are the kind of people you would want to invite to a party and they had audience members dancing and laughing all night long.

Both band members have unique vocals and immense talent and the duo’s onstage banter was a clear indication of how compatible they are.

Keep an eye out for them, because if they’re returning to Chicago you don’t want to miss it.

[su_pullquote]”I guess when we call ourselves a modern country band we mean that we’re alive and we’re writing music. ” — Joe Hart[/su_pullquote]

WNUR: What were your impressions of playing in Chicago, as it was your first time playing here?

Joe Hart: It seemed like people were really familiar with the kind of music that we were playing, which helps.

How did The Yellow-Bellied Sapsuckers originate?

Hart: I had another band, and my fiddle player had to bow out for a little because he had a new baby. Nikki and I knew each other from playing in the old music scene. People just kind of know each other and we had played together before in social settings. I had a couple weddings coming up I needed a fiddle player for, so I hired Nikki. We really hit it off. We make a good team and decided to make it official.

You’ve been commended in the past for your unique band name; is there a story behind “The Yellow-Bellied Sapsuckers”?

Grossman: Early on when we decided to be a band and we needed a name, we were trying to think of things we had in common that we were passionate about. One of those things was making maple syrup. We had been trying to think of a name related to that, with like sap and stuff. And we were like, “I don’t know, what about Yellow-Bellied Sapsuckers?” And we liked it. Because it’s goofy and we don’t take ourselves too seriously, so this is gonna be our band name. (laughs)

Ear to the Ground Music named you guys one of their “Five Americana Bands You Have to Hear to Believe.” What was your reaction to that?

Grossman: We couldn’t believe it! (laughs)

Hart: It’s always great to be recognized. We worked really hard on that record, [Ocooch Mountain Home], and we had a really good support team in place to help us do it. The guy that recorded and engineered, Tom Herbers, is a really well known Minneapolis producer and engineer. Our friend Patrick Harrison who played accordion with us helped a lot as well. It was a great process and it’s awesome to see it recognized in the press and know that other people like it, listen to it and enjoy it.

You definitely have influence from the 1920’s country scene, but in a press release you called yourselves a modern country band. How do you find the balance between these two distinct identities?

Hart: I guess when we call ourselves a modern country band we mean that we’re alive and we’re writing music. (laughs)

Grossman: It’s been a little confusing to people that we say that, so we probably shouldn’t say that as much, (laughs) but we mean it!

Hart: If you look at the music industry, the way it’s structured today, you obviously see that top level of star people, but there are thousands and thousands of musicians underneath them, like us, that are making a living and writing good material. As far as I’m concerned, that’s as much modern country as a country song on the Top 40.

What are your biggest musical influences?

Hart: We have a really eclectic taste. We listen to everything from the obvious 1920’s Brother bands and country western.

Grossman: The Blue Sky Boys and The Louvin Brothers are two of the big ones.

Hart: We cover a lot of those kinds of bands. But we also listen to hip-hop. We love the 70’s British folk scene…

In the beginning of the second set, Nikki, you had some amazing solos, some in Spanish. What were the influences behind those?

Grossman: Yep! Oh man. First of all, I don’t have any Latino heritage at all, just to straighten that out. (laughs) I just kind of accidentally stumbled on that kind of music at one point and got obsessed with it, particularly one artist called Lydia Mendoza. She was American but spoke and only sang in Spanish. She played a 12-string guitar. Actually the guitar I was playing is a replica of one of her guitars. It was made by a friend who lives in Madison. I got into her music and I learned enough Spanish so that I could learn the songs. I was having a lot of fun with it, and then our friend later made that guitar for me. Ever since, I’ve been trying to incorporate her songs into our sets. I always get a good reaction and the songs are beautiful.

Hart: It’s also very parallel to the other kinds of music we like to do…

You guys just released Ocooch Mountain Home this past year, but what do you see as coming up next for you?

Hart: Right now we’re really focused on booking our summer. We would really love to play more festivals. They have a really good family-centered vibe, and they’re a lot of fun. We’ll start thinking about recording in the fall of next year. We don’t have a solid plan yet, but we’ve kicked around a lot of ideas.

To keep up with The Yellow-Bellied Sapsuckers, visit their website.