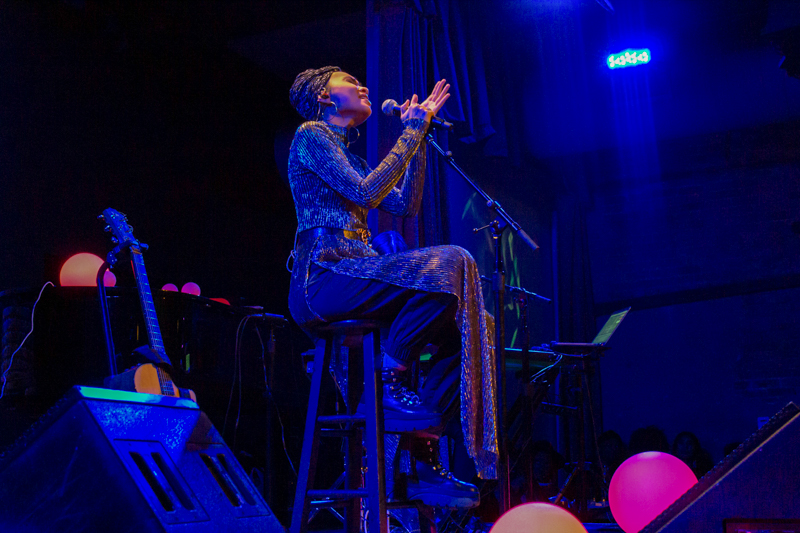 Listening to Yuna’s heartfelt discography will transport you to a therapeutic plain filled with self-reflection and a sense of resurrection. And during her Chicago stop at the City Winery, she did exactly that in front of a dedicated turn-out of a crowd. Backed up only by her two bandmates, Yuna was able to wax and wane her soft, aerial voice while occasionally picking up a guitar to prove what she does best: a stripped-down, acoustic show.

She started off the night with a hand-full of upbeat selections off of her fourth studio album, Rogue. “I’ve been doing this for four years,” she joyfully revealed, only to be greeted by grand applause. She also showed immense gratitude for the people that helped her throughout her musical career, starting with her label. For tracks such as  “Castaway” and “Live Your Life,” Yuna thanked the likes of Tyler, the Creator, Pharrell Williams, and other artists who lent their musical craft during collaborative sessions.

Yuna also got to show off her immense pride for her home country: Malaysia. During songs, she educated the crowd on both the beauty and madness of the country, even delving into Malaysia’s messy politics in recent years. For the song “Forever More,” she explained, “I wasn’t happy with the politics in Malaysia and we were under a very interesting leadership. We’re slowly building up again though and I wanted to write a song about unity.” While exposing the harsh reality Malaysia has faced in recent years, Yuna also combated the ugliness with deep passion and love for her country. She revealed her most special and favorite spots of Malaysia with her music video for “Forever More” and constantly joked about inviting the crowd to drink coconut juice on the warm Malaysian beaches and islands.

As the time together slowly started to reach an end, the audience’s brewing excitement for a specific one song was bubbling after each performance. This song was indeed Yuna’s most popular hit “Crush,” the sultry, confessional duet with R&B legend Usher. Yuna, completely aware of the crowd’s anticipation, teased at the timing of the song’s performance. When mentioning Usher’s interest in one of her earlier songs “Coffee,” she let out a laugh as the crowd nearly jumped up from their seat at the mention of Usher’s name. “No, not that one!” she exclaimed. “That one is coming later.” And when that later finally came, Yuna seemed to finally give in to the audience’s desire almost haughtily. Nonetheless, her performance of the song was elegantly executed and perfectly ended her show, leaving every one of her witnesses with a gleaming memory of her fluttering voice.

For such a laid-back show, I was thoroughly impressed with Yuna’s stage presence and vocal projection throughout the night. All though she never moved from her spot on a high stool, her mastery in voice control and emotional translation had not only my whole attention, but also captivated every person in the venue. I wish Yuna nothing but the best on the continuation of her U.S. tour and hope to hear new material soon.