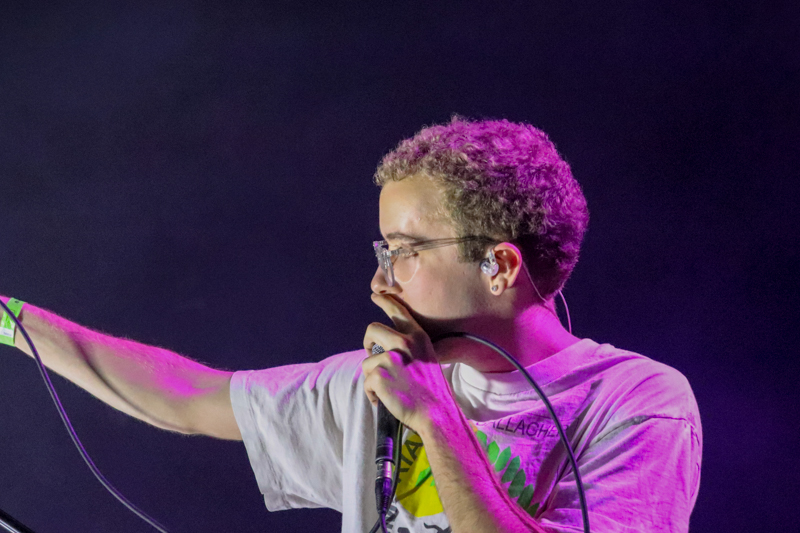 It was a tough night at Lincoln Hall.

The night started off fine — with his sleeves covering his hands, Zack Villere’s slow songs and monotone vocals came together to generate a satisfyingly soft stage presence for a small Wednesday night show. Mentioning the snowstorm, Villere began by joking with the audience about how he wasn’t fitted for the weather.

“My shoes aren’t meant for this weather. They look pretty shitty right?”

The energy in the hall was pretty relaxed, matching Villere’s vibe and his music. It’s hard to categorize his sound, and even Zack has a difficult time describing his music in interviews. A nice bedroom indie pop mix inspired by the likes of Tyler the Creator and accompanied by slushy sweet stream-of-consciousness lyrics, Villere attracts a wide variety of listeners.

Still, the eclectic audience was a bit too chill for Zack. No one in the crowd was moving or pushing around, but as someone listening, it didn’t feel like the right thing to be doing. He called out the audience while taking a minute to tune, “Y’all are so quiet,” said Villere. “It’s sick that y’all are respectful but it’s really terrifying.”

The audience laughed it off, but the show went downhill from that moment as relaxed turned to apathetic. Whenever Zack spoke to the audience, it was only complaints of how awful his day was, and apologizing for his own performance due to his bad mood, saying “Fuck me I have no energy right now. Have y’all listened to Cardboard City? I haven’t heard it yet. I bet it sucks,” referring to his latest album that dropped a few weeks ago. At first, the audience found it a bit funny, then his genuine tone really began to set in; Zack’s bad mood definitely made his set way worse.

People tried to encourage Zack by cheering him on after “Redline”, the first upbeat song of the night. However, as soon as the audience started moving and bumping, Zack immediately brought it back down and defeated the crowd’s efforts by saying “It’s just one of those days, this show sucks dick.” The set was disappointing, and barely slogged on.

As someone near me in the audience yelled out, it was a long night of one step forward and two steps back. He spent the night repeating the same complaints, and ended up speaking a bad show into existence. I’ve been a fan of Zack Villere’s music for a few years, and was genuinely looking forward to seeing him live – I’m pretty bummed this is my first negative review. I still definitely appreciated the music when he wasn’t talking down on himself, and think that it would’ve been a great show if Villere would’ve been into it, too.

I think it might be better to let his music speak for itself. We hope your day got better, Zack.